The Three Point Molly is a betting system based on craps. There is no easy way to implement it on other games. The concept is simple -- The player keeps making pass or come bets until he has at least three, backing them up with full odds.

Using the Three Point Molly will give the player a house advantage under 0.5%, which is very good. It doesn't achieve this via the betting system, but because the player is making very good bets to begin with. I used to play this system, not knowing there was a name for it at the time.

The following rules understand the player knows the rules of craps. If you don't, please at least review the rules of the pass, come, and odds bets in craps before going further.

Here is the short version of how to play the Three Point Molly. Make a pass or come bet every roll, until you have three numbers covered. Back up all pass and come bets with the odds, preferably the maximum multiple allowed.

Next, here is the longer version of how to play the Three Point Molly.

The player will have to decide how much money a betting unit is. For example $10. It will have to at least be the minimum pass line bet. Every pass or come bet will be for one unit.

To analyze the Three Point Molly, I ran through over 32 billion sessions playing it via computer simulation. I assumed the player always took full 3-4-5x odds. Here are some statistics about what to expect per session, defined as playing until the shooter sevens-out.

The spoiler box below shows the raw results of the count of each net win in the simulation.

The following chart shows the probability of a net win of -25 to +100 units. 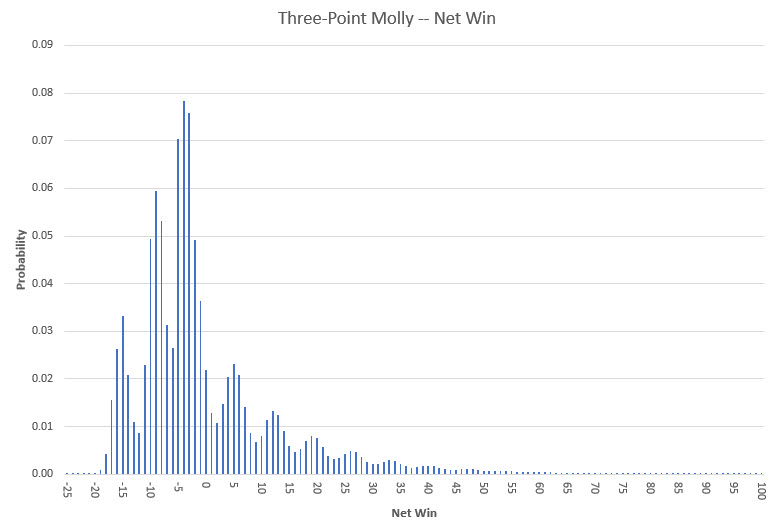 I ran a separate simulation of 7.6 billion sessions that looked at the net points won, not counting wins on a come out roll (because the odds were turned off). The spoiler button below shows the results.

Please enjoy my video on the Three Point Molly.

Improving on the Three Point Molly

The player can lower the overall house edge from 0.405% to 0.374% by keeping the odds on a come bet working on a come out roll.

What is important in gambling is the game played, bet made, and sometimes your skill in making decisions. What is not important is the reason for making a bet. For that reason, betting systems are not mathematical voodoo that put the odds in the player's favor. No, not only don't betting systems lower the house edge, they don't even dent it.

The great thing about the Three Point Molly is not the method, but that it's played on very low house edge bets. The pass and come bets carry a 1.41% house edge, while all the odds bets carry a 0.00% house edge. Taking a blended average, the overall house edge is 0.40%. It is hard to beat that in the casino.

Discussion about the Three Point Molly in my forum at Wizard of Vegas.