On March 3, 2012, I participated in the Scale the Strat fundraiser for the American Lung Association. It's a timed race to climb the stairs to the top of the Stratosphere Tower. This sounded like a fun way to exercise, and the money was going to a good cause, so how could I refuse? This blog entry is about my experience.

If I'm not mistaken, the terms to enter were a $50 immediate donation/registration fee with the promise to raise at least $150 more in pledges. If the pledge quota was not reached, then I would be on the hook for the difference. So I wrote about the climb in my forum at Wizard of Vegas and ten members were kind enough to make donations: Chad S., Scott P., Scott S., Nedson S., John Z., Tim B., Alan V., Jaime G., Steven H., and William Tr. Not counting my own $50, the amount raised was $322.08.

I had about a month advance notice only to train. You might think I would hit the stair machine at the gym as often as possible, but the truth of the matter is I only managed to get on it four or five times. Four two weeks of that time, I was sick with something like a cold, but accompanied by a very bad cough. Lots of people in Vegas seem to been afflicted by the same thing, but I've yet to meet anyone who had a convincing diagnosis for it.

However, on my side is the fact I climbed Mount Shasta in the summer and ran the Las Vegas half marathon in 1:49 in December. I'm no slouch even on a bad day, so I wasn't worried. I was mainly concerned about getting healthy in time, which I pretty much did.

A few days before the climb I was told to show up at 10:00 a.m. Like at the marathon, they gave me a timing chip to put on my shoelace. Coincidentally, I was in the same starting group as K.M., my proofreader, who inspired me to do the climb in the first place. The officials staggered the start times over about three hours. The registration was outside the front door. At 10:00, I was called inside the stairwell with about 30 other climbers. We climbed up about two flights to the second floor of the Stratosphere where they had us wait several minutes so the previous group could clear out. Then they individually started us in 30 second increments so we were safely staggered in the stairwell.

Before I go further, let me give you some details about the Stratosphere Tower. They claim it is 108 stories high, with an observation deck with thrill rides at floor 108. One floor below that is the "107 Bar." However, I beg to differ that the tower is 108 floors. Let's compare it to the Empire State Building, which is 102 floors, with a roof height of 1250 feet. The Stratosphere claims to be 1,149 feet high, which includes the spire at the top. The rides level is at 866 feet. The end of the climb was one level below the ride level. All things considered, I would say the timed portion of the climb was about 830 feet. That is 66.4% of the height of the Empire State Building, or a comparative equivalent of 68 floors.

When it was my turn to start, I burst past the starting line like a bullet. For the first ten flights, I skipped stairs and ran as if the cast of the Big Bang Theory was at the top and ready to leave. It would probably surprise nobody that I'm a big fan of the show.

Despite going fast, I couldn't help but notice that that there was something fishy going on with the numbering of the floors. I think they started somewhere in the twenties and that some of the floors in the twenties and thirties were skipped. Whatever was going on, I somehow was past the 40th floor within a few minutes, which makes no sense. In the Stratosphere's defense, they are not the only place in Las Vegas to be deceptive with their floor numbering, evidently in an effort to appear taller than they really are.

However the floors were numbered, my initial exuberance had to peter off eventually. The ladies don't call me the 60-second wonder for nothing. At this point I had to take it slower, hitting every step, and at more of a fast walking speed. Eventually I regained my composure and picked up my pace, but it was not nearly as fast as when I started. A rhythm that I found suited to me was to alternate skipping stairs on every other flight and to try to maintain a steady but fast walking speed. During this time, I passed several other climbers. I can be a competitive SOB and always enjoy beating other people at anything.

You might be wondering what it looks like inside the shaft of the Stratosphere. The stairway is narrow, about four feet across, and made of corrugated steel, which is ideal for climbing. The surface was not slippery like concrete, and it didn't absorb energy like carpet. The handrails on both sides were close enough that you could reach out and grab them simultaneously, making it easy to balance and to use arm strength to help. 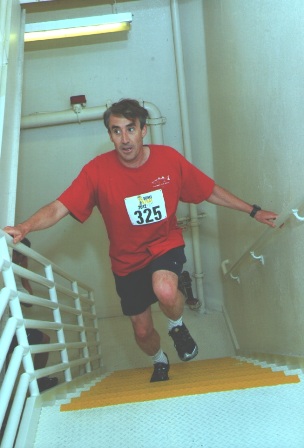 To the side one could look up or down a long ways. At two points along the way, about floors 50 and 70, there were elevator-accessible platforms. For this event these platforms had about six chairs for weary climbers, stacks of water bottle cases, and paramedics at the ready.

After about 12 to 13 minutes, by my watch, I sadly reached the end. I was enjoying myself and could have kept going much further. As I crossed the finish line, they gave me a towel and a medal. There was juice, water, oranges, and bananas available. Unlike at the Las Vegas Marathon, the bananas were ripe.

However, I was initially not ready for any of that, so I found a quiet spot to rest. As my heart rate slowed down, I suddenly had a huge coughing fit. I'm sure not sure if it was that I was still a little sick, winded, or that that the staircase was dusty. Probably some combination of all three. Yet I overheard somebody say it was less dusty than the previous year. It wasn't just me coughing; I heard a lot of it from the other climbers. Eventually I composed myself and drank some orange juice. I found a table by an attractive young woman by herself. We sat there quietly for a while until she broke the silence. A pretty gal speaking to me who isn't being paid to? That doesn't happen every day ... or every year. What did she say, you might ask? "Your nose is bleeding." Between that and the coughing, I must have made a dreadful sight.

After I pulled myself together, I went to check the times on a nearby monitor. Mine was 12 minutes, 41 seconds. I'm sure that means nothing to most readers, so let me put it in perspective. Here is how I did based on the published results:

How did the Wizard Compare?

In closing, I'd like to give due credit to the organizers for putting on a good event. From the moment I stepped into the building from the parking garage, helpers were identifying those in athletic gear and directing them on where to go. At the registration, there was no line and plenty of people standing around available to help. My corral time of 11:00 started exactly on time. During the climb, there was somebody about every three flights offering water and assistance if needed. At the top, several people congratulated the winners and there was plenty to eat and drink. Plus, I got a free picture, which I never knew was taken. It isn't the most flattering picture of me, but I'll let you see it anyway.

The organizers also set up a viewing area in a showroom so climbers' family members and friends could watch the event unfold. Four cameras, positioned at the start, finish, and the two emergency platforms, relayed real-time video of the climbers in the stairwell to a large screen. K.M.'s mother-in-law snapped this fuzzy picture when K.M. crossed the finish line. 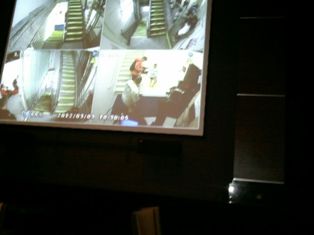 This is an annual event, with 2012 being the fourth occurrence, although the first time I did it. I hope this will inspire some of my readers to join me next year. If you don't plan on being in Vegas at the time, there are similar events in towers and skyscrapers around the world you can look into.