For a few years now I have had only one advertiser on the website, Bodog. This is a good time to give readers an update about them. In recent news, Bodog has just started serving Canadian players. It is ironic that they haven't served Canadians before now, since Bodog was founded in Canada, and has had offices there since it started. But I am getting ahead of myself so let's back up.

Bodog was started by Calvin Ayre in Canada in 1994. From the beginning, his operation was different than most online gambling sites. Most sites offer gambling and nothing else, and you have no idea whom you are dealing with. There are no names of any staff, much less pictures of them, just boilerplate marketing hype. A typical "About Us" page might offer useless drivel like "Here at [insert casino name here], we pride ourselves in offering you an exciting, reliable and trustworthy service. Using our advanced gaming software, we are able to bring you some of the best interactive gaming experiences available online!" I actually took that from an actual online casino's website just now. But with Bodog you could see actual people involved, including Ayre himself. For a while Bodog also rounded out the entertainment experience by producing sporting events and running a music label. This was a far cry from its competitors, and it has been successful. Ayre was featured on the cover of Forbes 2006 in an article about billionaires.

In late 2006, the U.S. congress passed the UIGEA bill, which restricted banks from handling online gambling transactions. The Justice Department was also stepping up actions against the industry. The legal future for the industry was uncertain, which probably weighed on Ayre's next big decision. Instead of operating the Bodog gaming websites directly, he would license the brand name to other companies. Those other companies would basically be buying the right to offer online gaming under Bodog's name. This is akin to how the Subway restaurant chain works. The parent company does not actually run any of the restaurants. Instead they sell the right to run a restaurant called "Subway" to individual licensees. In 2007 Bodog licensed the right to run Bodog.com to Morris Mohawk Gaming Group, based in Kahnawake near Montreal, Canada. Later they licensed Bodog88.com to a company that serves Asian players, and Bodog.co.uk to "Bodog Europe" which serves European players. And just this month, Bodog Europe has been granted a license to serve Canadian players through Bodog.ca. It is rather ironic that Canadians couldn't play at Bodog before now even though Bodog was started there and has always had a presence there, and it is also ironic that the licensee serving Canadian players isn't the one based in Canada, it's the one based in Europe.

There are a number of different websites associated with Bodog, so it can get confusing. That wasn't helped by Bodog losing its main domains in a patent dispute in 2007, though this year they were able to get them back. When Bodog temporarily lost Bodog.com in 2007, it quickly re-established itself at NewBodog.com, and then BodogLife.com. But now it's back to plain Bodog.com. Players in Canada, Europe, and Asia who go to Bodog.com are automatically redirected to the licensee's website for the player's area, which are Bodog.ca, Bodog.co.uk, and Bodog888.com respectively. Finally, there is BodogBrand.com, the website of the parent company which licenses the brand to other operators.

With all these different Bodog companies you might be wondering who exactly is buying the advertising on my website. Originally it was Bodog itself, before they had licensees. Once Bodog went the licensing route, my relationship has been with Morris Mohawk, the licensee for U.S. players. Incidentally, I recently visited Morris Mohawk's offices in Kahnawake, and I will be blogging about that soon.

Admittedly, this look at the business model is probably more than most players care about. In both 2006 and 2009, a U.S. player going to Bodog.com would have pretty much the same experience, not realizing that there was anything different behind the scenes. The look and feel of the website and the gaming experience are basically pretty much the same. The main thing that's different today is that for the first time, Canadians can play at Bodog too. 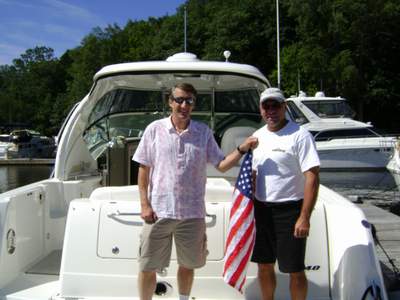 This picture is of Alwyn Morris and me on board Alwyn's boat, near Montreal. He kindly put out the US flag, in my honor. Alwyn is the leader of the Morris Mohawk Gaming Group.

My thanks to Michael Bluejay for his help with this blog entry, who knows Bodog history and organization structure better than I do.