I like to bet all the numbers in craps. How many unique numbers can I expect to hit before a 7-out?

For the benefit of other readers, the question is asking how many of the following totals will be rolled two dice before a total of seven is rolled: 4, 5, 6, 8, 9, and 10.

The answer is 2.375758. The following table shows the probability of each individual possibility of rolling zero to six unique totals in the range specified. The lower right cell shows the average unique totals rolled before a seven.

Is it true the flip of a fair coin is more likely to land face-up on the side that started face up?

The evidence suggests this is true!

Persi Diaconis and Susan Holmes of Stanford University recorded 10,000 coin flips. The coin landed on the same side face-up as it started 50.8% of the time (source: The Fifty-one Percent Solution from the newsletter What’s Happening in the Mathematical Sciences by the American Mathematical Society). The probability of a ratio that high or more is 5.48%. 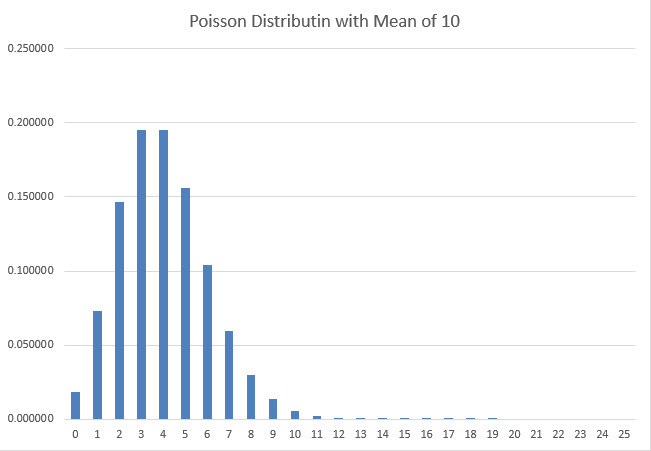 The reasons I chose the Poisson assumption is it follows a near bell curve shape for sufficiently large means and the actual result can never go below zero.

I then calculated the probability of an even number of half-revolutions (resulting in the same side landing face up as the starting position) for various means of half revolutions. The following table shows the results for 0.5 to 5.0 means.

Probability Even and Odd Number of Revolutions

You can see my proof of this formula here.

What is your analysis of the Spelling Bee game on the Price is Right?

For the benefit of other readers, let me go over the rules first.

Here is a clip of the game being played.

The following table shows the probability of winning, according to how many cards the player has, assuming none have been turned over yet.

Before any cards are turned, the player should not surrender, assuming any reasonable value of the car. For example, even with only two cards, the player has a 13.1% chance of having at least one of the CAR cards. The player should be indifferent to a $2,000 surrender value if the car had a value of $15,263.16. Any new car is going to be worth more than that.

The following are the indifference points on the value of the car, according to how many unturned cards the player has.