The answer depends on a and b specifically, but two rules of thumb will address most situations.

If a < e and b > e, then there is not enough information to determine.

Here is the solution (PDF).

A grenade is thrown down a bottomless pit. On average, the grenade explodes in six seconds. The time until it explodes has a memoryless property, in that the probability of an explosion at any given moment is always the same and independent of low long it has been since the pin was pulled. In other words, it’s lifetime follows the exponential distribution. Assume acceleration of 32 feet per second.

Here is my full solution (PDF).

This morning, I was playing craps for about six hours and witnessed the dice landing stacked one atop the other twice. What are the odds? 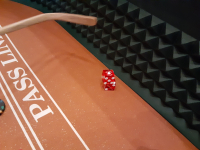 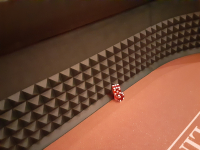 I asked three sources, two of whom have 35 years between them dealing craps. Among the three sources, they have seen one to 1.1 million rolls and seen the dice landing stacked about ten times. This is assuming a rate of play of 140 rolls per hour. All that said, my rough estimate of the probability that any given roll is stacked is about 1 in a million.

Based on the casino and time of day you played, I'm going to assume there were not many players. I will assume 215 rolls per hour for your play. Based on that and the probability for any one throw, I roughly put the probability of seeing stacked dice twice in 1,290 rolls at 1 in 1.2 million.

In your video poker programming tips, you explain how that although there are 2,598,960 possible starting hands in video poker, with a 52-card deck, there are only 134,459 classes of hands necessary to analyze.

My question is how many classes are there for joker poker?

For this one, I turned to my esteemed colleague, Gary Koehler, who is an expert at video poker math. Here are his answers, according to the number of jokers: