Wizard, I challenge you to a bet. Here are the rules:

Do you accept? I will do it as many times as you wish.

Do you have any programming tips for doing the math on a "Multi-way" slot machines like Buffalo?

First, let me explain the question for the benefit of other readers. A popular new way for slot machines to pay is according to every "way" on the screen. A "way" is every unique set of positions that go through a paying combination, counting only reels that are part of the win. Let's look at the following picture as an example from a Buffalo slot: 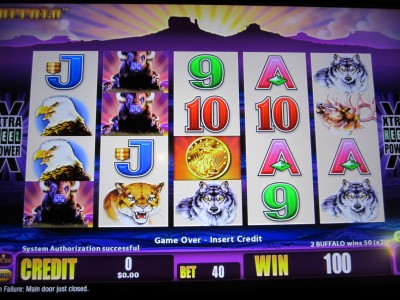 This game as 45=1,024 "ways" to win, because there are four positions shown on each reel. However, in this case, only two ways pay, for two buffalo each. Both include the one buffalo on reel 1. Then 1 way for the buffalo on row 1 of reel 2 and a second way for the buffalo on row 2 or reel 2. Although there are 43 = 64 ways the game could go through positions on reels 3 to 5, it doesn't matter. "Ways" only count the ways to go through symbols that contribute to the win.

With that explanation out of the way, let me introduce some functions for my answer to your question:

What is the probability any given player wins $25,000 in the Showcase Showdown on the Price is Right?

As a word of explanation to other readers, let me explain what you're talking about. The Showcase Showdown is a game played on the game show The Price is Right. In the Showcase Showdown, each player takes his turn spinning a wheel which has an equal probability of stopping on every amount evenly divisible by .05 from .05 to 1.00 . If the player does not like their first spin they may spin again, adding the second spin to their first, however if they go over 1.00 they are immediately disqualified. In the event of a tie, each player will get one spin in a tie-breaker round, the highest spin wins. In the event of another tie, this process will repeat until the tie is broken.

The main purpose of the Showcase Showdown is to advance to the Showcase. However, there are also immediate cash prizes too, as follows:

I explain the optimal strategy to the Showcase Showdown in column #101. Assuming that strategy is followed, the following table answers your questions and various other.