Now that the Barona has removed their single-deck blackjack game, what is now the best blackjack game in America for the basic strategy player?

You are correct. In June the Barona sadly removed their single-deck game, which allowed doubling on any two cards, double after splitting, and surrender. The basic strategy house edge was 0.01%. According to the Current Blackjack Newsletter, that was the best game in America. 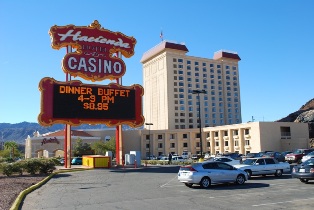 So, who rises to fill the top position? According to my own Las Vegas rule survey, the best game is now at the Hacienda casino, near Hoover Dam. However, I don't keep track of anything outside of the greater Vegas area, so I checked the Current Blackjack Newsletter, which monitors the entire U.S. and Canada. They indicate the Hacienda game is not only best in Vegas but the best anywhere in the U.S. and Canada. So, I congratulate the Hacienda for rising to the number one spot!

The rules of said game are:

Based on my blackjack house edge calculator, the house edge is 0.02%, assuming basic strategy and no cut card. To get this figure, take the "realistic house edge" and subtract 0.11%, what the cut-card effect otherwise costs the player in a single-deck game. Al Rogers, with the Current Blackjack Newsletter, tells me that both the Hacienda and the Peppermill casinos, mentioned below, do not use a cut card, in favor of dealing a specified number of rounds per deck. Single-deck games usually follow the rule of six, which means the number of rounds per deck is equal to max(2,6-p), where p is the number of players.

For players who want to bet over $200 in single-deck games, Al suggested I put in an honorable mention for the Peppermill group of casinos (Peppermill, Montego Bay, and Rainbow) in Wendover, Nevada. They have the same rules, except no double after a split, for a house edge of 0.16%, again assuming basic strategy and no cut card. That is probably the best single-deck game that is open 24-hours and doesn't mind large bets.

Shameless Plug: The Current Blackjack Newsletter lists the rules and card-counting conditions for every legitimate casino with table games in the U.S. and Canada. The monthly reports are $15 each, $30 per quarter, or $99 per year. I've been using it as an invaluable resource for over a decade.

At a Texas Rangers baseball game a fan fell 20 feet to his death trying to catch a ball. How long would the fall have taken?

First, for those readers who are easily offended, I apologize if it seems I am making light of this tragedy. That is not my intent. This is how the question was asked to me, and I don't see any reason to sanitize it to dropping a brick from a rooftop. That said, here is my answer...

The rate of acceleration is 32.2 feet per second per second. As you may remember from beginning calculus, velocity is the integral of acceleration. So v=32.2t + c. The constant of integration c is 0. Why? At the moment an object is dropped it has no velocity. A way to visualize that is if you throw a ball straight up in the air at the exact moment it reaches its highest point or apex, it is just hanging there, velocity and gravity exactly canceling each other out.

The distance the object traveled is the integral of velocity. So d=16.1 t2 + c. There is that pesky constant of integration again, but it is zero again here as well, because at the moment you drop a ball (t=0) the distance traveled is 0.

We know the unfortunate guy fell 20 feet, so we just need to solve for t.

I heard there is a lottery game in Massachusetts that is vulnerable to advantage play. Do you know anything about it?

You must be referring to the Ca$h WinFall game. I first learned about this from the article A game with a windfall for a knowing few at the boston.com web site.

It is not unusual for the jackpot in progressive lottery games to get so big that the return exceeds over 100%, before considering taxes, annuitized payments, the small odds of winning, and the decreasing utility of money for enormous jackpots. After factoring in these things, the lottery is almost never a good bet.

What makes the Ca$h WinFall game different is that when the jackpot exceeds two million dollars, and nobody hits it, they roll all but $500,000 of the prize money down to the lower prizes. That makes a hefty profit almost ensured for groups with six-figure bankrolls.

Let's take a look at the recent July 18, 2011 drawing as an example. It is a simple 6-46 game in which the player chooses six numbers from 1 to 46 and the lottery does the same. The more your numbers match the lottery's, the more you win. The following table shows the probability and return for each event. The win for catching two numbers is a free ticket, which I show separately as having a value of 26¢. Each ticket costs $2, so the return column is product of the probability and win, divided by ticket price. The lower right cell shows an expected return of 117%, or a player advantage of 17%.

Since I initially wrote my answer, the Massachusetts Lottery has restricted the number of tickets any one store can sell in a day to 2,500, or $5,000 worth, according to the article, Lottery restricts high-level players at boston.com. This would obviously make it more difficult to get down huge amounts of money, but it may be good for smaller-bankrolled players, as it should minimize competition from other players. There is only so much money in the "roll down," so the less competition for it the better. I would certainly at least try to play it if I lived anywhere close to Massachusetts.

I've tried to turn my friends on to your Wizard's Simple Blackjack Strategy. However, they find it still too difficult, especially the soft 18 exception. Can you offer anything even more simplified?

Okay, how about this "Extra Simple Strategy." Follow the first rule that applies.

That is just 30 words, counting the numbers as words. The cost due in errors relative to the full basic strategy is 0.44%. That is a lot more than the 0.14% of my full Simple Strategy, but is still about half the cost of errors made by the average blackjack player.