I understand why you won’t publish which casinos have the worst air quality. But is there any way you could publish which casinos have the BEST air quality? On your Casino Air Quality Survey, I see that Strip Casinos #2, #3, and #9 all scored well. My wife and I will be visiting in February (we’re staying at the non-smoking Vdara in City Center) and we’d like to know where to gamble. We found out this morning that my wife is pregnant, and the less second-hand smoke, the better. Thanks!

Congratulations! I hope you’ll use Social Security’s popular baby name lists, which I started, to avoid the most popular names.

I didn’t want to embarrass the casinos at the bottom of my list, because my methodology was not the most scientific. However, I suppose I can offer some praise for the top three. Here they are:

Where is the oldest operating casino in the world?

That would be the Casino di Venezia in Venice, established in 1638.

What was the greatest bonus promotion in online gambling history?

My initial answer was the Golden Palace 20% monthly bonuses, up to bonuses of $2,000, in 1999 and 2000. There were no restricted games and the play requirement was the amount of the bonus only. That came to a sudden stop, unfortunately.

However, after some discussion on my forum, I think that the award has to go to the Casino on Net single-zero roulette promotion, in which they paid 70 to 1 for bets on 0 and 7. That has a player advantage of 92%! I’m told that the casino lost $4 million on that two-hour promotion but paid everybody.

If a monkey was playing with the Rubik’s Cube, what would be the odds of its being in the solved pattern at any given time?

First, it is impossible to rotate just one corner and leave everything else the same. No combination of turns will achieve that. Basically, every action has to have a reaction. If you wish to rotate one corner, it would disturb the other pieces somehow. Likewise, it is impossible to flop just one edge piece. For these reasons, we have to divide the number of permutations by 3 × 2 = 6.

Second, it is impossible to switch two edge pieces without disturbing the rest of the cube. This is the hardest part of this answer to explain. All you can do with a Rubik's Cube is rotate one face at a time. Each movement rotates four edge pieces and four corner pieces for a total of eight pieces moved. A sequence of rotations can be represented by a number of piece movements divisible by 8. Often a sequence of moves will result in two movements canceling each other out. However, there will always be an even number of pieces moved with any sequence of rotations. To swap two edge pieces would be one movement, an odd number, which can not be achieved with the sum of any set of even numbers. Mathematicians would call this a parity problem. So we have to divide by another 2 because two edge pieces cannot be swapped without other pieces being disturbed.

What is the worst hand in Pai Gow? 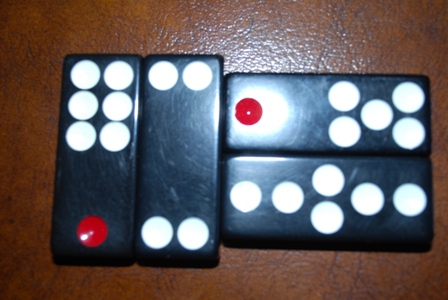 Interestingly, if the player played 0-3, the high hand would be a high-3, which is normally the minimum low hand the house way tries to achieve. I don’t know if that is a coincidence or not.

There is a Super Bowl bet on the number of Scrabble points in the last name of the first player to score a touchdown. The line is 10½ and -115 on both the over and under. Is either side a good bet?

I like creative bets like this. It can be found at the Boyd casinos, as well as the Palms, El Cortez, and South Point. To answer the question I looked at another set of bets on the specific player to score the first touchdown. Those odds are shown in the second column of the table below. For the sake of simplicity, I’m ignoring the field at 5-1, and no touchdown scored at 100-1. I then converted those wins to the &lquofair probability” in the third column, meaning the probability of winning you would need for the bet to be exactly fair. These probabilities are inflated, due to depressing what each win pays, which is why the sum is 166%. The “adjusted probability” in the fourth column shows the fair odds divided by 1.660842, so that the total probability is 100%. The fifth column shows the number of Scrabble points in each player’s name. The “expected Scrabble points” in the sixth column is the product of the probability and Scrabble points. The lower right cell shows the mean Scrabble points is 14.18521.

Unfortunately, by the time I went to bet it the line had moved to -180.

Unfortunately, by the time I went back to the casino to bet it the line had moved to -180.

P.S. Hours before the game I got in a bet at -170. Unfortunately, it lost. The first player to score a touchdown was Jordy Nelson. Nelson has 9 Scrabble points.