I know a lot of blackjack players don't like to split eights against a 9, 10 or ace. Do you think that play is the one most frequently played incorrectly? If not, what do you think is?

The play that I think has the highest probability of being played incorrectly by blackjack players is splitting 4,4 against a 5 or 6 when double after split is allowed. The probability of getting one or the other situation in a six-deck game is 1 in 1135. According to my blackjack appendix 9, assuming the player hits instead of splitting, the cost in expected value is 2.83% against a 5 and 4.38% against a 6. Overall, the house edge of the game goes up by 0.0032% when the player habitually makes this mistake every time it occurs. So, it isn't a very costly error, because it happens so infrequently. However, I don’t think I’ve ever seen another player correctly split in this situation. When I do, the dealers and other players usually roll their eyes. Once I heard another player incorrectly say to the dealer, as if I wasn’t there, "You should never split any hand that starts with an F."

If the question were what is the most costly mistake, considering both the frequency of the play and cost of the error, then I can only hazard a guess. That guess would be that the #1 error is not soft doubling when you are supposed to. Seldom do I see recreational players double a hand like soft 17 against a 6. The following table shows the increase in the house edge as a result of four commonly made mistakes. This table assumes the player always makes the error when the situation occurs, instead taking the second best option. For standing on 12 against a 2 or 3 I did not include a player 6,6.

If I make a pass or come bet every single roll in craps, then how many active bets will I have at any one time? I ask because I’d like to know what a fair average bet should be for such a player.

The average number of bets such a player will have on the table for any one throw is 3.6. If the player is betting $10 at a time, for example, then a fair average bet would be $36. 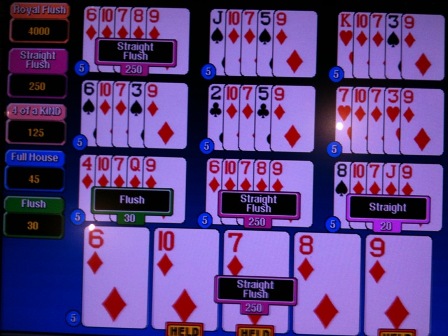 This is a binomial distribution kind of problem. The general formula is that if the probability of an event is p, and each outcome is independent, then the probability of it happening exactly w out of t trials is combin(t,w)×pw×(1-p)t-w.

At a craps table with the Fire Bet, I saw a player make every point except 10, and still rolling. Assuming it was a come out roll, what is the probability of making a point of 10 at that point before sevening out?

On the come out roll there are three possible outcomes at this point.

Let p be the probability of making a 10 point before sevening out. If the player makes any other point, he is right back to where he started from. So...

I was playing video poker in Atlantic City, and I could have sworn I received the same card I discarded on the draw sometimes. If the machine was putting the discards back in the deck, what would be the effect on the odds?

Cryptologic Internet casinos have such a game, called Bonus Video Poker, where discards are put back in the deck. The 40-20-9-6 Jacks or Better pay table in that game returns 95.2642%, before considering the redraw bonus feature, which I won’t get into here. In conventional video poker, that pay table would return 98.2534%. So, in this example, putting the discards back in the deck costs the player almost 3%. However, I highly doubt that actually happened on a machine in Atlantic City.