The player may yell "Stop!" at any time, and he will bank the amount showing on screen. If the player does not stop in time, and the machine runs out of money, then he banks nothing. A hostess provides statistics, such as number of machines left to pick, amount left to earn, average amount needed per machine to win, and what amounts remain in the machines.

This is the kind of thing I could spend weeks analyzing. Unfortunately, I read your message almost three months after you wrote, due to a large backlog of “ask the Wizard” questions. The Wikipedia page seems to indicate that that show was a flop, and was canceled. However, it still makes for an interesting problem.

The hostess conveniently tells you the average amount you need per remaining machine to reach your game. After hours of scribbling, I can’t come up with anything better than setting a stopping goal of about 25% higher than the required average. That is just an educated guess, so please don’t ask me to prove it is optimal. As you noted, also ride the gaps, never stopping just before an amount that was already picked.

If they should bring back this show, I hope my UK readers will let me know. This is the kind of puzzle that I could become obsessed with, like the Eternity puzzle, which was coincidentally (or not) also out of the UK.

If I flip a coin 1,000 times, what is the probability that I will see a streak of at least 10 heads or tails in a row?

Funny you should ask; another reader just sent me an academic paper on this topic. This paper includes the following graph, which shows the probability to be about 62%. 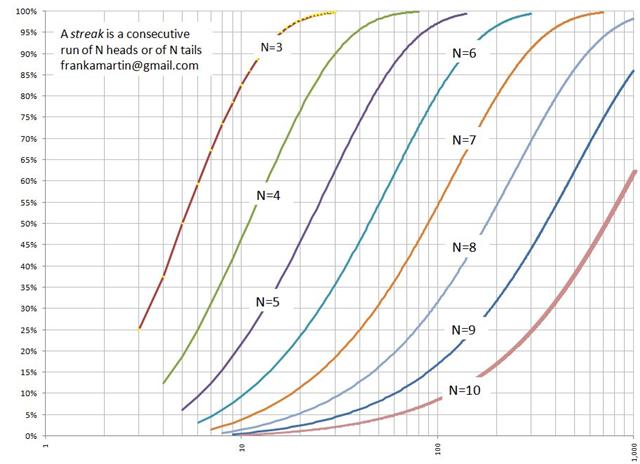 For more on this topic, please visit What were the Odds of Having Such a Terrible Streak at the Casino? (483K) by Frank Martin.

In Las Vegas can I use a hint/cheat sheet chart while sitting at a Blackjack table?

Yes, as long as it doesn’t slow down the game too much for other players.

My wife wants to win big on slots. She has $5 free play. What is her best strategy? She is not interested in prolonging her time playing and will leave after her initial $5 is used up, she will not play any won money.

I would play once on a $5 three-reel single-line game. Win or lose, walk away after one spin.

What happens if you are caught counting card on a cruise ship? Will they evict you at the next harbor, or...directly throw you into the sea?

They make you walk the plank.

Just kidding. Speaking only for the Norwegian Star, they politely inform you that blackjack is off limits, but you’re still welcome to play any other game. The same way they usually do in land-based casinos. Other cruise ships probably do the same thing.

Most to all of our casinos here in OK require a blackjack player to ante $0.50 every hand. Obviously, this gives the house a huge (probably insurmountable) edge. The rules they play by are generally hit on 16, stand on soft 17, blackjack pays 3-2, no surrender, double after split. What effect does this have on house edge and is the only way to reduce that edge to increase your bet? I was estimating 10% (because you’re really betting $5.50 to only win $5). Is the math really that simple?

If you are wagering $5, not including the 50-cent fee, that increases the house edge by 9.09%! The general formula for the increase is c/(b+c), where b=bet, and c=commission. Assuming 60 hands an hour, the commission will cost you $30 an hour (ouch!).

For the benefit of other readers, the Oklahoma casinos are much like those in the Los Angeles area, where players take turns banking. If you can afford the risk of paying off all other wagers at the table, then by all means, do so. When it isn’t your turn to bank, don’t bet.