I realize that decisions per hour in games like blackjack and craps can depend heavily on factors like the number of other players at the table, the hand shuffle vs. machine shuffle, shooter and dealer speed. Still, I was curious if you could give me a rough approximation of how many decisions per hour an individual can expect at a mostly-full craps table and a blackjack table with both a hand shuffle and machine shuffle. This would help me estimate my expected loss per hour and weigh it against the comps I am being offered.

The following tables show the number of hands/tosses per hour in blackjack, craps, and roulette. The source of the tables is Casino Operations Management by Jim Kilby.

Hands per Hour in Blackjack

Rolls per Hour in Craps

In craps 29.6% of total rolls are come out rolls, on average.

Spins per Hour in Roulette

I have reviewed your site and am looking for casinos in Nevada and Mississippi that have the best pay out schedules for each table game (I prefer 3 card poker). Do you have a listing or link that shows the "loosest table games" casinos?

I have thought about that many times but always shoot down the idea because it would be very high maintenance to keep it up to date. I do know they have full pay 1/4/6/30/40 pay table on the Pairplus in Three Card Poker at the Pioneer in Laughlin. At least they did when I was last there a few months ago. As far as I know every casino in Vegas follows the stingier 1/3/6/30/40 pay table.

The radius of the circle is 1. The triangle is equilateral. Find the area of each colored region. 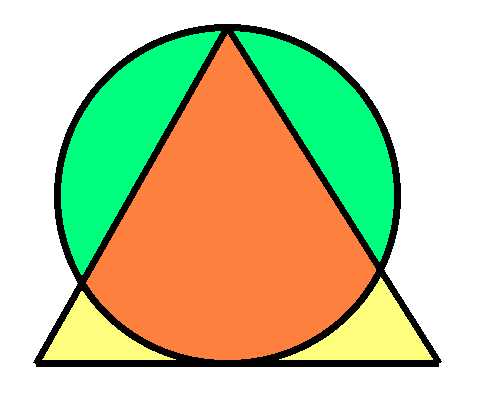 I don’t want to blow the answer for those who want to solve it for themselves. For the answer and solution visit my other web site mathproblems.info, problem 189.

What are the chances in a heads up game of Texas Hold’em that each player gets KK. Then on the very next hand both players get KK. We can’t even get a close estimate. If you can figure it out please respond, thanks.

I have tried to get the exact odds of getting a royal straight flush in a 7-card game. I hit one at Foxwoods the other day.

Yes. I can just imagine the follow up question to be why I recommend taking the odds if doing so doesn’t help to win more. What I suggest is betting less on the pass so that your need for action is mostly met by a full odds bet. For example if you are comfortable betting about $90 per bet, and the casino allows 5x odds, then I would drop the pass line bet to $15 and bet $75 on the odds. That will lower the overall house edge from 1.414% to 0.326%.

I’ve finally accepted a job in Vegas, and the family will be moving in less than a month. What areas of Vegas are nice to live, what areas are undesirable?

For family living the nicest areas are indeed Henderson and Summerlin. Personally I live in a master planned community called Peccole Ranch, which borders Summerlin. In my opinion the west side, where I live, is better because:

If you ask someone from Henderson they will claim Henderson has less traffic, but there are two sides to that issue, and I think the west side is better in that area too. I’m sure I will hear from somebody from Henderson over this, and am happy to print a rebuttal in the future, because I believe in presenting both sides.

The worst parts of Vegas are around downtown, gradually getting better as you move further away. For something in the middle there is lots of growth on the south side of town along the I-15 and the north side along the U.S. 95.

In Texas hold em if a player accidentally shows his cards before betting round is complete is that player’s hand dead?

No. It would still be a live hand.

Is Timbuktu a real place and if so what country is it in?

Yes. As I recall it was a great intellectual city in Africa that had a magnificent library. However the library was burned down and not much remains of the once great city. Here’s more information about Timbuktu from MrDowling.com.

When my boyfriend and I first started dating there was this girl that would flirt with him all the time. Well I told him to ignore her or it would be over. He did, or so he said. We drove passed her yesterday and he smiled at her. I got mad at first then I just let it go. He started yelling at me and told me that he could say hi to her whenever he wanted. What I don’t get is that he gets so jealous whenever I talk to one of his friends. Does this mean that he could be talking to this girl behind my back? PLEASE ANSWER ME!!!!!

I’m not big on jealousy. It should be okay for either of you to be friendly with the opposite sex. Even light flirting can be okay if it just in fun and goes no further than that. If you don’t have trust in a relationship then it is bound to fail. My advice is to put your relationship to the test and allow flirting on both sides. If that causes the end of it then it wasn’t meant to be in the first place.