In part 1, I showed you how to do everything except for this last yellow layer. It's a prerequisite that you already know how to solve the Rubik's Cube, so this video will only be dealing with three different parity problems that you may encounter.

This is a common one right here. I think, you get it 50% of the time. You can identify it as happening when you have one or three yellow sides on top, and the odd numbers are bad. 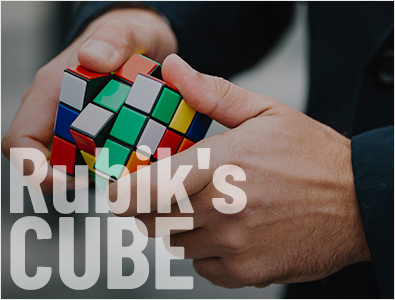 As you may know…

…from the Rubik's Cube, when you get to this point, either zero, two, or four of these yellow edges will be on top, but with the Rubik's Revenge, it could be one or three. If you have one, put that one yellow side of the edge on the top in the front, upper position.

If you have three that are on top…

Put the one in the middle in that same position on the front top. Then you're going to do the following algorithm. I know there's other algorithms out there that do this, but every other algorithm that I've seen to do this seems to be equally as long and complicated.

I would not be tricked by any videos that say that they have some super-easy way to do this because, in my opinion, they're all about equally as long. It's just something you're going to have to either memorize or go off of notes. Again, we put that one yellow edge in the front top, and you do the following.

That changed us to a situation where one is wrong - to where one is right to where none are right. Now, we're to a good situation with an even number. Even numbers are good. Then we do the same algorithm which you should know from the Rubik's Cube. With none are [sic] right, you can put this any position you want and do Front, Right, Upper, Right Prime, Upper Prime, Front Prime.

Front, Right, Upper, Right Prime, Upper Prime, Front Prime. Now we have all four yellow edges on top, so we're ready to go on to the next step. What do you know? It's already correct. Green, orange, blue, and red. That's not too easy, so let me gaff this to make it a little harder. 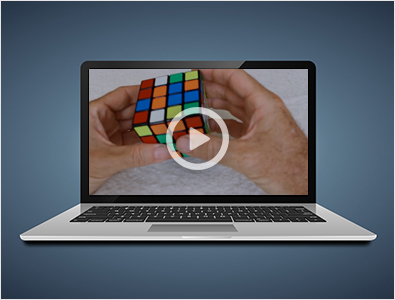 Okay, usually, you're left with a situation that's like this:

Here, look for a situation where two of these sides of the edge match the center. Here, one matches and none of the others do, so only one is right. Let's rotate it and count again. Zero, zero, zero, zero. None are right.

Let's rotate it again and count:

…if the two correct ones were on the left, on the right, or across from each other, you would put them on the left and the right and do that same algorithm. All this is explained in my Rubik's Cube video. Now we're ready to worry about the corners. One, two, three. Okay. Now, we want to -- Take 2.

Okay. We are now at the point in the puzzle where we need to position the yellow corners. Let's count how many are already right. That's correct, it's in the right position. Wrong, right, wrong. If two of them are wrong, then what you need to do is go through an algorithm that I'm about to explain. It means you have a parity problem. 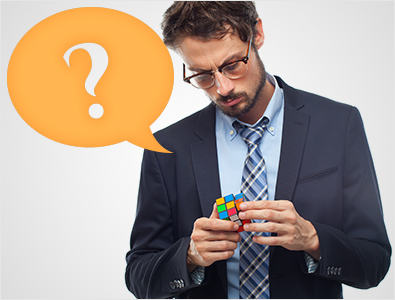 Right now, they're diagonal, so we're going to rotate these corners via the algorithm that you should know from the Rubik's Cube which is -- Okay, guys. After that corner-flipping parity algorithm, we are basically in a situation where we can solve it using Rubik's Cube algorithms.

Here we are in the familiar situation where one corner is correct and the other three are in the wrong positions. You put the correct one on the upper right, and you go Upper, Right, Upper Prime, Left Prime, Upper, Right Prime, Upper Prime, Left. Let's reevaluate. Correct, wrong, wrong, wrong. Sometimes, you need to do it twice. I know there's an algorithm for rotating them the other way, but I don't remember what it is.

Let's do this one again:

They are all in the correct positions. Now we just need to orient some of them. I'm going to go over this fast because it should be stuff you already know from the Rubik's Cube. You want to put any incorrect ones on the left side here, have any incorrects in particular corner on the upper left, and you just keep doing this over and over until this one is right.

How does it go?

I hope you understood that. If you like this, please thumb me, or better yet, subscribe to my Wizard of Odds channel. If you didn't like it, I apologize. These cubing videos are not easy to explain, if that's a good excuse.