For this week's newsletter I would like to review the show The Illusionists, currently playing a long engagement at the El Dorado in Reno. I saw the show on Friday, May 17.

The show features five outstanding performers: The Showman, The Trickster, the Mentalist, the Manipulator, and the Escapist. Each of them had a different and specific area of talent. The theater is very comfortable and a nice size, with 11 rows of seats on the main floor. The show actually begins well before the official start as the magician wander the aisles performing tricks and some people filling out cards for a mind reading trick later in the show.

I was by myself so easily got a great seat up front at a very reasonable price. On the stage was a bar selling drinks and a magician doing card tricks. I consider myself a very amateur magician so was eager to watch. As I approached, the previous couple watching just left, so I said something like, "Please do another one." He proceeded to do a trick, of which the details I don't remember, but I stood there quietly and watched. When he was done I something simple like, "That was good, thank you." To which he immediately said, "You're a magician, aren't you?". How he knew, I have no idea. However, it was a high compliment to have a real magician think I was one.

It turns out the one doing the magic trick at the bar was the trickster of the five illusionists. He also served as an informal emcee and was easily the funniest of the five. I do not recall the details of any tricks but many involved walking about the theater and doing up close tricks to random audience members. Wandering cameramen and a huge video screen ensured the whole audience could enjoy it.

The manipulator was the best slight-of-hand magician I have ever seen. Again, I don't recall many specifics, except that he seemingly made hundreds of playing cards appear out of thin air. As someone who knows a little, these kinds of tricks are among the hardest to pull off and thus get my greatest respect. By the end of his main routine, there were cards all the stage. It is hard to find enough superlatives, but suffice it to say I was amazed and I'm somewhat hard to please when it comes to magic. 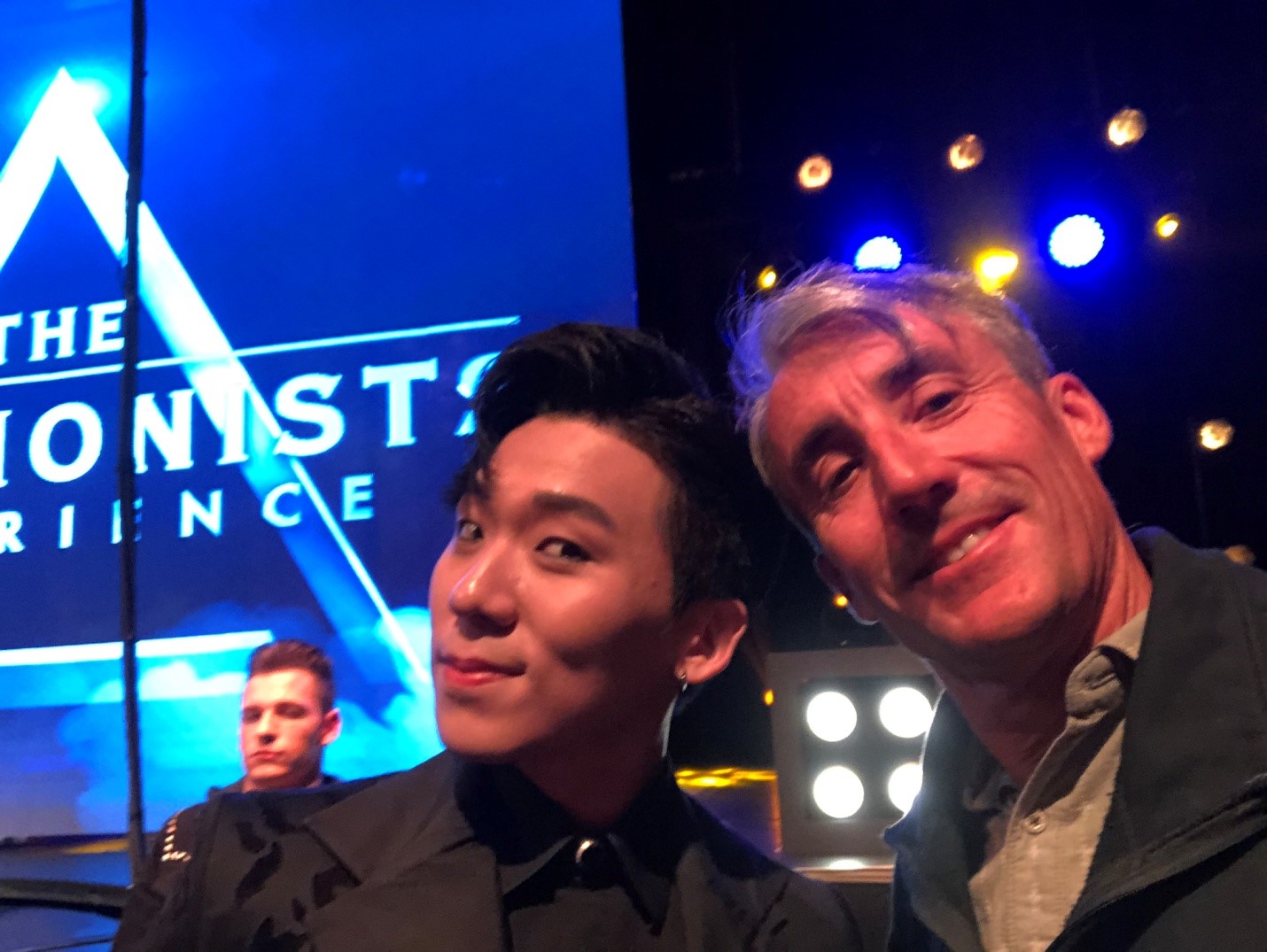 However, the kind of magic I'm most interested in at the moment is mentalism. To be honest, I don't know much about how it's done, which may explain why I'm so fascinated by it. Through his act he approached random audience members and told them very obscure things they were asked to think about. Meanwhile, his act was quite funny in a Mo Rocca nerdy kind of way. I would love to see him do an entire show of his own sometime.

The showman was a French magician who did some bigger illusions. Again, sorry, I don't recall the details very well. I should have had the idea at the time to take notes for this newsletter. Finally, the show ended with the escapists doing the Houdini water torture escape, except without a curtain covering the tank. Sure enough, he did it, in just over two minutes.

The overall show was not each member taking his turn, but more informal with each illusionists coming and going at various times. Meanwhile the Trickster kept everything flowing. After the final water torture escape they stayed on the stage to meet the audience. I always like it when performers do this. I briefly chatted with the Manipulator and the Mentalist. The Mentalist seemed like a very nice guy, asking me where I was from. When I mentioned Vegas, he told of his recent trip and the magic shows he saw there. In retrospect, I wish I had chatted longer with him, but I was kind of star-struck and at a loss of words. I attempted to get selfies with both of them, but the one with the Mentalist didn't come out well, but here is the one of the Manipulator.

Tickets start at $39.95 (or $47.55 after taxes and fees), which of the quality of the show is a great price. In case you can't tell, I highly recommend it if you're in Reno. The show web site indicates this show has toured all over the world, so keep your eyes open for it wherever you may go. Finally, I'd like to mention each of the performers by name, out of respect for their talent: