Last week I shared my story of climbing Yosemite’s Half Dome two weeks ago. This week I will share some other pictures taken in a very smokey Yosemite. About a week after I left, Yosemite closed entirely due to unsafe smoke levels. Please keep in mind when you look at these pictures. Yosemite is normally much more scenic. 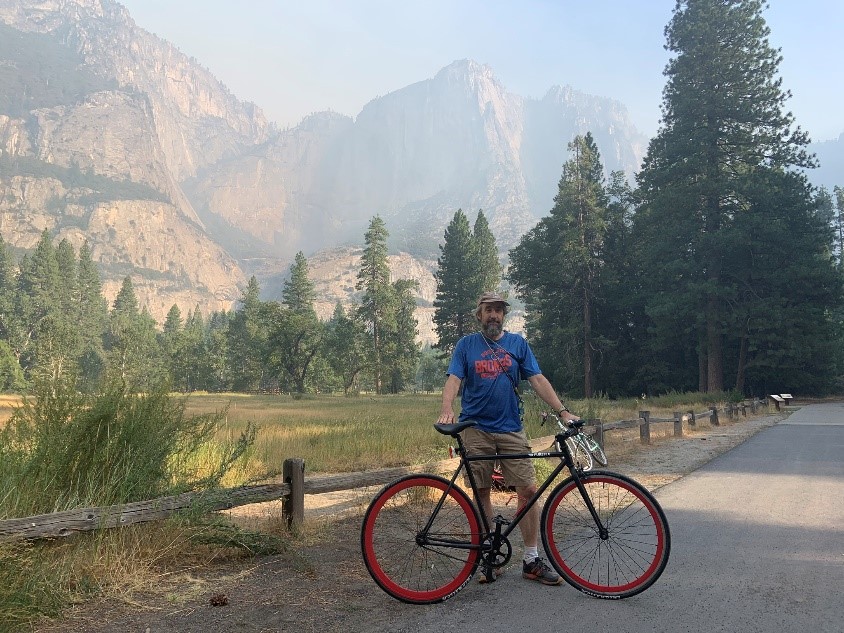 Yosemite has a nice network of walking/biking trails. Bikes are a great way to get around. For one thing, it is good exercise. For another, in a normal year Yosemite has very limited parking and getting around usually necessitates waiting for a crowded shuttle bus. There are places to rent bikes in Yosemite but if at all possible, bring your own. 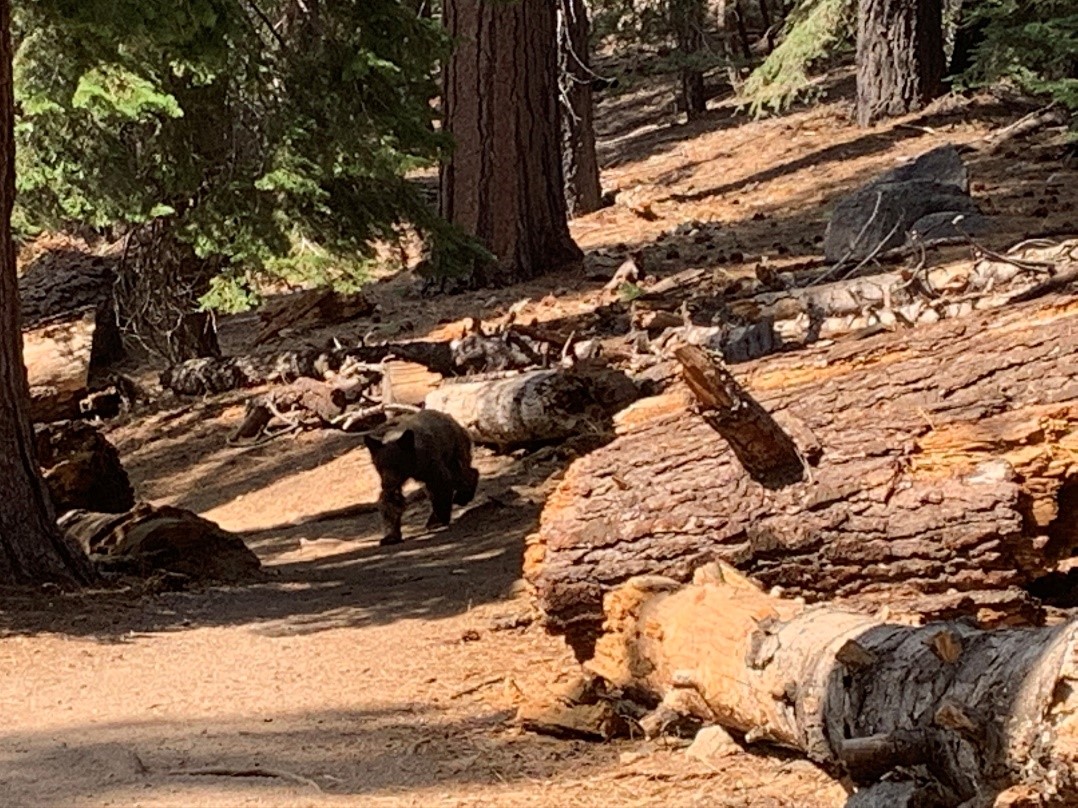 Here is bear sighting #1. You can see him a little to the lower left of the center of the picture. Fortunately, he paid no attention me. He was rather small so, at first, I was worried his mother was around somewhere. However, he seemed to be on his own. 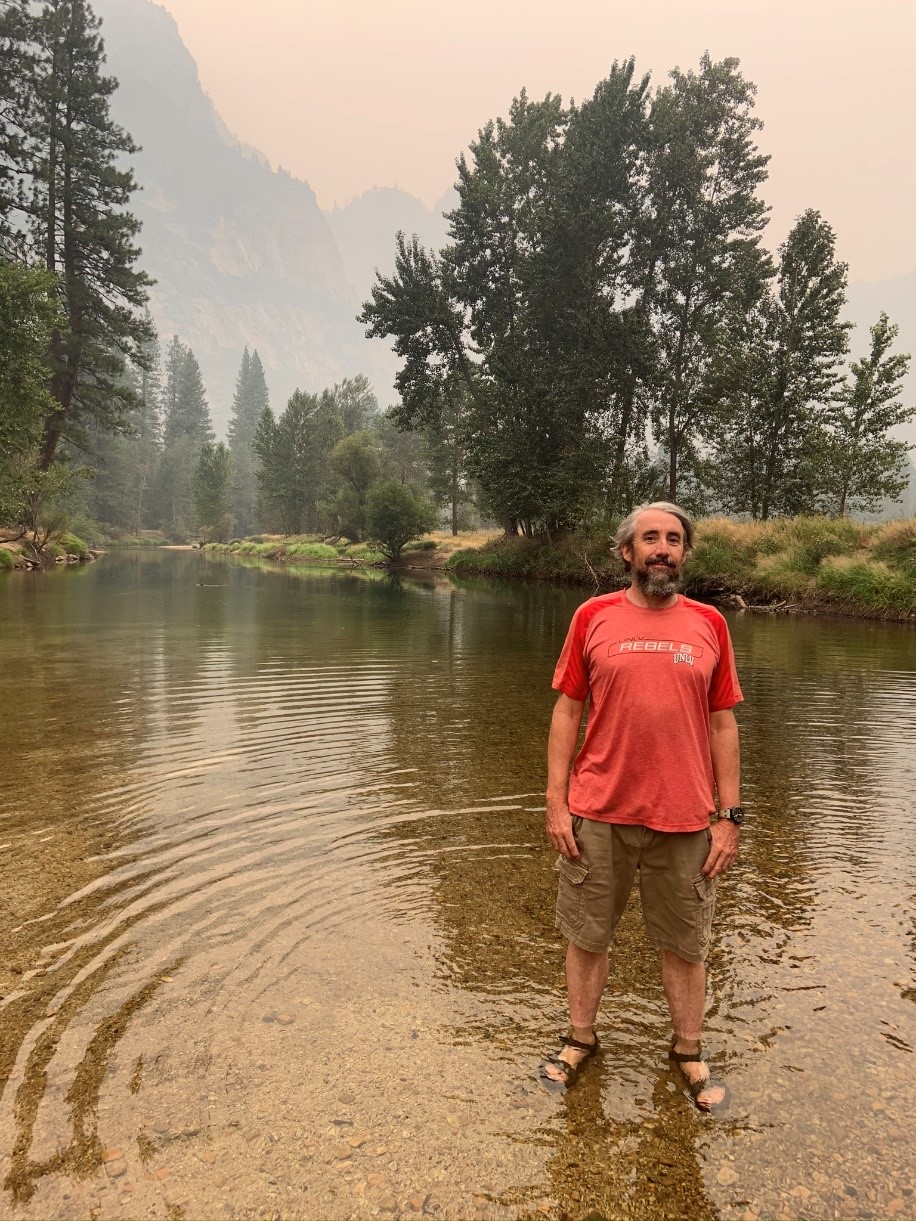 This is the Merced River. The last time I was in Yosemite people were doing innertube rides on it. This time you could walk across and not get your knees wet. September is a dry month for Yosemite with many waterfalls dry or nearly dry. In my opinion, the best time to go is the spring when the water is flowing and before the tourist summer onslaught. 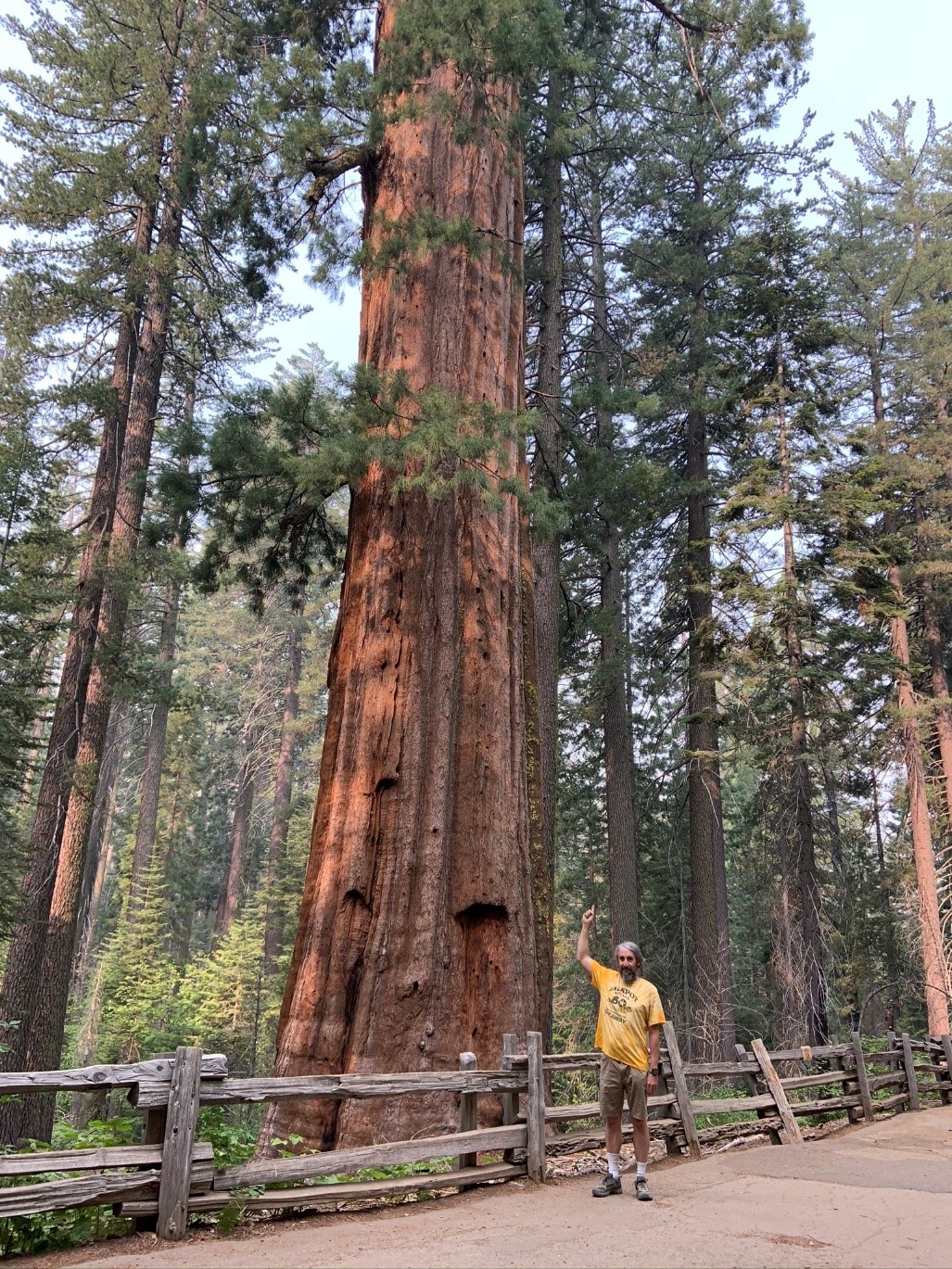 Yosemite has three separate sections of Sequoia trees. This one is in the smallest section, known as the Tuolemne Grove. This picture doesn’t do justice to how thick it is. Signage asks that you need get too close. There is another dead Sequoia in this section with a tunnel through it that I think a small car, like a Mini, could drive through.

One thing that has always confused me is what is the largest types of tree in the world? This gets asked in trivia games sometimes. I have heard both the Sequoia and the Redwood. According to the National Park Service, the Sequoia is the largest in volume and thickness at the base. The Redwood is the tallest.
(Source: https://www.nps.gov/parkhistory/online_books/cook/sec2.htm) 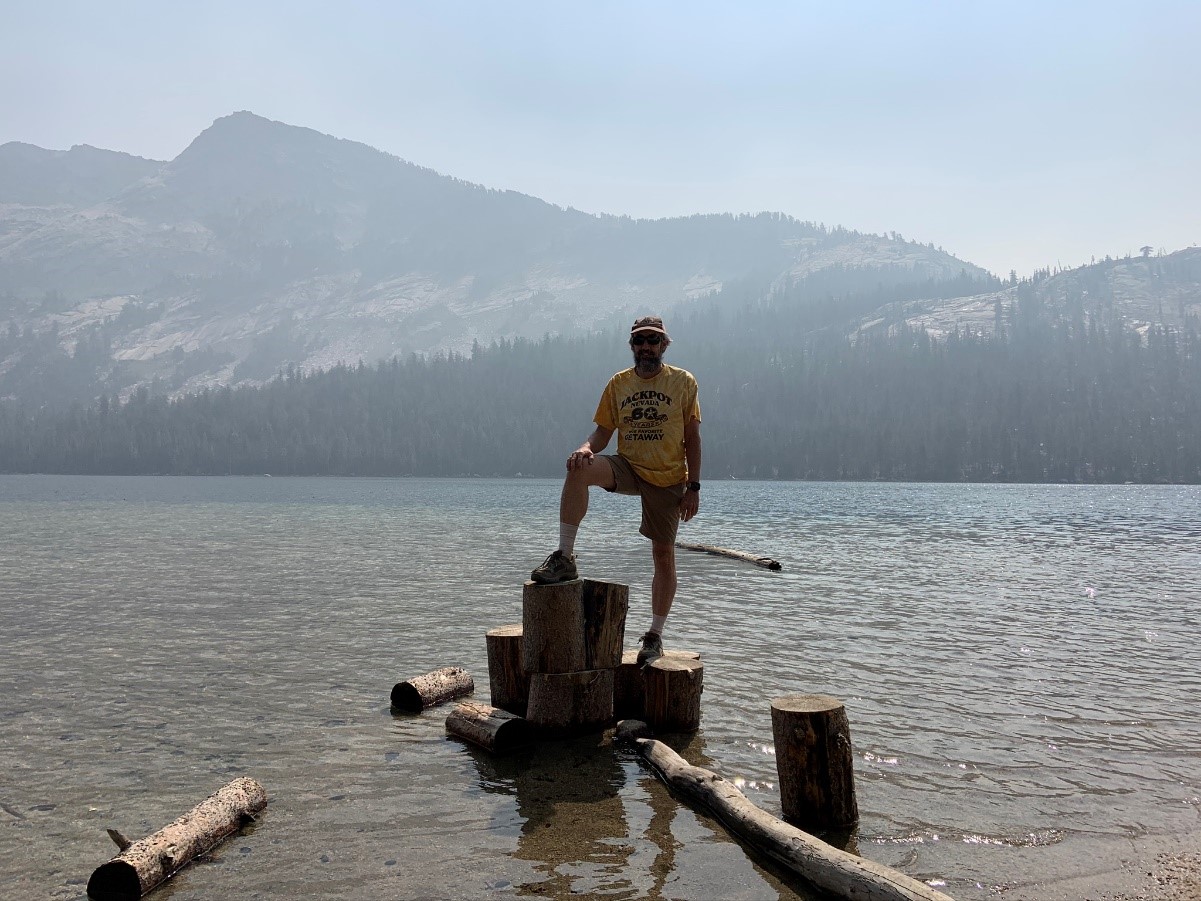 Yosemite has some very scenic lakes. This is Tenaya Lake, which you will pass if you take the Tioga Road entrance from the east. I’ve always wanted to go kayaking on it. 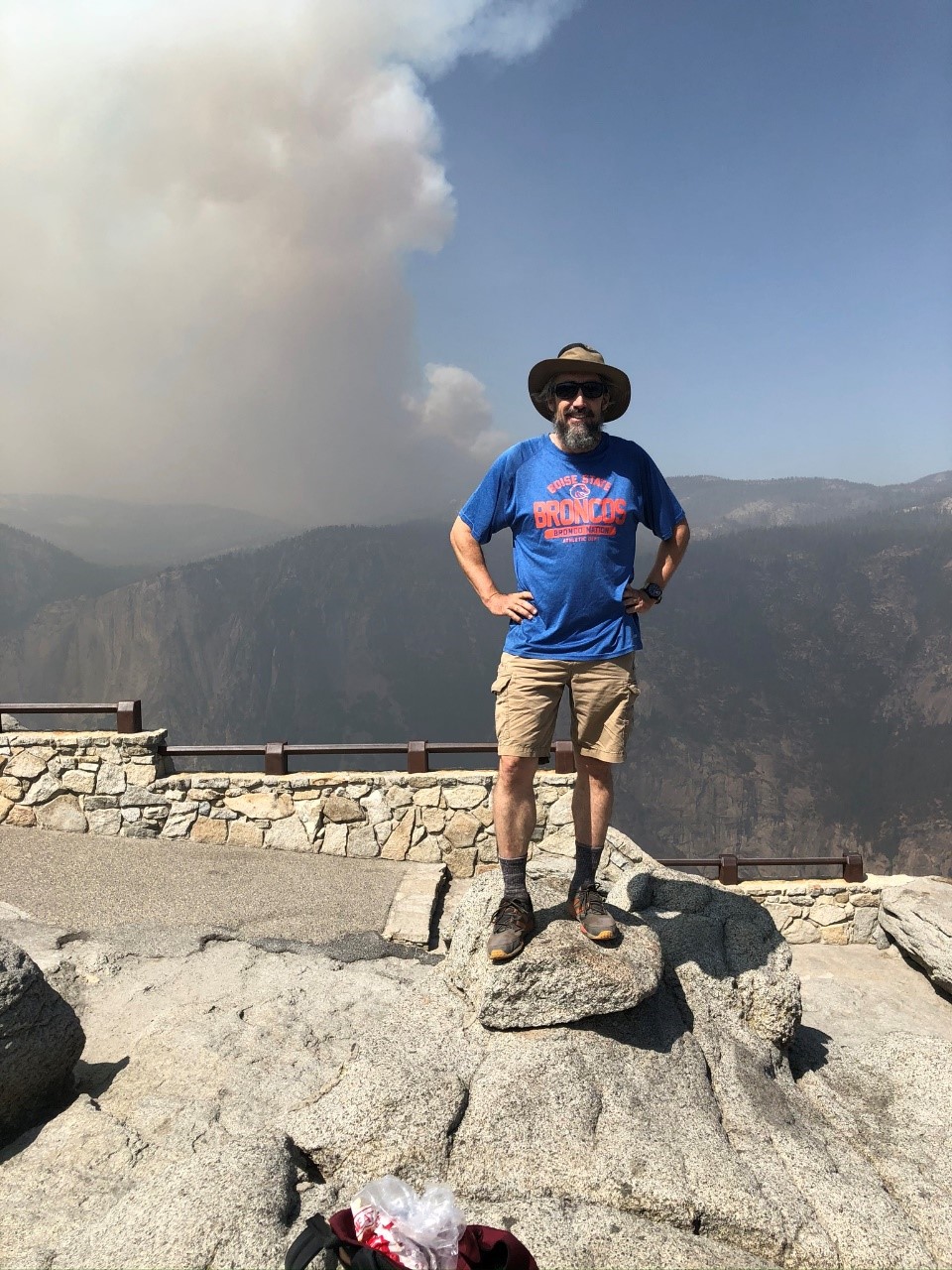 This picture was taken on the first of my three full days in Yosemite, when the quality of the air in lower Yosemite Valley was not so bad. This picture was taken at Glacier Point, looking north at the smoke from forest fires in northern Yosemite and perhaps beyond the border. I highly recommend the “Four Mile Trail” from the valley floor to Glacier Point, which I did. 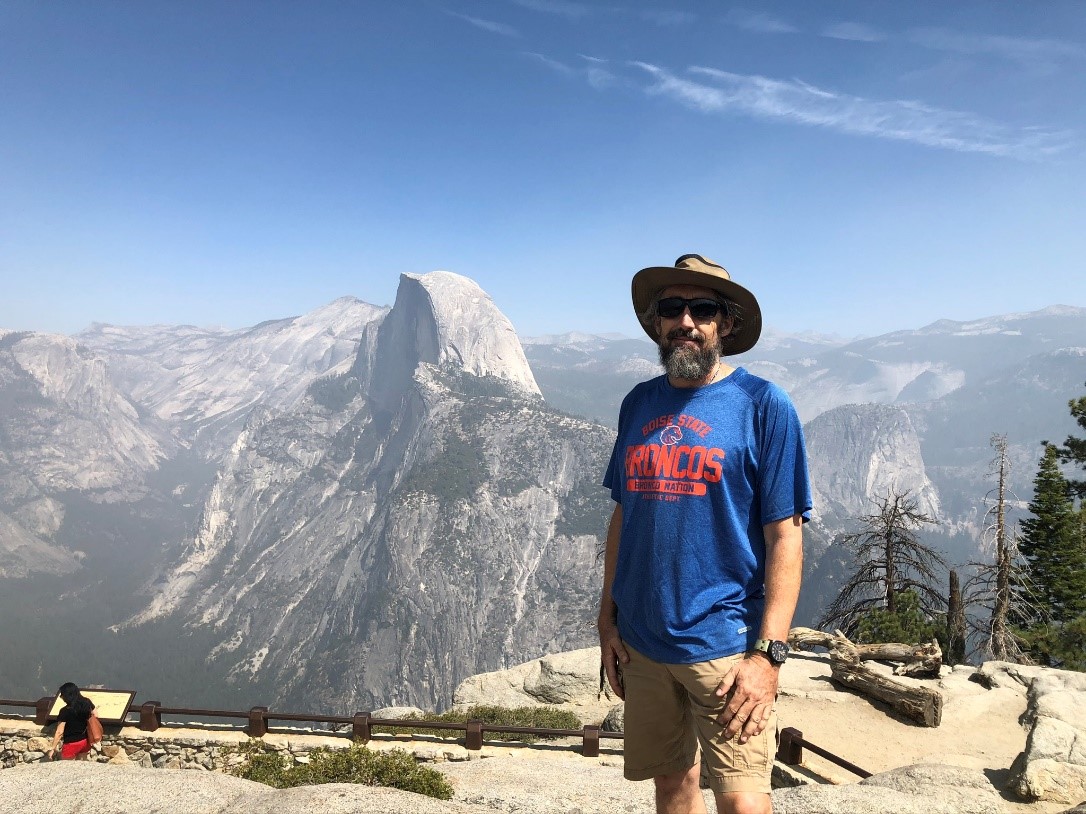 Here is another picture from Glacier Point, looking at Half Dome, which I climbed two days later. I think this was the only time I saw a blue sky the entire trip as it was smokey in the lower valley that day and everywhere was smokey the other two days. 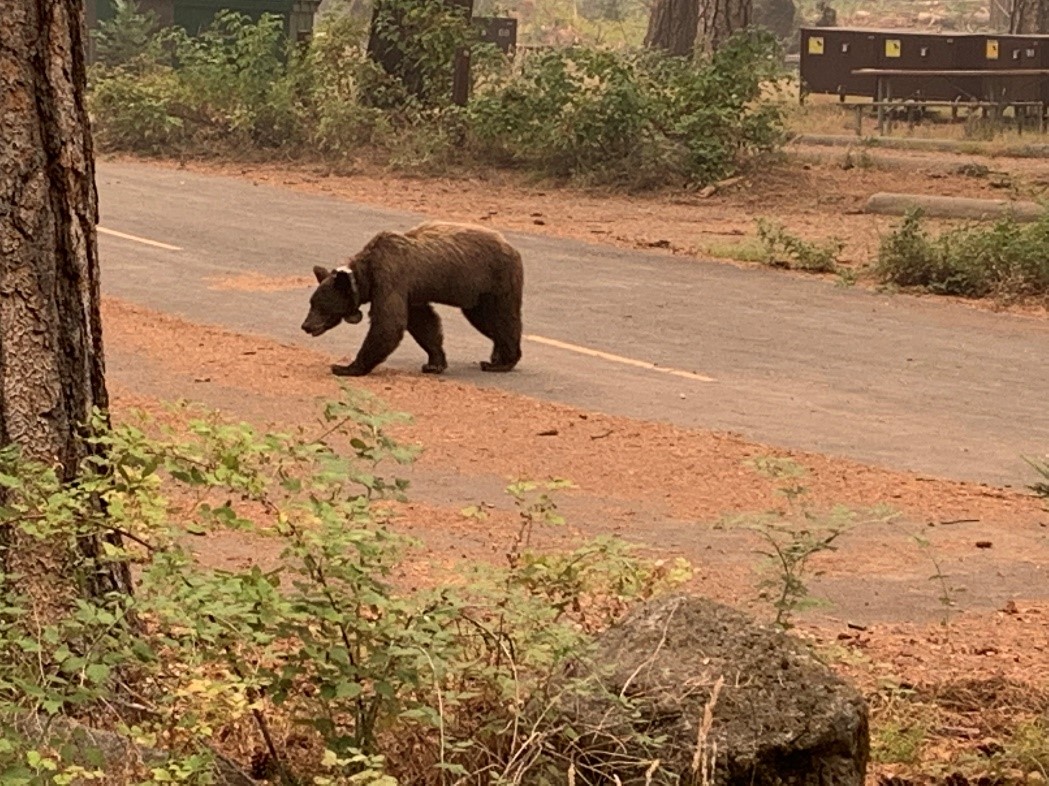 Here is bear #2 I encountered in an empty campground in the lower Yosemite Valley. Like the other one, he didn’t seem to be full sized and fortunately paid no attention to me. 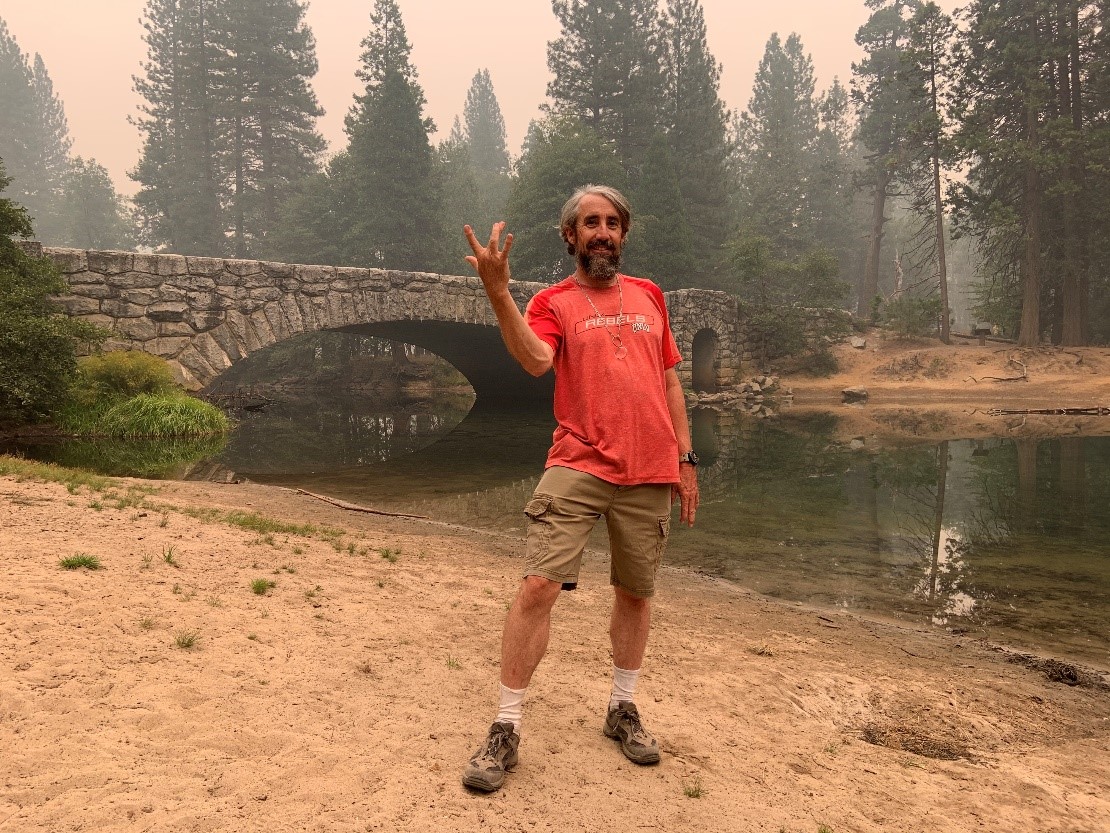 The west is the best! I love the many stone bridges in Yosemite. Normally, there would probably be lots of kids playing the water in spots like this.

These pictures only scratch the surface of Yosemite. If I did a proper travel guide on Yosemite it would turn into a small book. Let me close by saying that Yosemite is one of my favorite places and I highly recommend visiting if you’ve never been. Lodging and camping reservations are extremely difficult to get, so try to plan a visit about a year in advance.