After a lot of Math, I concluded the following:

“In conclusion, I think Biden’s lead in the polls is too insurmountable for a Trump victory. At the end of the day, polls don’t vote but people do and so do judges, so anything could happen. I think it would be generous to give Trump a 25% chance of winning. That would make a fair bet on Biden to be -300, or laying 3 to win 1. That makes laying 2 to 1 on Biden appear a good value. I think the betting public is putting too much emphasis on 2016, which is making Biden a good value.”

I also projected the winner of every state in my forum at Diversity Tomorrow. As of today, going by counted votes so far, I was correct in every state except Georgia, which I projected to Trump. Biden currently leads there by 0.3%. I also miscalled two districts in Nebraska and Maine, which I didn’t have sufficient information to make a prediction.

On election evening, I was watching the results from my mother’s house in California. As a reminder, the betting odds suggested Biden had about a 65% chance of winning on the morning of the election. I think that polls on the East coast started closing at 5:00 PM PST and results began to trickle in.

The early results were good for Trump. It appeared he was doing extremely well in Florida, Pennsylvania, and Michigan. Florida, I projected to Trump, but initial results indicated that Biden was getting lower percentages as Clinton did in 2016. While the commentators said many times that mail-in ballots could be counted before or after the election day votes, according to each state, the county-by-county map of the critical swing states of Pennsylvania, Wisconsin, and Michigan was bright red in those early hours.

Meanwhile, I followed the betting odds at Betfair. It wasn’t just me, but money was pouring in on Trump bets. At approximately 6:20 PM (all times Pacific), the odds had reached 50/50. By 7:15 PM, the odds suggested Biden had only a 24% chance of winning.

Texts were coming into my phone saying things like:

“When will you learn to quit trusting the polls?”

I woke up at 6:00 AM and checked the odds. Biden was up to 71%. This was evidently because Wisconsin, Michigan and Pennsylvania (the Blue Wall states) were reporting more mail-in ballots through the night, which were cutting significantly in Biden’s favor. The margins in all three of those states were too close to call. The only battleground states that could be called or nearly-called were Florida and Ohio, both to Trump. Again, I expected Trump to win those two.

As the day after went on, Biden’s chances increased. By the end of the day, the betting market suggested he had a 90% chance of winning. While the three Blue Wall states were all still “too close to call,” the remaining ballots to be counted were mail-in. The math seemed to suggest Biden had a comfortable advantage, based on how strongly mail-in ballots were cutting his way.

By around noon on Thursday (two days later), the market suggested Biden had a 97% chance of winning. Since then, as accusations and lawsuits of voter fraud were being bandied about, Biden’s chances fell to about 91%, where they remain at the time of this writing (late November 11, 2020). Personally, I don’t see what justifies giving Trump a 9% chance of winning, but what do I know?

By the way, I continue to monitor the betting market with updates to this Wizard of Vegas post. 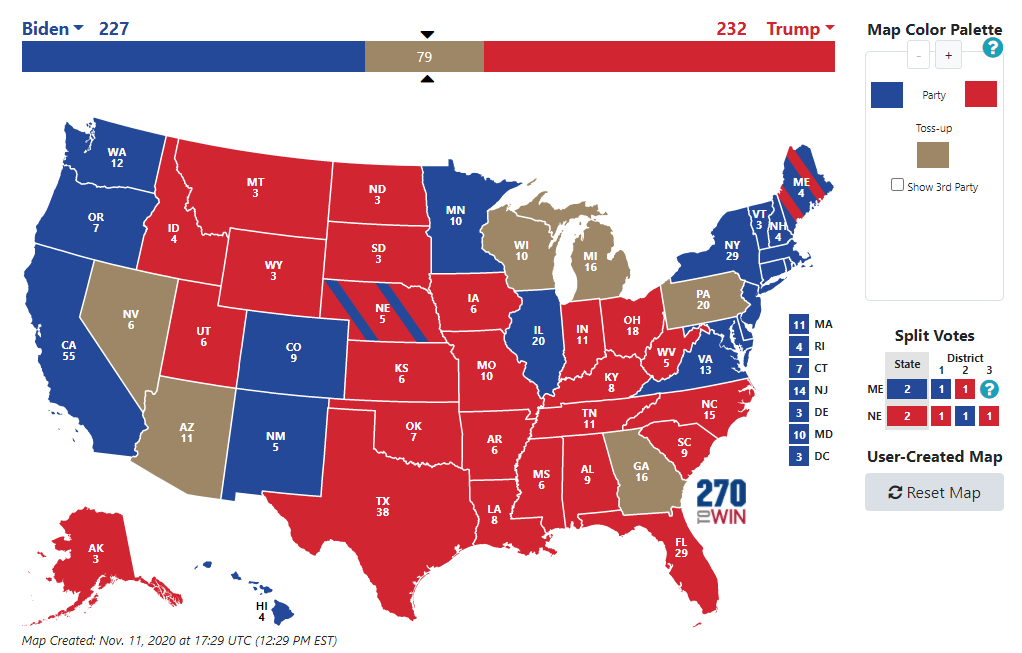 Speaking of election Fraud, a poster at my non-gambling site stated that a comparison of the digits of Biden vote counts showed a 99.999% chance of election fraud. As you know, I love statistics and could not help but research and analyze the evidence. 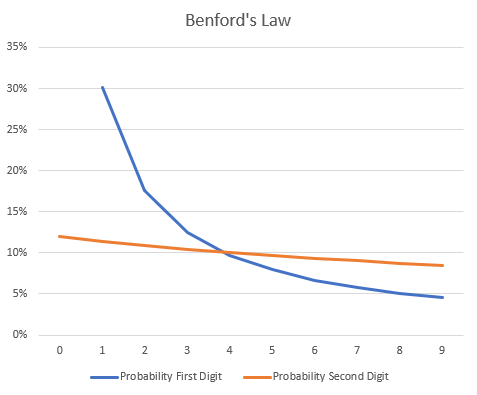 This test is useful for things like bank account balances at a specific bank or fields on an income tax return. In fact, applying Bendford’s Law to a tax return is a good way to catch fraud, as evidenced by non-randomness in falsified numbers.

It is accused that election officials in blue states added just enough Biden votes to their totals to have a comfortable yet believable winning margin. Had they made up the number of Biden votes by hand, a comparison using Benford’s Law might detect this, as human beings are notoriously bad at faking random numbers. Maybe it is a bad example, but ask anyone to pick a random number from 1 to 10. Almost NEVER will anybody pick a number less than 5 and the answer is usually 7, 8, or 9. Had anybody been faking vote totals, Benford’s Law would be an appropriate test, in my opinion, to possibly detect it.

Since this accusation was made, I have analyzed the results from two sources that use Benford’s Law to allege voter fraud. This newsletter has run on long enough, so I will save my analysis until next week. However, if you can’t wait, I present my analysis at Wizard of Vegas in the forum thread titled Benford’s Law and the 2020 Election. If any newsletter reader has his own evidence, please join the forum discussion and I’ll look at that too.

Until next week, may the odds be in your favor.