Today I would like to remember a friend of mine, Hal Bjune, who died on March 23.

I know Hal was born in Norway and immigrated to the United Stated as an adult. He was carpenter by trade. Much like me, in his spare time he enjoyed bike riding and collecting various things, but especially license plates.

It comes a time in the life of all collectors that the end of the tunnel is in sight. We can't take our license plates with us after we die and hundreds of pounds of aluminum and steel can be burdensome before then as well. Hal realized this about five years ago. Gradually, after that, I purchased most of Hal's collection. Much of it was in the form of license plate displays in museums and Department of Motor Vehicles offices around California. Hal was grateful somebody bought them who was happy to let them stay where they were. Through it all a trusted well-known collector by both of us oversaw the sales, to ensure a fair price was paid.

Through Hal's last years, we became good friends. We saw each other once or twice at year at future license plate meets or personal visits to his home near Palm Springs. Sadly, a few years ago, dementia set in. Slow at first, but a time came when Hal could no longer live independently. His last year or so was spent at a facility in Palm Springs for memory impairment. 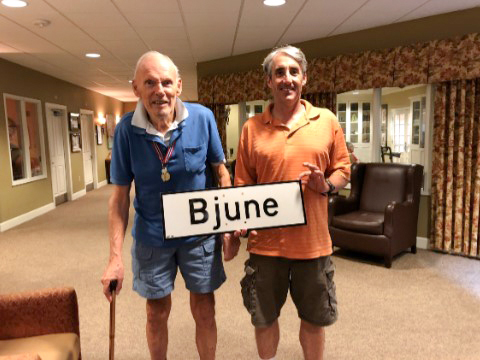 From what I could call, his facility was a nice place. However, about a month ago he could no longer speak and mostly quit eating. He mostly slept all day. Unfortunately, this happened at a time when his elderly friends were either afraid for their lives to leave their homes, for obvious reasons. I am not sure his facility is even letting visitors through the doors anyway -- and I wouldn't blame them. His last month or so, I don't think a single friend or family member was able to visit him.

On March 23, he died. That day the world lost a very happy, gregarious, honest, and joyful man.