You may recall part 1 of my kayak adventure was the topic of the March 25, 2021 newsletter . As you may remember, that trip was cut short due to high winds. So, last Friday, six friends and I set about to finish it.

Early on Friday morning were dropped off at the Temple Bar Marina in Arizona by Bali with the Las Vegas Kayak Club who I highly recommend for any kayaking or standup paddleboarding trips around Las Vegas. It was our goal to travel 37 miles to the Las Vegas marina over the next three days. 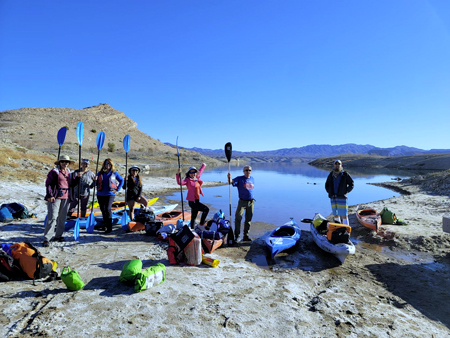 Here we are getting ready to embark at the Temple Bar marina. Comparisons to Gilligan’s Island might be made, except we were on a three-day tour. Note how nice and glassy flat the water was. The temperature was in the low 70’s – perfect conditions for a kayak trip!

Day 1 was fantastic. I would say the only slight challenge was the water level was significantly lower than that when my map and GPS were made, so sometimes we encountered new islands that were previously underwater or places where multiple islands became one or new peninsulas appeared. Sometimes it was a little confusing. Notable events were a burro grazing by the side of the lake and finding three coyote melons . 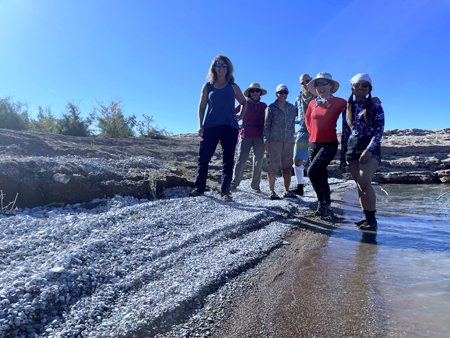 Here we are (except me as the photographer) at an interesting white rock beach. Our trip was during the Olympics. We celebrated with a rock skipping contest, which I’m proud to say I won, representing Germany. 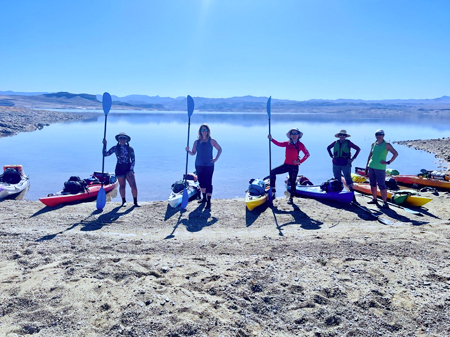 The picture above shows a nice beach where we made camp the first night. Note how glassy smooth the water was. It was a huge beach with plenty of room to spread out. In this quiet part of the lake there was no sign of civilization or other people anywhere, except some planes far in the sky, probably headed to Las Vegas. 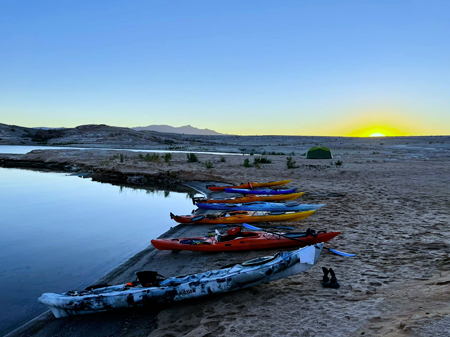 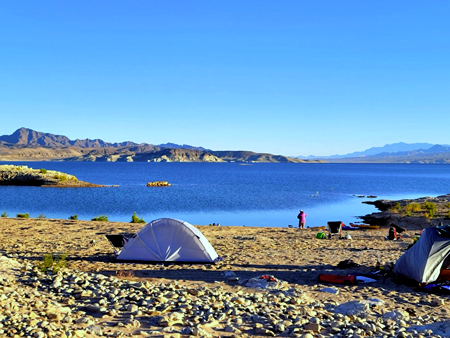 The two pictures above show the same beach at sunrise the following morning.

The main event of day two was crossing through a channel between two large sections of Lake Mead. Although there was still almost no wind, the channel seemed to create a wind tunnel effect with some wind. In this part, it felt more like the Colorado River than Lake Mead and we could feel the current moving us forward. 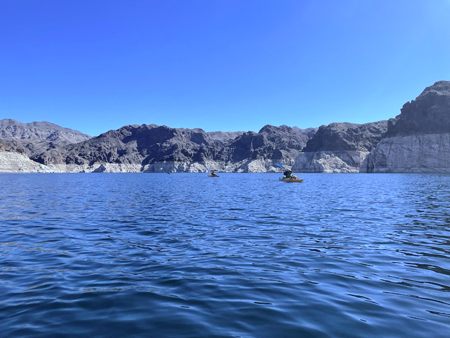 The picture above was taken inside the channel. You can see the “bathtub ring” along the sides, marking lost water the lake used to hold. 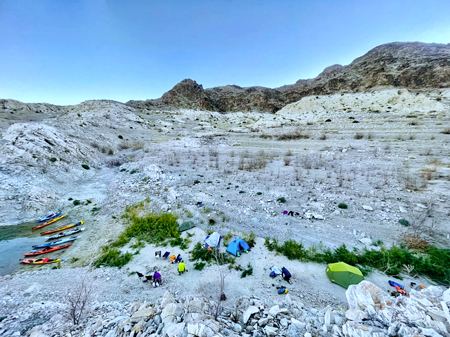 The next picture shows our campsite the second night, taken the following morning. Up the wash where we were located was the remnants of a beaver dam so we had an unlimited supply of firewood conveniently gnawed into pieces resembling spears. This part of the lake was closer to Las Vegas and thus somewhat noisy with boaters, but this cove was nice and quiet and offered shade in the hot afternoon. The main excitement was a lizard discovered in one of the lady’s tents. 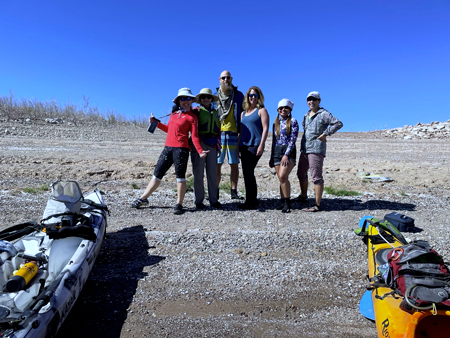 The picture above I believe was taken on our first rest break on day three. We made good time and got to near the Las Vegas marina three hours before our scheduled pick-up time at 3:30.

Rather than wait in the marina parking lot, we found a beach on an island about a half-hour paddle from the marina and relaxed, swam and drank the last of our beer and wine. During this time, we felt the first wind of the trip. The last paddle to the marina was a little windy. Waiting in the parking lot for our ride, the wind suddenly picked up to a point people’s hats were blowing off. We felt very lucky/blessed that the wind held off until the trip was over.

Overall, the trip was a huge success! We are already talking about our next trip to explore the Overton Arm of Lake Mead in the fall and perhaps circumnavigating Lake Tahoe in 2023.

In closing, here are some miscellaneous pictures of me taking during the trip. 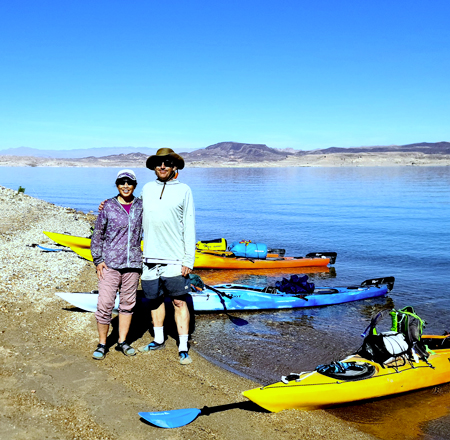 Patti and I – The skipper and first mate of the trip. 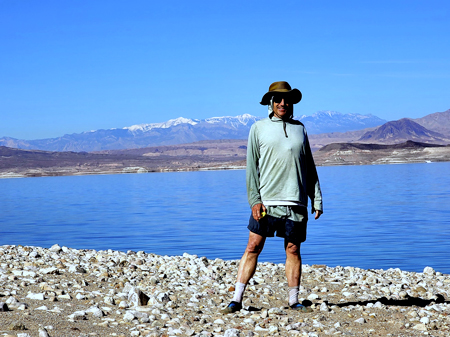 That is Mount Charleston in the background, which I have climbed about 20 times. 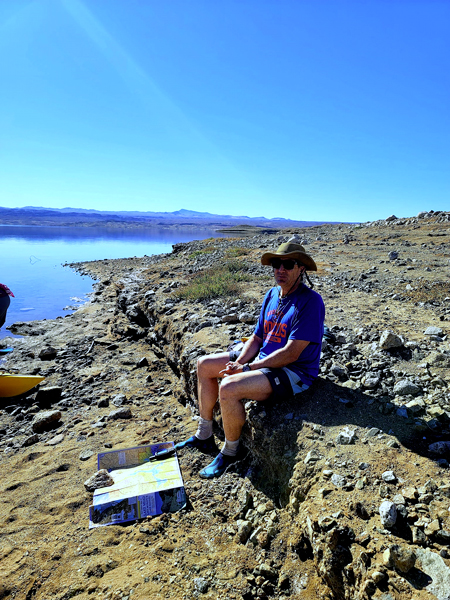 Taking a break, where I was often seen studying my map and GPS. 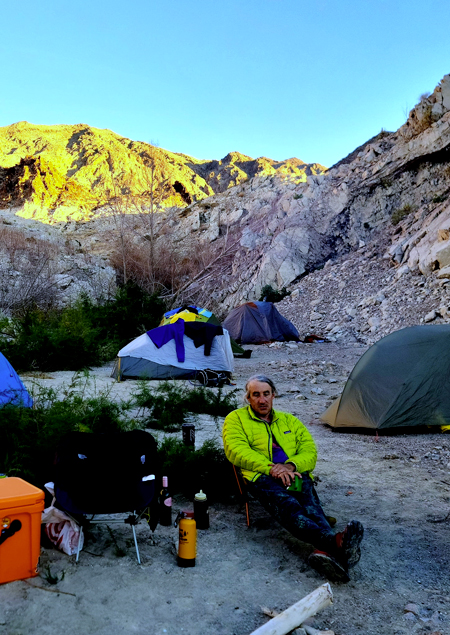 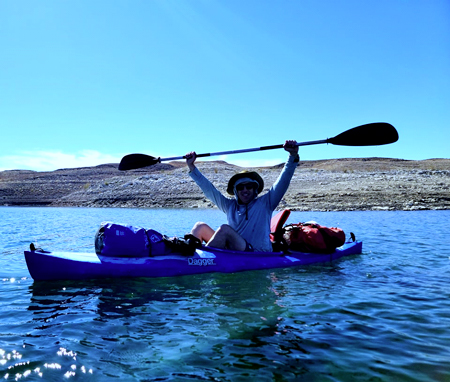 Here is a picture of me on the water in The Dagger, my own kayak.

With this trip complete, I can proudly say I’ve paddled from the South Cove launch ramp at the east end of Lake Mead all the way to Bullhead City. Of course, I had to skip the part near the Hoover Dam. Overall, a distance of about 120 miles. I must say I love kayaking and think my next decade will see a lot more of it.