You may recall my January 22, 2021 newsletter was about my three-day 50-mile kayak trip from Willow Beach to Boulder City. We had such a good time we planned another adventure to do most of Lake Mead over four days. We left on Friday, March 19. Here is a map of our planned starting and ending points. 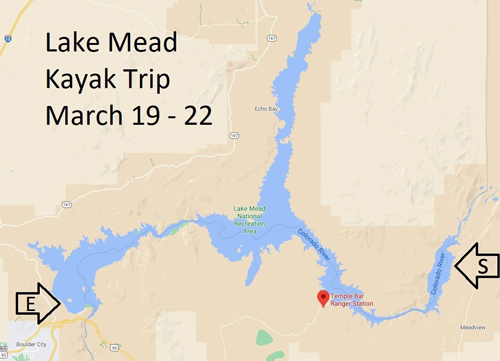 This time the group was the same four from the previous trip, Patti, Leah, John, and I, plus our boot camp leader, Rick. Here is a picture of us about to embark at South Cove. 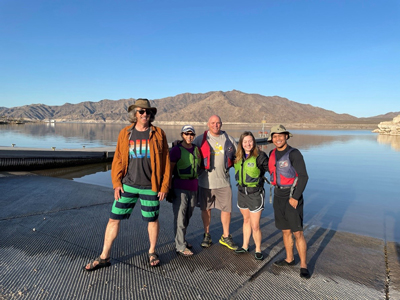 This first day was very pleasant. The high temperature was in the low 70’s with mild wind. 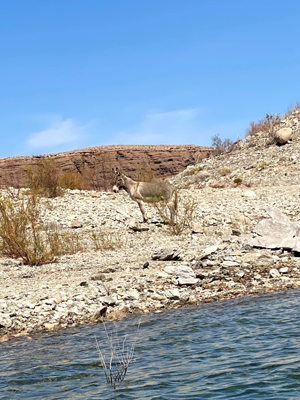 There were some burro sightings along the way, like this one. 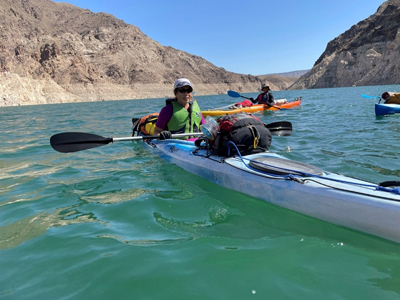 Here is a typical picture on the water. I have many like it. Do you notice what looks like a white bathtub ring along the side of the hills? That marks a historical high water level. The southwestern states have been consistently using more water than flows into Lake Mead for decades, causing the water level to drop significantly. 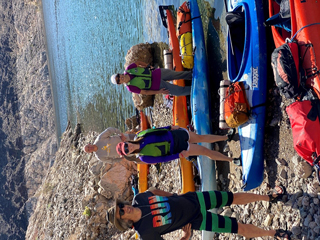 Through the narrow Virgin Channel there were not many convenient places to make a break. This little spot was about the best we could do. 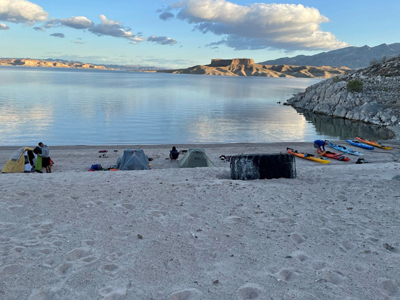 After 14 or 15 miles on the water we made camp at this lovely beach. The only flaw was that abandoned tire. This picture was taken the following morning. 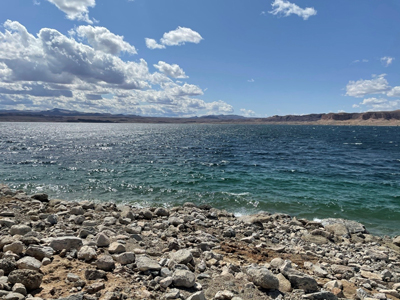 The next day was predicted to be the windiest of the trip. Early in the morning there was hardly a breeze. Wishing to take advantage of calm winds while he could, Rick set out about half an hour earlier than the rest of the group. The plan was he would wait for us somewhere on the Nevada side before crossing over the widest section of the lake.

When the rest of the group, including me, left the weather was fine. However, it got bad quickly. Here is the wind speed out of the Temple Bar marina that day by time:

You may recall from my January trip it got quite windy as well. However, that time the wind was at our backs. This time, the wind was coming out of the southwest and we were traveling northwest. I was not used to kayaking in high wind at an angle into the wind. The waves were pushing me towards the Arizona side of the river when we were supposed to meet Rick on the Nevada side. In other words, the wind seemed to want me to be at a 90-degree angle to the waves. This is bad because in that position the kayaker has little control, the waves crash over the side, and the kayak takes on water. That can lead to the kayak capsizing and that can lead to drowning if the kayaker can’t get back in the kayak or swim to shore. 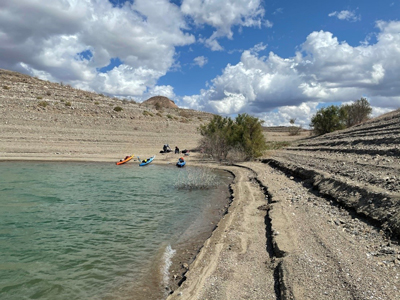 At around 11:30, having not seen a sign of Rick, we made the difficult call to go into a cove and resume the journey when it was safer. It was not an easy decision, but it was what I recommended in the interest of safety. Nobody else disagreed. The picture above shows where we waited in an area called the Haystacks.

What followed was four hours of sitting there and waiting out the weather. Patti had a GPS device called a Garmin inReach Mini. It has various features, but we could only get a very general weather report that said that day and the next day were projected to be “windy.” The device does allow for sending out an SOS signal, but I felt the situation was not dire enough to press that button. Everyone had enough food for at least three more days, appropriate clothing, and a whole lake full of water to drink. 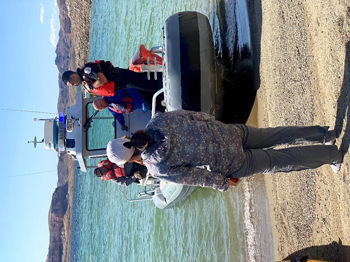 At about 3:30 a patrol board came zipping down the lake in the direction we came from. They evidently saw our kayaks and me waving my arms, turned left and headed towards us. On it was Rick, his kayak, and two park rangers.

To make a long story short, Rick was up the lake, as I predicted, where he had been looking for us for hours. He was very worried about the choppy conditions and recalled Patti capsizing the previous trip. He had some cell service and after about 40 attempts at calling 911, finally made it through. As I understand it, they transferred him to the Park Service and he asked them for a rescue. It would take them five or six hours to find Rick, which they did from the GPS coordinates he made the call from.

Rick said they were taking him to the Temple Bar Marina, which we had passed by earlier that day. On the way he spotted our kayaks and asked them to check if they were ours. 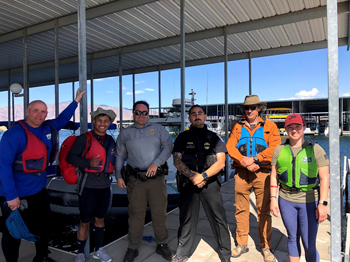 It was a short 15-minute drive to the Marina in their very fast boat. There we were introduced to a very kind man named Dale who took some of us to go back and get the kayaks and the rest of our gear. I fortunately was able to reach Bali, our ride, from the Temple Bar Resort who kindly let me use their phone. He had just finished a tour, but kindly came out to pick us up.

This was the first time I had been rescued since I got lost in the Sierra Nevada Mountains as a kid. I am not sure this should count as a rescue for me, since I never asked to be rescued. One could argue about Rick’s decision to call 911. It’s not what I would have done in his shoes. You may recall we chose not to send out an SOS signal. However, Rick’s heart was in the right place and I can’t fault that. In the end, what happened, happened.

As we were being driving back to the Hoover Dam Lodge, where our cars were parked, it was discussed resuming our adventure later in the year. I hope to do so in September or October, but we have plenty of time to decide. That is why I put the “part 1” in the title of this newsletter. Hopefully there will be a successful sequel soon.