The object of Smarty Pants is to deduce the word of the day, which I will call the solution. Solution words can be any valid English word in the games list. Proper nouns and plurals are usually not valid words. A list of the allowed six-letter words can be found here.

For each of the positions in the player's guess, the game will award a peg, as follows:

Let's look at an example from the July 26 game of Smarty Pants 5. 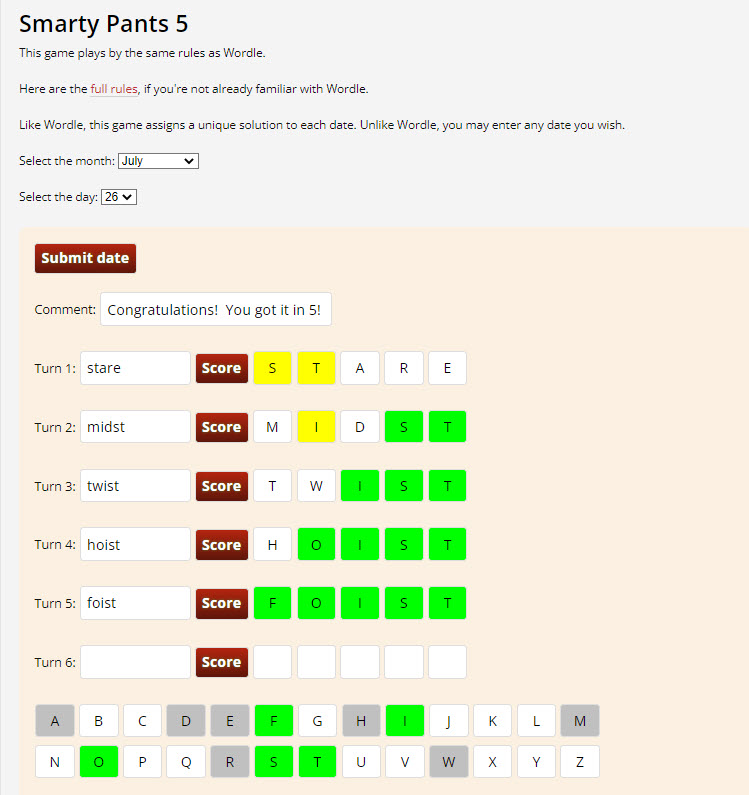 My first turn I guessed STARE, as I always do. My analysis shows this to be the best starting word, although there is much debate about this. I find most people prefer ADIEU. To them, I suggest you say adieu to ADIEU. The score of my first turn was a yellow for the S and T. That tells me the solution has an S and a T, but not in the positions I put them.

My second guess was MIDST. I know a lot of words end in ST. Then I chose MIDST specifically because the M, I, and D were still in play. My score to that turn told me I was right about the S and T and the end. I also got a yellow for the I.

My third guess was TWIST. I could easily narrow down the "I" could be in the first or third position only. Lots of words end in IST, so I then had to think of any two letters for the first two positions that made a valid word. TWIST was the first that came to mind. Note that the yellow for T in the first turn did not preclude the possibility of two T's in the solution. The score told me I was right about the I in the third position, but wrong about both another T and the W.

My fourth guess was HOIST. This was simply the first word I thought of that ended in IST where the first two letters were not ruled out yet. The score told me I was right about the O. Just one more letter to figure out.

My fifth guess was FOIST, which, as far as I know, is the only possible solution. I was right.

If you are not opposed to a little cheating, the Farlex Free Dictionary is helpful at providing at list of words and begin or end with whatever letters you indicate. For example, the link will take you to words ending in OIST.