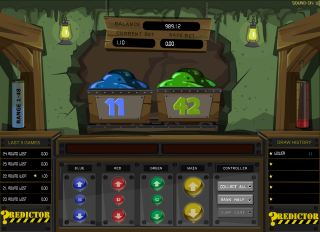 Predictor is one of several games invented by BetSoft, a provider of software for Internet casinos. It is a simple numbers game where the player predicts whether the next number will be higher or lower than the previous number and/or the color of the next number. It bears a strong resemblance to the Playtech game Megaball, but Predictor is played Card Sharks style, while Megaball is more like keno.

You can see in the table above that the expected odds are always close to 96%. Any variation is due to rounding of the offered odds.

Much like roulette, just do whatever you wish. The odds are the same no matter what you do, other than the possibility to gain a fraction of a penny in the rounding.