Niu Niu is a popular gambling game in south-eastern China and Combodia. There are also variations of it in Malaysia, Vietnam, and probably other places in southeast Asia. It can be played socially, in the casinos of Cambodia, and online casinos catering to Asian players.

The word "niu" in Chinese can be translated to cow, bull, or ox, so it is known in English as cow cow, bull bull, and ox ox. The rules are a bit difficult to explain, but playing the game is simple. If you are familiar with the game, I welcome your comments about the game and this page in my forum at Wizard of Vegas.

To avoid confusion, I will capitalize the names of bets and use lower case when referring those actually playing the game.

Following are the rules as dealt in the land casinos in Cambodia, as I understand them. I will follow those rules by how the game is played on online casinos.

* I have an unconfirmed report that some casinos in Cambodia do not charge a commission on the Equal bet. This would result in a bet with zero house edge.

It should be emphasized that the player can lose up to three times his "bet" if wagering on the Double. It is my understanding that the player must actually place on the table three times what his intended "bet" is, to show he can cover a worst-case-scenario loss.

The way the game seems to be dealt online is a bit more complicated. Here are the rule differences, compared to the Cambodia rules, as I understand it. 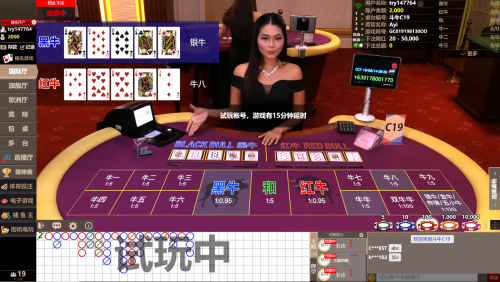 The following table shows my analysis of the Equal bet with one deck and a 5% commission on wins. The lower right cell shows a house edge of 2.50%.

I have heard some casinos in Cambodia offer the Equal bet with no commission. I find this a bit difficult to believe. However, if true, then it would be a truly fair bet with no house edge.

The following table shows my analysis of the Double bet with one deck, a 5% commission on wins, and the Ultimate Niu Niu rule. Although I hear single-deck games generally don't follow the Ultimate Niu Niu rule, I will include this table anyway, in case you find such a game. The lower right cell shows a house edge of 4.03%, which is based on the ratio of the expected loss to the smallest possible loss.

Next, here is a table for the Double bet without the Ultimate Niu Niu rule. In this case, five face cards would not necessarily outrank any other Niu Niu. The probability of an Ultimate Niu Niu with one deck is 1 in 3,282, so there is almost no difference in the odds. The reduction in house edge is 0.003%, as measured by the ratio of the expected loss to the amount lost for a No Niu or a Small Niu.

Next, I hear that some casinos in Cambodia only charge the 5% commission on wins of 2 to 1 or more. The following table shows how that would effect things.

The following table shows my analysis of the Equal bet with a 5% commission and six decks. The lower right cell shows a house edge of 2.48%.

As mentioned in the one-deck section, if you find the Equal bet with no commission and no other rule changes, the house edge would be exactly zero.

The following table shows my analysis of the Double bet with the Ultimate Niu Niu rule, based on six decks. The lower right cell shows a house edge of 3.99%, which is based on the ratio of the expected loss to the smallest possible loss.

Next here is a table for the Double bet without a special category for an Ultimate Niu Niu.

Finally, I am aware of some major rule variants, which I won't analyze on this page, but they are worth mentioning.

I would like to thank andrew888 for his help understanding the rules of Niu Niu as played in Cambodia.