Crown & Anchor is a simple dice game found at Internet casinos using Evoplay Entertainment software. The player bets on one of six sides of the dice, three dice are rolled, and the player wins according to how many land on the chosen side. 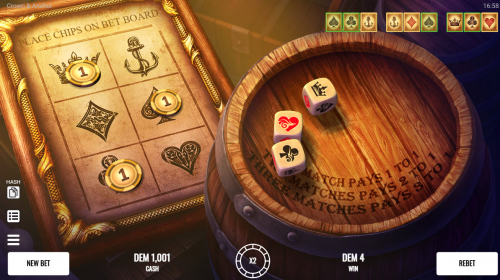 The rules are the same as the single-face bets in sic bo, except the dice have pictures instead of numbers. If you're not familiar with sic bo, here are the Crown and Anchor rules.

The following table shows the number of combinations for each event of every bet, the probability of winning, and contribution to the return. The lower right cell shows a house edge of 7.87%.