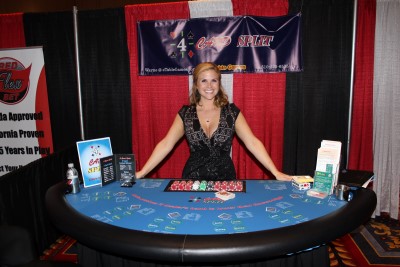 The first time I saw 4 Card Split was at the 2014 Raving Table Games show. The second time was a year later at the 2015 Cutting Edge Table Games show, though there were some rule changes. Finally, I had the pleasure to see it in a real casino at the Suncoast in Las Vegas in March 2016.

The game is hard to summarize briefly. If forced to try, it is like a cross between pai gow poker and Three Card Poker. Add to that an option to raise on both player hands and a mandatory side bet and you've got quite a creative new game idea. The game is a bit hard to comprehend at first, but once you get the hang of it I think you will find it interesting, challenging, and entertaining.

Here are the rules to 4 Card Split. They are a bit hard to explain, so pay attention.

The following pay table is for winning Ante bets. All hands are based on three cards. All wins are on a "to one" basis.

*: Hands less than a flush do not count as Instant Winners.

The following pay table is for the 4 Card Blind bet. All hands are based on four cards. All wins are on a "to one" basis.

First, you want to bet as little as possible on the 4 Card Split bet. So, bet the same on that as any one Ante bet. Don't let the dealer tempt you into putting more on it.

Next, I'm afraid that you're on your own when it comes to strategy on how to split your four cards. Nobody, that I know of, has analyzed a strategy for doing so yet.

Finally, here is a strategy for the raise/fold decision on each individual hand. It is based on a combination of the rack card strategy and a clarification on how to play three-card hands from the game owner.

A flush or higher is an automatic winner and requires no decision. With any other three-card hand, follow the one-card strategy below.

Raise with any of the following, otherwise fold.

Raise with a jack or higher that beats the dealer's up card, otherwise fold.

The following analysis is by Steven How of Discount Gambling fame. The first table shows the possible outcomes of the Ante and Play bets. The lower right cell shows that each Ante bet can expect to win 0.168371 units.

The next table shows the analysis of the 4 Card Blind bet. The lower right cell shows an expected loss of 0.347268 units.

Overall, this is one of the best bets you're likely to find in the casino — as long as you follow optimal player strategy.

Here is my interview of my favorite dealer in Vegas, Angela Wyman, from the 2014 Raving Table Game show on how to play 4 Card Split. Please note the rules were a little different at the time.


Here is my update from the 2015 Cutting Edge Table Game show on some rule changes since the 2014 show.