31 Classic is a new table game that had its first placement at the Muckleshoot Casino in Washington. It will debut at the Sunset Station in Las Vegas on December 14, 2017. It is difficult to compare to any existing games, other than a similar game by the same inventor Money$uit 31. The object of this game is to combine the point values of up to three suited cards to get a hand totaling 17 points or higher. There is no dealer hand to beat, only your own cards matter. The game features the card values of blackjack and a raise/fold decision as seen in many poker-based games.

The rules may look a bit intimidating at first, but the game really is simple to understand and play after a few hands. The strategy is fairly easy, and the odds are competitive compared to other new casino games.

Following are the rules for 31 Classic.

Following is the pay table for the Ante and Play bets. All wins are on a "to one" basis.

Following is the pay table for the Natural 31 Bonus bet. All wins are on a "to one" basis. 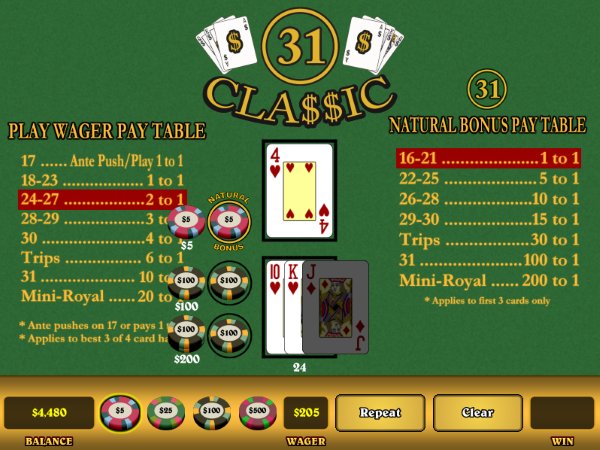 In the hand above, I had 20 points in hearts after my first three cards, so I made the Play bet. The Draw card was the four of hearts, for a total of 24 points in hearts. With 24 total points, my Ante paid even money, and the play bet paid 2 to 1. The Natural 31 Bonus is paid based on my original three cards, which totaled 20 points, which pays 1 to 1.

Click the game image in the example above to enjoy 31 Classic for yourself. One click and you're in.

Play if you have any of the following:

The following tables show the number of combinations, probability, and contribution to the return for the Natural 31 Bonus bet. The lower right cell shows a house edge of 6.08%.