3 Card Blitz is difficult to compare to anything already on the casino floor, except maybe Money Suit 31. It follows a familiar fold or raise structure from games like Three Card Poker and a Blind bet from games like Ultimate Texas Hold 'Em. Briefly, the goal is to have total points in any one suit more than the corresponding such total in the dealer's hand.

I first heard of 3 Card Blitz in January 2019, when somebody mentioned it in my forum, saying it had a placement at Foxwoods. Later, in May 2019, I heard it had another placement at the SLS in Las Vegas. 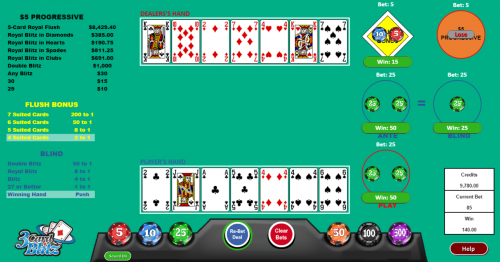 In the image above I had 26 points in clubs (11+10+5). A maximum of three cards can be used, thus the two of clubs didn't help me. The dealer's best hand was 19 points in diamonds. Thus, I won. The Ante and Play paid even money. The Blind was one point short of the 27 needed to pay anything, so that pushed. For the four clubs, the Flush Bonus paid 2 to 1. Finally, at least 29 points are needed to win the progressive, so that lost.

Following is my Wizard's basic strategy for 3 Card Blitz. To use it, I'll have to introduce the term of a penalty point. It is a borderline case to raise or fold with 19 points. With 19 points, the player should count the number of points in the other three suits in his hand. It it good for the player if these are high cards, because it will leave more low cards for the dealer. I call this total points in the other three suits not played in the player's hand "penalty points."

The following table shows the result of a simulation based on the basic strategy above. The return is the product of the probability and pays columns.

If the player plays a simple strategy of raising with any 19 points or more, then the house edge increases to 3.915% and the Element of Risk to 1.395% (it is a coincidence both have the name numerals, but in a different order).

The following table shows my analysis of the Flush Bonus bet. The lower right cell shows a house edge of 4.49%.