Normally I'm not one who enjoys tooting my own horn. However, in this blog entry it just can't be helped, so I'm going to throw all modesty aside and blast that trumpet. I'm proud to announce that I am the winner of the World's Greatest Blackjack Player tournament at the 2011 Blackjack Ball.

For those of you who have never heard of the Blackjack Ball, it is an annual gathering of the world's best blackjack players and those who have contributed to the study of the game. For years it has been hosted by gambling writer Max Rubin at a secret location in Las Vegas. The tab is paid for by the Barona casino in San Diego, which I think is very sporting of them. It is a prestigious thing just to get invited. For more information, I highly recommend the article The Blackjack Ball by Michael Konik, which appeared in the Sep/Oct 1999 issue of Cigar Aficionado magazine.

The evening starts with a cocktail reception, dinner, and then voting on an inductee into the Blackjack Hall of Fame. The winner is a little-known, but one of the best blackjack players ever, Zeljko Ranogajec. Next came the tournament for the Grosjean Cup for the 2011 World's Greatest Blackjack Player. It starts with a Calcutta, in which everybody can bet on who will win. No, I didn't bet on myself, unfortunately.

As always, the first step is to narrow down a room of about 100 outstanding blackjack players to just six. This is done with a 21-question test on knowledge of blackjack and casinos. Some questions were serious, some trivial. A good question, that I'm embarrassed to say I missed was, "Which Clark County casino has the most 3-2 single-deck blackjack games?" I'll post the answer at the bottom. Another one, which I did get correct, was in what city is the Chumash casino? Having lived in Santa Barbara for five years made this one easy — Santa Ynez, which is a small town inland from Santa Barbara, close to Michael Jackson's Neverland Ranch.

My score on the test was 11. I didn't think that was a score good enough to qualify, but I tied with six other people with 11 as the highest score. One had to be eliminated. This was done by taking turns naming any Harrah's (I still have trouble calling them Caesars Entertainment) property in the country. As soon as somebody gave a wrong answer, or a repeat, he or she was eliminated. We went through all the Vegas properties first. After a about two or three more rounds somebody else got one wrong, and I advanced to the table.

However, the table had five spots only, and six people advanced. A game of darts was used to eliminate one person. Just that morning I had been shooting a BB gun with my son, so I was primed and ready! I'm proud to say that not only didn't I lose, but I won, giving me the first-base position at the table, and some positional advantage, although I'm not sure if it helped.

Next came various games of blackjack skill. Some serious and some fun. These included: chip shuffling, cut-card placement estimation, a Blackjack Switch type game, and a charades-type game of signaling a chosen teammate something a card counter might need to convey with hand signals. My instruction was "This game stinks, let's leave." At various points in the game players were eliminated either for having the fewest chips, or by Survivor style choice of the chip leader. I did well at the chip shuffling and cut-card estimation. Who would have ever thought shuffling chips would serve me any purpose?

To try to make a long story short (I know, too late), it came down to three of us: Anthony Curtis, a guy I didn't know, and myself. Anthony mentioned his place at his own lasvegasadvisor.com, so I don't think he will mind that I mention this. I was chip leader and got to eliminate somebody. I knew the final competition would be who could count down a deck of cards fastest. I'm by no means the fastest counter, so my expectations were not high. However, the choice was whom to bring with me. I know that Anthony Curtis used to be a very active card counter, so I would probably be in trouble going against him. As I said, the other guy I just didn't know. Anthony is the publisher of my book and a good pal for years. I chose him as my opponent because friendship means a lot to me, and if I didn't win, I would have liked to see Anthony win the cup.

So our great host Max Rubin gave each of us a single deck of cards. He drew four cards face down off the top of each. Then he said the first person to count his deck, slap the table, and correctly indicate the count of his deck, as evidenced by the four remaining cards, would win. I have not practiced counting down a practice deck in about 20 years, so I was not feeling very confident. However, back at UCSB in the eighties, I taught myself counting out of Revere's Playing Blackjack as a Business. Between classes I counted down a deck for at least an hour a day until I got my speed to about the point where my hands just could not turn cards over much faster. Fortunately, this training stuck with me somewhat 25 years later (seems like yesterday).

After explaining the rules, Max had us pick up our decks and wait for the "go." After Max gave the word I did my best to turn over cards two at a time while keeping a running count in my head, just as I did in college many years ago. However, never have I been so nervous doing it. Fortunately, my deck never went very far from neutral. I think it is a bit harder when the count has extreme swings, which fortunately was not the case.

After what must have seemed like a very slow performance from the audience, I put down the cards, slapped the table, and said "zero!" That means that my deck had balanced in terms of high and low cards, meaning the four remaining cards would too. Max turned over three of them, two small cards and one large. Before turning over the last card he said, "If this is a ten or ace, Shack wins." 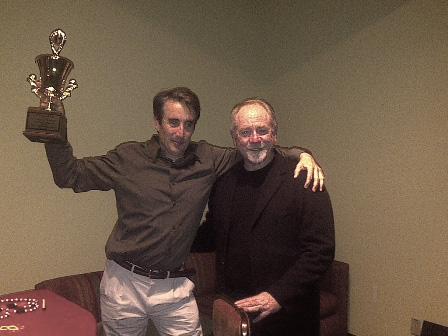 It was a ten! I think the queen of diamonds. I couldn't believe it! Max handed me the trophy and I proudly accepted the applause from the audience. This was truly a night to remember. I fully admit there were plenty of other people in the room with greater money-making skill at blackjack than myself. However, when you mix in general blackjack and gambling knowledge, I think I'm no slouch. I also fully admit there was a lot of luck too, and I got more than my fair share of it that evening.

After I wrote about this in my Wizard of Vegas blog, my father wrote, "Now that you are officially the world's greatest blackjack player, will you be banned from playing everywhere?" Maybe I'm the first winner foolish enough to openly broadcast it, using his real name. However, I fly so high above the radar already, what more harm can it do? Thanks Max for hosting the tournament and to the Barona for paying for it.

Answer to trivia question: The Riverside in Laughlin.