In part 1 of my speeding ticket story, I told how I intended to use a local attorney to try to plea down my punishment. I had also hoped to answer the question about why the system would even take a plea on a cut and dry case such as mine. On January 14 I received the following letter from the attorney's office. 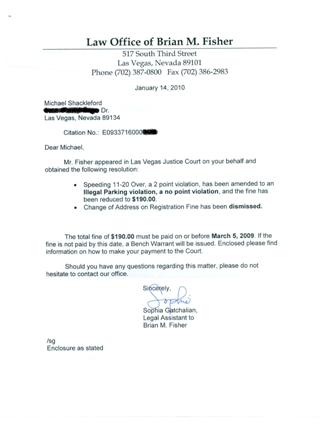 I expected the incorrect address violation to be dropped, because I sent a copy of the registration showing the correct address to the attorney, and mailed an original to the court. As the letter shows he basically got the court to change the citation from speeding to "illegal parking," which removed the points, and lowered the alleged fine to $190. I say alleged, because if I had settled the matter by calling the phone number on the back of the ticket, the fine would have been $190 anyway. That is what I expected to happen, so all's well that ends well.

However, I still don't have a good answer to why the judge accepted this plea in the first place. If I were a judge, I would be a tough one. In this case I would have said to the attorney, "You have presented no evidence the ticket was unfair, therefore I see no reason to reduce the fine. In fact, I should increase it for wasting my time." I received lots of comments about why the Las Vegas judges routinely drop the points on moving violations if an attorney handles the case. The main explanations were:

I had hoped to uncover some kind of conspiracy theory, but alas, I failed. However, I hoped you learned something. Finally, here are some pictures from the scene of the ticket. The left picture shows the Buffalo Wild Wings the officer was hiding next to. The middle picture shows the marquee of the shopping center it is located in. The right pictures shows the speed limit sign I ignored.