Greeting from New York City, where I'll be when this newsletter reaches you. This newsletter was written in advance. In thinking about a topic, I went back to a subject I know a thing or two about besides gambling. Before I was the Wizard, I was a Social Security actuary at their headquarters in Baltimore from 1992 to 2000. I'd like to think I know about as much about benefit calculations and Social Security demographics as anybody. Granted, I haven't thought much about it for 19 years, but much of that information is still in my brain somewhere, getting dusty.

Next, let's get into the details! For every month you apply early, up to 36 months, your full benefit, what is called the PIA, which stands for Primary Insurance Benefit, will be cut by 1/180. For example, applying three years early would cause a benefit reduction of 36/180, which equals 20%.

You can apply earlier than 36 months, as early as age 62. For every month you apply early beyond the first 36, your benefit will be cut by 1/240. Let's take a look at my situation, for example. I was born in 1965 so my full retirement age is 67. If I applied as early as possible at age 62 and 1 month (at the risk of muddying the waters too much, I won't get into that one month rule), my benefit would be cut for applying 59 months early. The reduction would be:

In other words, I would get 70.42% only of what I would receive if I waited until 67. However, I would get paid for 59 extra months, assuming I didn't die before 67 (or the program went insolvent , which is a distinct possibility). Any decision about when to apply should heavily weight on my life expectancy.

However, before we get into that, let me introduce Delayed Retirement Credits. If you delay retirement past your full retirement age, you get rewarded with an increase of 1/150 (for those born in 1943 or later) for every month you wait, up to age 70. After that, you may as well apply, as you no longer are rewarded for waiting. For example, if I waited until age 70 to apply, I would be rewarded with 36 Delayed Retirement Credits. That would increase my 36/150 = 24%.

Now that I've explained how are punished or rewarded for applying early or late works, let's get our hands dirty with the math. The following table shows what I'll call the "Benefit Ratio" for all ages of retirement from 62 to 70, for those born in 1960 or later. This Benefit Ratio is how much you get for applying at the given age to what you would get for applying at age 67, assuming you aren't still earning and potentially increasing you benefit by paying more Social Security taxes. 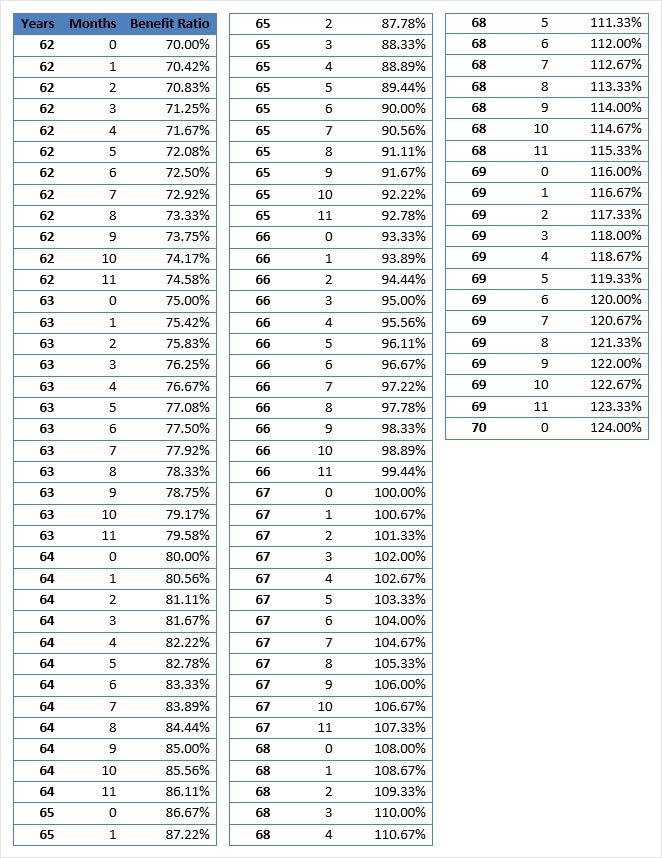 The following graph shows the Benefit Ratio by age one starts receiving retirement benefits, again for those born in 1960 or later. 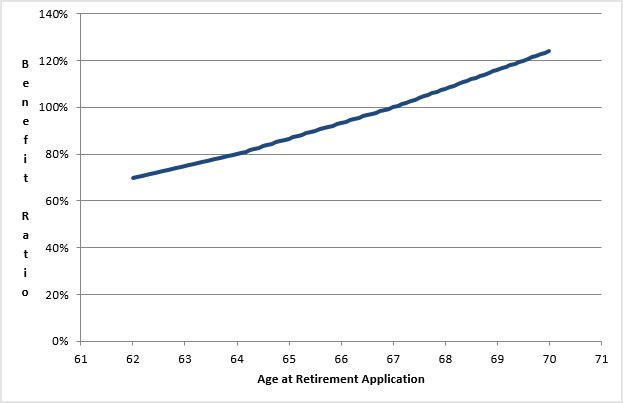 Next, let's ask the big question, "At which age should I apply to get the most money overall?" Again, that will depend in large part on when you will die. To help answer that question, let's look at Social Security's actuarial calculator. For my date of birth, it says that as of right now I can expect to die at the age of 82.4. However, if I make it to 62, my expected age at death goes up to 84.2. By the way, if I were female, my age at death now would be 85.6 and at 62 would be 86.9.

However, there are other factors that go into when you will die besides your year of birth and gender. Tobacco smoking, for example, will take many years, perhaps decades, off your life. Please remember that the next time you want to light up at the same pai gow table I'm playing. After considering all your risk factors, the following graph shows your optimal age of applying for retirement, to maximize total benefits received over your lifetime, by your expected age at death. 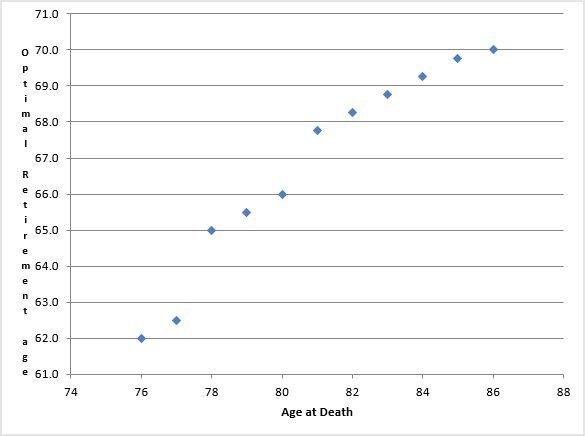 As an example of the use of this chart, I just mentioned that assuming I make it to age 62, I can expect to live until age 84.2. It is hard to tell exactly from this chart, but the spreadsheet from which it is based says that I will maximize my "expected value," to use a gambling term, if I wait until 69 and 4 months. If I do, I'll get a monthly increase of 18.67% for 28 Delayed Retirement Credits and enjoy being on Social Security of 178 months. That will equal 211.23 payments I would have received if I applied at age 67. If I applied at age 67, I would have received 206 payments.