With this newsletter we come to the final James Bond movie I will analyze. I saved the hardest one for last, Casino Royale. In this newsletter, I will take a look at the two short scenes, played in the Bahamas and on a boat. Next week, a special guest writer will analyze the big tournament scene, later in the movie. 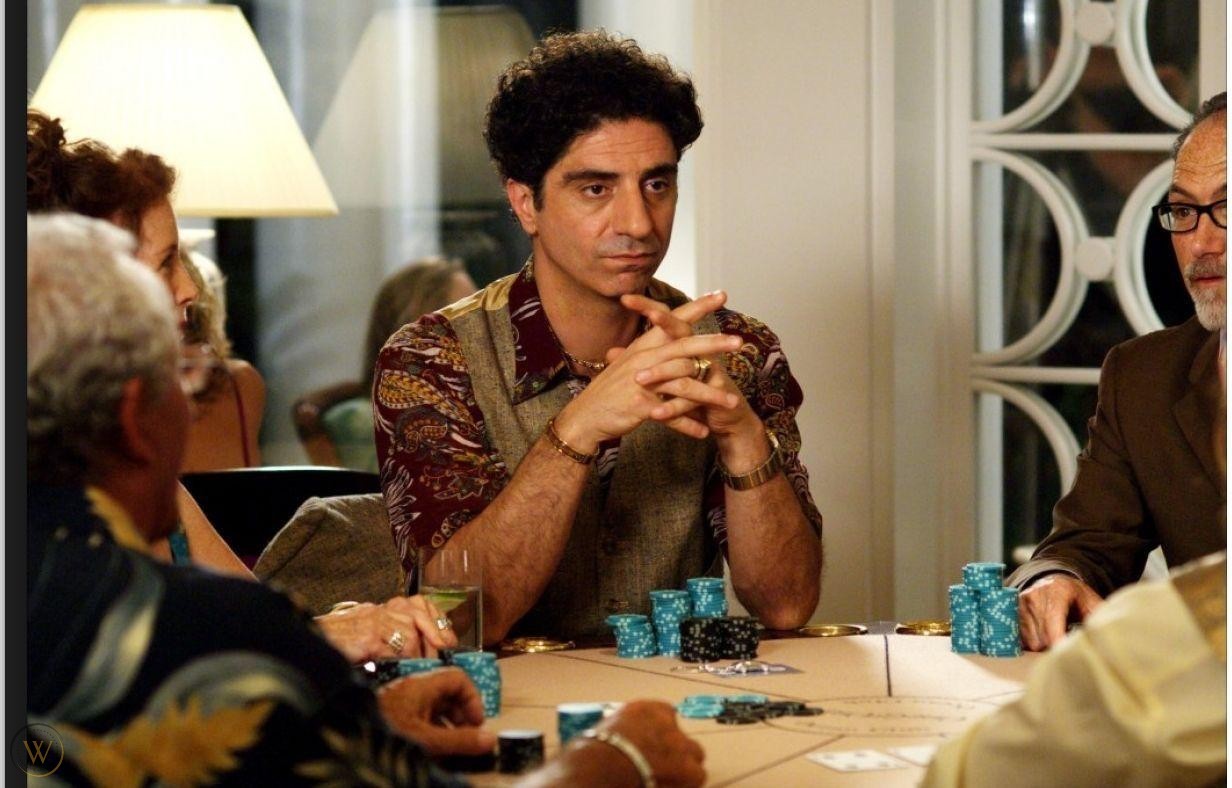 The first poker scene takes place at a small casino in the Bahamas. You may find a clip of it at YouTube. It takes place at the Ocean Club in the Bahamas, which is the actual name of the place. While the official currency of the Bahamas is the Bahamian dollar, I have played at a casino on Grand Bahama island, which used the U.S. dollar as well as every store and restaurant that I recall. The game played throughout the movie is no-limit Texas Hold ‘Em.

As the scene open Bond walks up to the table a nd asks to join. We get a look at the first hand at the 1:24 point in the YouTube video. We see the flop is a 9♦ - 3♥ - A♣. The dealer then deals the turn, the 7♥. Here are the hole cards the two players in play have, which we see later:

Bond, not knowing what Dimitrios has, can be beaten only if the river is hearts and Dimitrios’ hole cards are both hearts. Not considering the betting behavior, Bond should assume the probability Dimitrios has two hearts is 45/1035 = 1/23 = 4.35%. The probability of that and the river being another heart is (45/1035)*(9/45) =0.87%. Even if Dimitrios gets a flush, Bond can still beat him if the river is an ace, 3, or 9, giving Bond a full house or four of a kind.

Bond is first to act and checks.

At this point, Bond probably could have won at least $5,000 with a check-raise, but he plays it slow and cool, setting a trap.

At the 1:46 point, the river is dealt, the K♣. This gives Dimitrios three kings. He should feel very comfortable with that hand. The only way he can lose is if Bond holds two aces. I assume Dimitrious thinks Bond probably has just one ace. He probably would dismiss the idea of Bond have two aces because the chances at this point are 6/990 = 0.61%, not considering betting behavior.

Bond, again, is first to act and checks.

Dimitrious then goes all in. There is some discussion if he is allowed to bet his car, which would turn out to be the introduction of the Aston Martin DB5, seen in many other Bond movies. The dealer says the game is “table stakes,” to which Dimitrious argues the key was on the table. Both parties and the dealer allow it. Both parties and the dealer allow the car to be wagered.

Bond, of course, goes all in.

His trap was successful. Bond scoops the pot and car keys. Rubbing salt in Dimitrios’ wound, he asks for the valet ticket.

Moving along, the next scene takes place on a private boat. You may see this scene in another YouTube video.

At the 0:55 point, Le Chiffe goes all in, saying “I have a two pair and you have a 17.4% chance of making a straight.” The opponent folds, so we don’t get to see if this statement is true. The movie does not explain why he says this. If it was true, Le Chiffe was a fool to disclose this information, as his expected value was greater letting his opponent call, assuming the all-in bet was at least 22.2% as much as the pot before. Looking at the chips, the bet looks significantly more than the pot. However, he could have been lying. There are other possibilities, like he was trying to build trust or was showing off. 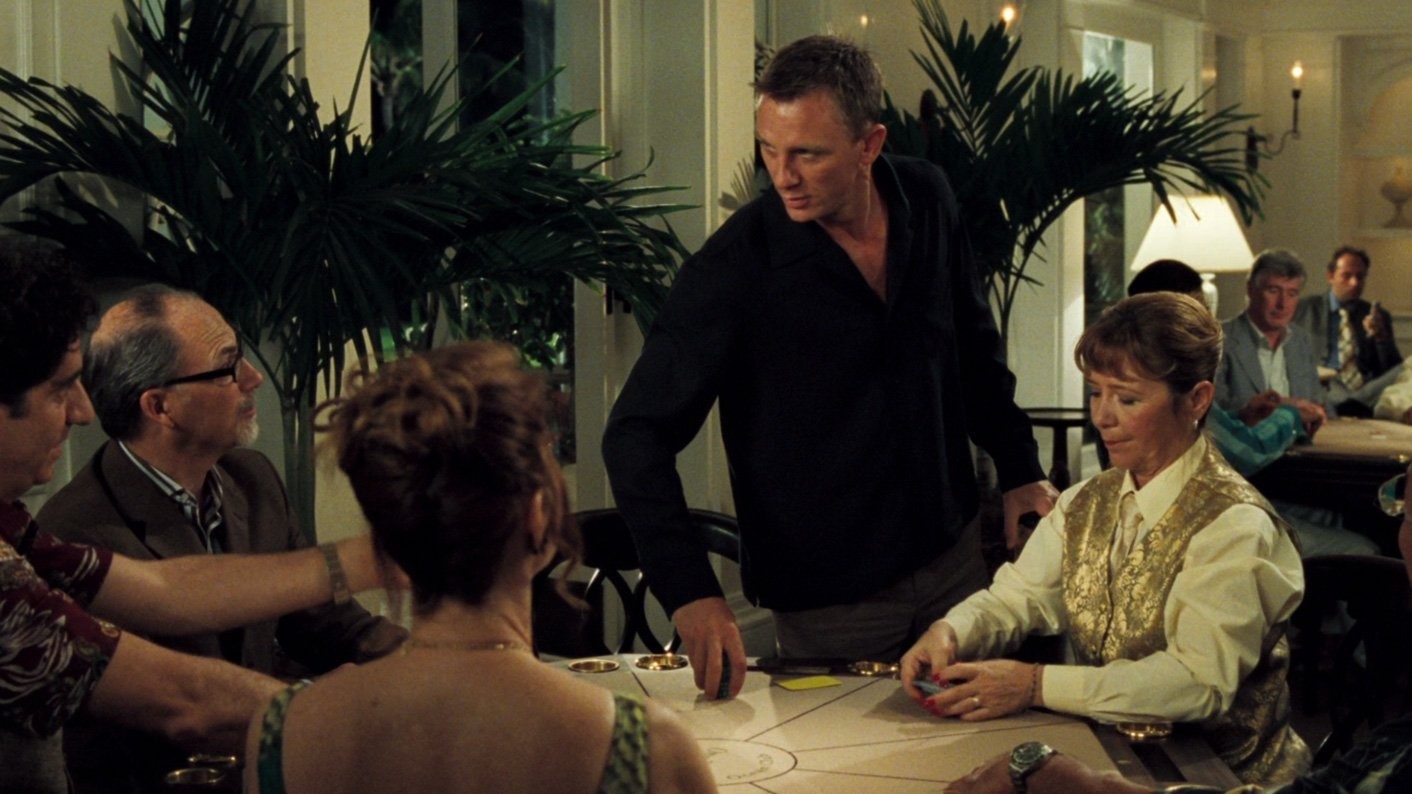 I assume the cards were something like this, assuming Le Chiffe is being truthful:

This would indeed give Le Chiffe an 8/46 = 17.4% chance of making an outside straight. Usually, movies with a gambling scene get details like this wrong, so kudos to the makers for getting the probability right.

The other player folds and we don’t see what anybody had.

Next week, we will look at the tournament scene later in the movie. We will have a guest author write that one. She is a much stronger poker player than me and I look forward to her analysis.

Until then, may the odds be in your favor.