Let me start this newsletter with a disclaimer. Not only am I not an epidemiologist, I managed to get through life without ever taking a biology class after junior high. One frog dissection is enough for one lifetime. However, in my defense, I recently helped dissect a cow's eye and heart at an event at Johns Hopkins University.

That said, I don't think one needs to be an epidemiologist to make an educated guess where the Corona Virus epidemic is heading. China has had a big head start and has managed to effectively halt the spread of it. As evidence, consider the following chart of total cases in China up to March 8. It is not difficult to see the total number has flattened out while more and more people under treatment recover. 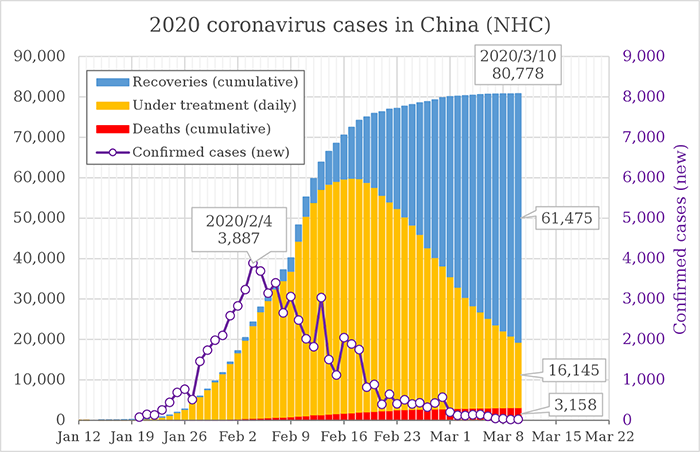 Next, consider the following table of the leading four countries in Corona virus deaths as well as the United States (which ranks 8th), as of March 11.

Let's take an even worse country on a percentage basis, Italy. There the ratio of population to infections is 5,957 and population to deaths is 95,819.

Let's assume the United States will fall somewhere in between. As the table above shows, the United States has a population of 331,002,651. This would put the total estimated cases and deaths before the virus spread is halted as follows:


Our numbers now are still quite low. This argument shows we have a ways to go. However should we be panic selling of stocks and panic buying of bottled water and toilet paper? I think not. Even in a bad case scenario of 3,454 deaths, compare that to the 480,000 deaths per year in the United States due to tobacco (source: CDC.gov). Even under that pessimistic prediction, that is as many Americans die from tobacco in 2.6 days.

That said, I fully support all effort to contain the virus as much as we can. This includes as "social distancing," and washing your hands more often, especially when exposed to others.

In the last 16 trading days, the S&P 500 index (I believe a better estimator than the DOW) has dropped 18%. As with the days after 9-11, I think this is an overreaction out of fear.

In closing, on this topic, I would like to summarize by saying don't panic. We've all seen a lot of wordplay on the British slogan during World War II, "Keep Calm and Carry On." My twist on that is "Keep Calm and Wash Your Hands."

Finally, I would like to pose a math puzzle for this week's newsletter.

The World Series is about to begin between the Angels and Braves. For my non-American readers, this is a contest in which the winner of the series is the first team to win four games. All bets pay even money and have a 50% chance of winning. There are no series futures, you must bet game by game. You wish to bet on the Angels. Your goal is to either win $8000 if the Angels win the series or lose $8000 if the Braves do. What should be your strategy? A correct answer should address all 16 possible scenarios of past games. An answer of a bet $8,000 on the first game would not work, because the Braves might win. You want to win $8,000 if the Angels win the series and lose otherwise.