You may recall from my newsletter two weeks ago that in late June I spent a week in Colorado climbing “14’ers,” which are mountains over 14,000 feet high. In this newsletter I will write about the “Decaliborn,” which I did on June 28, 2020. 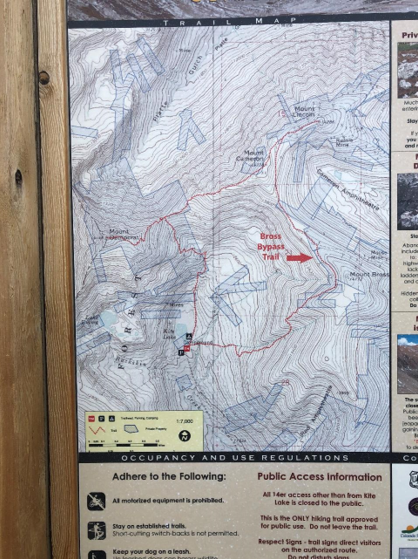 The Decalibron is mostly a loop hike that covers four 14’ers: Mount Democrat, Mount Cameron, Mount Lincoln, and Mount Bross. The name Decalibron is a portmanteau (your new word for the day) of the names of these four mountains. This is a fun, well-traveled, and challenging hike that I think will addict many people to the Colorado 14’er quest. It is also a convenient way to cross three or four (depending on whether you count Mount Cameron) off the 14er list.

To get to the trailhead, get to Alma Colorado somehow and go west on Buckskin Street. It quickly turns into a dirt road (County Road 8) but is well maintained and any vehicle except a sports car should be able to handle it. Stay on CR 8 the whole way. In 5.4 miles, park at the Kite Lake parking lot/campground. There are envelopes to self-register and pay a small fee. It was quite difficult to stuff my envelope in the box as it was already crammed full. There is plenty of parking, so do not worry about that.

Just past the trailhead, you will be put to a decision on which direction to go. My book ‘The Colorado 14ers – The Best Routes’ advised going in a clockwise direction, or doing Mount Democrat first which is what my son and I did.

Going that way, the hike starts in a nice flat meadow, passing what is appropriately named Kite Lake. However, it doesn’t stay that way long. Soon, it gets steep. Suddenly you’re reminded you are at high altitude where the air is thin, and breathing does not come as easily. The effort is worth it, with views of the lake and the valley surrounded on three sides by mountains.

After an hour or so, you will be at the ridge between Mounts Democrat and Lincoln. Here one must take a side trail to do Mount Democrat. This side trail is mostly a big steep pile of rocks. Being on a ridge, it is also quite windy. There can be little doubt that this is the hardest part of the whole hike. After about another hour of stepping from one rock to another, you will be atop Mount Democrat and 14,155 feet above sea level. 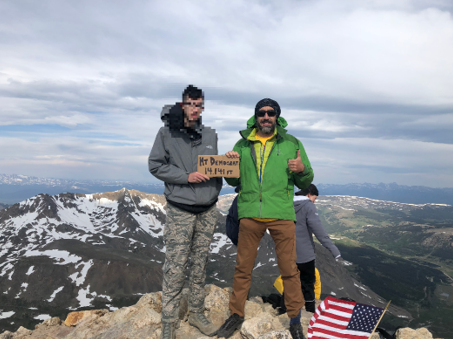 Next, go back down the rock pile and get back on the loop trail. The day I did it there were plenty of other hikers so it would have been almost impossible to get lost. While the trail is easy to lose in places, just stay on the ridge line at this point.

This point of the loop is moderately uphill to Mount Cameron. I roll my eyes a little bit when writing Mount Cameron, because it is a lump on the ridge between Mounts Democrat and Lincoln. In my opinion, it does not deserve to be called a 14’er, because it does not have enough prominence and geographic isolation. However, I also claim I did eight 14’ers in Colorado, which counts Cameron. I admit I play both sides — complaining when I get the chance, but also stating I did eight as opposed to seven 14’ers. 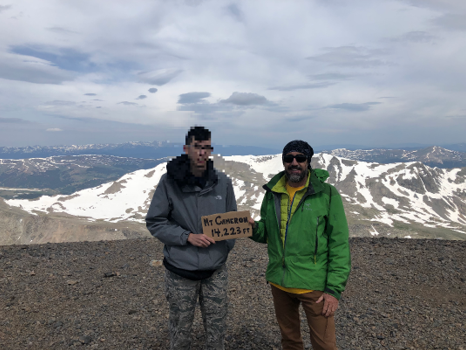 It is then more level hiking to the split-off to Mount Lincoln. The signage on this hike is pretty poor, but fortunately there were plenty of other hikers to follow to Mount Lincoln. After the split-off, the hiking gets more steep, but not as bad as the trail to Mount Democrat. A short while later, we were standing atop Mount Lincoln at 14,293 feet, the eighth highest summit in the Rocky Mountains. 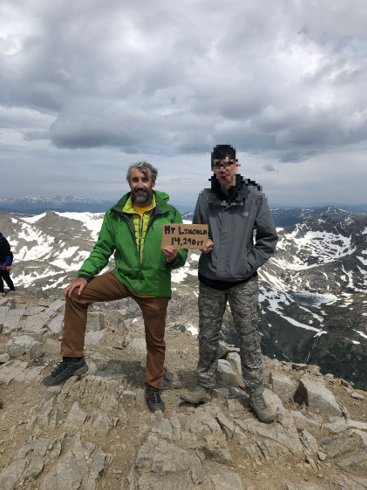 From Lincoln, it is back to the loop and then an easy, almost level, walk towards Mount Bross. My book stated that Mount Bross was on private property and the owners, I believe a mining company, no longer allow public access to it. A diversion trail was made to avoid the summit. Said book requested hikers respect the land-owners request to not climb it and said one could still get “credit” for making the summit, despite taking the diversion trail.

This diversion trail is a deliberate effort to avoid the summit. It gets within about 50 vertical feet of it, and taking it would save little hiking time. Let me say that in general I respect the rules when on other people’s property. If I visit your home, I will respect your rules and I would expect you to do the same in mine. On the other hand, I’d like to share this stanza from the Pete Seeger version of ‘This Land is Your Land’.

“Was a big high wall there that tried to stop me,
Was a great big sign that said, "Private Property,"
But on the other side, it didn't say nothing,
That side was made for you and me.”

Source -- The Story Of Woody Guthrie's 'This Land Is Your Land'

I am not going to say which way I went. Should you do this hike, follow your own conscience. I will say that, not counting me, I noticed about 40 people who would have also faced this moral dilemma. 100% of them took the trail directly to the summit of Mount Bross.

Either way, it is downhill the rest of the way back to the trailhead. This part of the trail is loose and rocky in places, so be careful. In places the trail can be easy to lose. When in doubt, take what seems like the safer way, as opposed to steeper or shorter. Do not necessarily follow the crowd, as many hikers incorrectly think that the direct way is always the right way. This advice goes for any hike.

After about eight hours later, you will be back at the trailhead parking lot. The overall distance is 7.6 miles, which doesn’t sound like much, but remember there is a lot of elevation gain (3,300 feet) at high altitude. For more information, please see The Decalibron: Mounts Democrat, Cameron, Lincoln, and Bross Trail.

When you’re finished, I recommend celebrating at South Park Brewing in Fairplay, CO.

Finally, in last week’s newsletter I spoke of taking an IQ test in hopes of scoring in the top 2% and qualifying for Mensa. I am happy and pleasantly surprised to report that I made it, barely. The minimum “full scale” IQ for Mensa is 130, which is exactly what I got. I bury this at the end because I don’t like to toot my own horn, but feel I had to follow up from last week. Shortly after receiving the good news I submitted my scores to Mensa and am awaiting to hear back. I look forward to participating at their in-person events as soon as it’s safe.