There seem to be two types of people – those who collect things and those who do not. I definitely am in the former camp. Never once did weigh the pros and cons of starting a collection of anything. If I did, the cons list would be much longer. Unless you can put a value on the fun factor, I do not recommend collecting anything. You can expect to throw away a lot of money, time, and space for something that will probably go down in value that your kids will liquidate when you die to the first person to come along paying, at best, half the collection’s value.

That said, I must get something out of it, because I have collected so many things. My biggest collection by far is license plates. However, other things I actively or formerly collect are:

A major part of my collection of casino chips is $8 Chinese New Year commemorative issues. To count, it must celebrate Chinese New Year and must be for $8. Why 8? Because the word in Chinese for the number eight sounds like the word for “wealth.” In Macau you see the number 8 all over the place. There are lots of Chinese New Year chips for other common denominations, usually $5, and also $8 chips for purposes of $4/$8 poker, but those are not my emphasis.

My earliest $8 Chinese New Year chip is from 2001, but they go back before then. I think the first casino to issue one was the Las Vegas Hilton, in a limited offering, back in the 80’s, but I could be wrong about that. However, I would say they didn’t catch on until the mid-2000’s. Even at its peak, only certain casinos issued them. In Las Vegas, this would include the Wynn, MGM, Venetian, Palazzo, Palms, Palace Station, and Bellagio. Most properties made them in the big baccarat size. 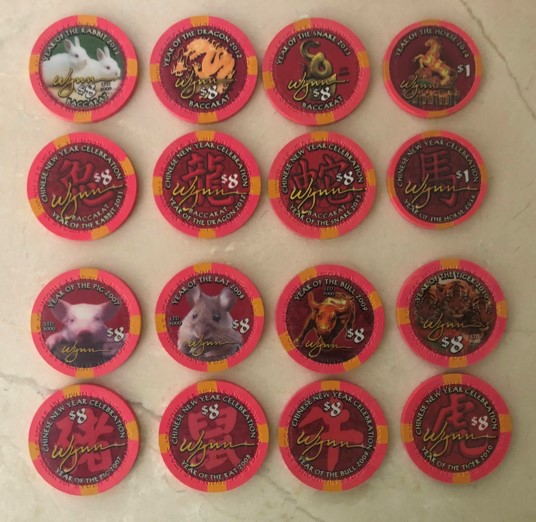 It all ended in 2014 when the Nevada Gaming Control board ceased to allow them. As I understand it, Gaming’s argument was that chips are supposed to be for the purpose of gaming and almost nobody was betting the $8 chips. Personally, I disagree with Gaming’s position on this. It costs only about $1 to make a casino chip without an RFID microchip inside. The casino profits $7 per chip and the buyer is happy too – win/win situation. Maybe it is for the best as the many chips I do own seem to have gone up in value. Most go for about $15-$25 each on eBay.

Like most things I collect, my Chinese New Year chips are not well organized. I try to group them by year, but lots are in the wrong place. I would love to get display cases for them, but I can’t find displays for the large baccarat size chips. Let me show you just a couple examples from the two casinos who I think make the best chips. Both front and backs are shown.

On my forum at Wizard of Vegas, one of the longest threads is titled Casino Chip of the Day. Many of my members collect casino chips, most with the goal of getting a chip from every casino he visits. I posted for a while about Chinese New Year chips, starting with this post.

Finally, here is an article from the Las Vegas advisor about the demise of the $8 Chinese New Year chips.

That is an introduction to $8 Chinese New Year chips. If you would like to suggest a topic for a future newsletter, please let me know. Sometimes (like this week) I have a hard time thinking of anything to say.