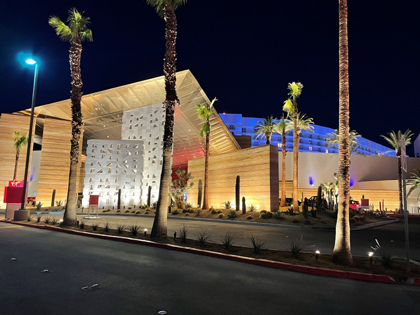 Last Friday, I paid my first visit to the Virgin Las Vegas, what was formerly the Hard Rock. It had opened the previous day.

I was surprised to find the casino is called the Mohegan Sun and is evidently a separate entity from the hotel, which is under the Virgin brand. The casino doesn't seem any better than it did as the Hard Rock. In fact, I think I liked it better as the Hard Rock. Gone is the center bar with a circle of table games around it. It's now mostly slots with no particular theme. There were entertainers scattered about that received little attention.

Here are some game rules.

Blackjack: On the main casino floor the game was six decks, 3-2, dealer hits soft 17, double after split allowed. No surrender. No re-splitting aces. Mostly $25 minimums. I saw only one table at $15. In the high-limit room they have what I call the "liberal Strip rules": six decks, 3-2, dealer stands on soft 17, double after split allowed, surrender allowed, re-splitting aces allowed. $100 minimum. Kudos for no 6-5 blackjack, but I predict that won't last.

Craps: 3-4-5x odds. They had the Fielder's Choice and Repeater side bets.

Other: The only other two games I noticed were Face Up Pai Gow Poker and Free Bet Blackjack.

Video Poker: Here is a $1 machine I chose randomly on the casino floor:

I then checked a random game in the high limit room and the pay tables were the same at both $5 and $25 denoms.

Sports Betting -- They had a small Betfred outlet, which wasn't open yet. I welcome another "out" in Vegas.

I will say the drinks at the tables were a nice pour served in plastic cups. There were dividers between the slots. This would make it awkward to play side by side with a friend as you can't hear each other well.