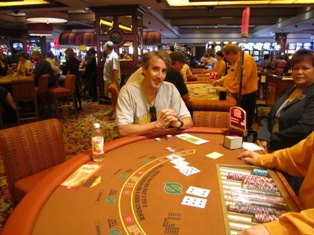 Zero is a card game that combines elements of blackjack with baccarat. The object of the game is to win by having a point total closer to 0 than the dealer.

The game was offered at the Golden Nugget in August, 2011.

The house edge of a Zero wager is 2.2637% in a 6-deck game and 2.2421% in an 8-deck game. These values were calculated using combinatorial analysis assuming optimal play.

Zero Pays is an optional side bet that wins if the player's first two cards add to 0 points or if the player?s first two cards plus the dealer?s up card add to 0 points. The following two tables show the pay table and the probability of being dealt each winning hand for a 6 and 8 deck game. The lower right cells show the corresponding house edge of 7.75% for six decks and 7.43% for eight decks.

I'd like to thank Cindy Liu for the math analysis of Zero, and SquareJack Gaming for sharing it with me.