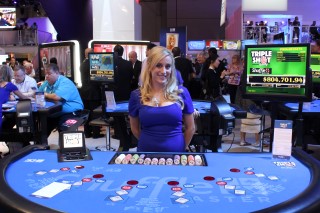 I first saw Triple Shot Rummy at the 2015 Global Gaming Expo. As far as I know, its casino debut was at the Rampart casino in Las Vegas on February 11, 2016. Aside from a change in side bets, it is the same as Vegas Three Card Rummy, which has been played at some Internet casinos for years. The rules are similar to Three Card Poker, except hands are scored much differently.

The following table shows the possible outcomes of the bonus bet. The lower right cell shows a house edge of 7.28%.

On the Ante bet, the player should have the same folding point as the dealer, raising with 20 or fewer points, and folding with 21 or more.

In my opinion, for purposes of comparing one bet to another, the element or risk should be used, which is 1.96% for the ante bet and 7.28% for the Pair Plus bet. So between the two, the Ante is the much better bet.

Discussion of Triple Shot Rummy in my forum at Wizard of Vegas.