Slingo Deal or No Deal

What do you get when you cross Deal or No Deal with Bingo? You get Slingo Deal or No Deal. This is an exciting game, that is mostly luck, where a bet lasts a long time (about 1.75 minutes to get to the first opportunity to exit). Be warned the game will tempt you to keep going, which can get expensive paying for extra spins.

The rules are rather difficult to explain, but the game is quite easy to learn and play. You might wish to watch my video (see below) to learn the ropes.

If these rules were unclear, here are images of the rule screens. Click on any of them for a larger version.

The help screens say the RTP (Return to Player) is 95% on all wagers made. This includes the initial wager, accepting banker offers, and the fee for extra spins. I believe this to be true. Without knowing the probability of the jokers, devil's and free spins, I would have little way to analyzing the game myself.

In terms of maximizing the expected return, which is the ratio of money won to money bet, the only strategy in the game is where to open suitcases with jokers. I recommend this general strategy:

Still, you will often have multiple choices of suitcases that fit the same category above. In that case, I would try to balance the number of cases opened per column as much as you can. This is because an ordinary joker (with a red hat) doesn't help you if every case in the column the joker appears is already opened.

I would also be mindful about minimizing money lost over time. The player gets about 1.5 to 2 minutes of playing time on his initial bet, before he has a chance to exit the game, depending on how fast he plays. After that first stage, the game gets expensive, especially if big wins are still in play. In the first game in my video below, I started with a $1 bet and ended up betting $214.89 by the end of the game. Remember, every additional bet carries a 5% house edge. In other words, the cost of extra spins are overpriced by 4.76%.

I think it is easier to explain this game by example, as opposed to in words. That is why I made this video for you. 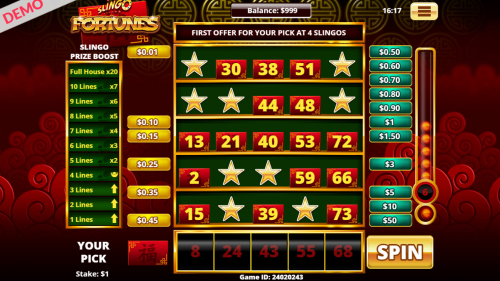 Slingo Fortunes seems to be exactly the same game, but with an Asian theme. 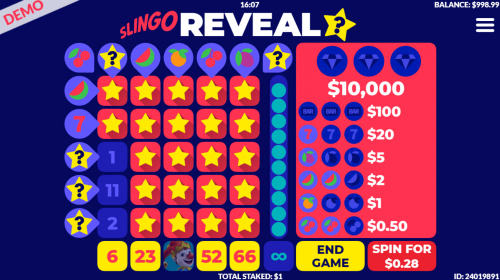 Slingo Reveal is similar to Slingo Deal or No Deal and Slingo Fortunes. Here are the main differences: