Fan Tan is a game found at the larger casinos in Macau. The game uses a pile of white buttons, a cup, and a wand. The game is played on a table about the size of a large craps table. The middle is the dealer's territory, which is covered by a clear plastic dome. On either side of the table are betting areas where up to about six players on each side may play comfortably. The betting portions of the table are plastic. After the outcome is determined all winning bets will be illuminated, the same way as in Sic Bo.

Play starts with the dealer placing a cup over some of the buttons, in my experiece an average of about 60. Then players will place bets among many to choose from. Next, the dealer will remove the cup and use the wand to count off the buttons underneath in groups of four. Bets will pay according to the number of buttons in the last row, which will be from one to four. All wins pay fair odds, less a 5% commission, applied to the win amount. The 5% commission is not applied to pushes. The table belows shows the win on a "to one" basis, after adjusting for the 5% commission.

Following are the types of bets available. I got the names from the Venetian Macau rule booklet.

The following table breaks down the possible outcomes of each bet.

Gameplay Interactive, a provider of live dealer games for Internet casinos, uses cards instead of beads to randomize fan tan. Here is how they do it: 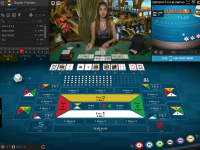 My thanks to 7craps and Pari/GP for their help getting more than 15 decimal places in the 12-card tables above.