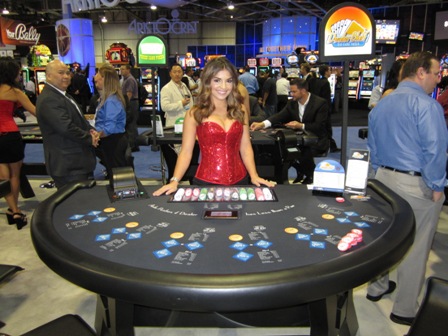 Dealer Bluff is a new poker-based variant I noticed at the Wynn on September 25, 2009. Since then it was removed, the rules were tweaked, and in September 2012 it was put back in the Wynn. In January, 2013, it appeared at the Red Rock.

What sets Dealer Bluff apart from all other poker variants to date is that the dealer makes the first move and the player reacts to what the dealer does. To prevent cheating or reading the dealer's face, this is done with the aid of an electronic card reader, which determines how much the dealer bets.

Note: Under the California rules, the dealer has the option to call, among other rules differences.

The dealer will choose his raise according to his hand and the following probability table.

I have not done by own analysis of this game yet. Until then, I present the following strategy indicated in Shufflemaster's math report by Elliot Frome, which is used with permission.

The following table shows the probability and return from each hand for the Aces Up side bet. The lower right cell shows a house edge of 6.62%.

The Two Way Bad Beat bet pays if the either the player or dealer gets a pair of aces or better and loses. The following table shows a house edge of 10.60%.

I would like to thank Shufflemaster for providing the math report for this game. All credit for the math goes to Elliot Frome. I have personally verified the math is correct on the Aces Up side bet. The probability of a straight flush losing in the Two Way Bad Beat bet is based on my Bad Beat Jackpot Odds page.

At the Pala casino in California they had a different version of the rules of Dealer Bluff, as covered by Discount Gambling.