Daredevil Poker is a poker-variant in which both player and dealer get seven cards, the higher hand wins. The player may choose how many cards to play against the dealer, the fewer the cards, the more he stands to win.

As of this writing in October, 2022, the game can be played at the Hialeah Park casino in Florida. It is marketed by Galaxy Gaming, who promoted it at the 2022 Global Gaming Expo.

In the image below I bet $100 each on the Ante and Odds. I also bet $5 each on the Prime 7, Safety Net, and Bonus Jackpot. I chose to hold the pair of eights only. 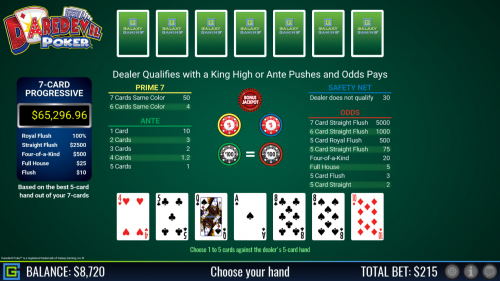 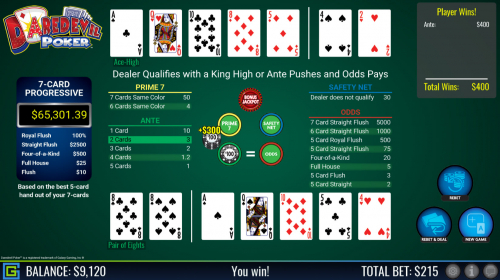 You can play the demo where I got these screenshots for free at Galaxy Gaming.

The following is the strategy developed by Charles Mousseau, the original mathematician of Daredevil Poker, which he says is "close approximation" to optimal strategy.

The two required wagers are the Ante and Odds. According to Charles Mousseau, the original mathematician for Daredevil Poker, the player advantage on the Ante bet is 41.87%. As the following table shows, the house advantage on the Odds bet is 45.24%. With equal bets on both wagers, the player can expect a net loss of 3.37% of the Ante bet. In other words, the house edge is 3.37%, based on the Ante bet only. If the house edge is based on both mandated initial bets, it is 1.685%.

Following is my analysis of the mandatory Odds bet. The lower right cell shows a house edge of 45.24%.

The following is my analysis of the Safety Net side bet. The lower right cell shows a house edge of 8.18%.

Following is my analysis of the Flush side bet, which wins if the player has a flush of length at least 4. The lower right cell shows a house edge of 7.81%.

Following is my analysis of the Straight Flush side bet, which wins if the player has a straight flush of length at least 3. The lower right cell shows a house edge of 13.09%.

Following is my analysis of the Prime 7 side bet, which wins if the player has at least six cards of the same color. The lower right cell shows a house edge of 5.10%.

I would like to thank Ashford Kneitel, the game owner, for the math report from Charles Mousseau, which aided greatly in this analysis. The analysis in this page is all my own except for the Ante bet and strategy, which I attribute to Charles.