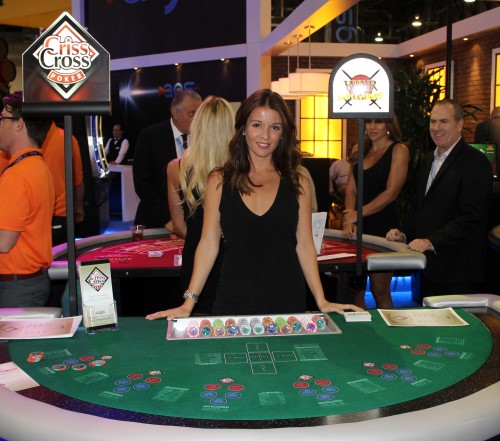 
Criss Cross Poker is poker variation by In Bet Gaming. In 2014, I started to hear reports of the game in several casinos in the eastern United States. The thrust of the game is the player bets on two hands, in part using five community cards placed in a cross pattern.

Between two sets of possible hands, four combinations of raise bets, and folding at various stages of the game, there are 975 possible outcomes. I indicate the probability of all of them in my Criss Cross Poker Full Expected Value Table. However, I don't want to scare you off with that gigantic table here. Instead, I summarize the outcome of each hand below.

Ante Across and Across Bets

The following table shows the possible outcome of both the Ante Down and Down bets. The "pays" column shows the combined win between the two bets. The lower right cell shows that the player can expect to lose 0.597666 units on the two bets combined.

Ante Down and Down Bets


The following table shows the possible outcome of Middle bet. The lower right cell shows that the player can expect to win 1.111675 units on this bet.


The next table summarizes the expected win of all three groups of bets.


The lower right cell shows an expected loss of 0.086571 units. Since the player must wager two units at least, I divided that by two to get a house edge of 4.33%.

The standard deviation, relative to the combined initial wager, is 4.802.

With all decision points, the only viable options are fold, minimum 1x raise, or maximum 3x raise. Never raise anything between 1x and 3x.

This is a very similar decision to raising on the Across hand. However, the player has the benefit of seeing two extra cards. This can help in borderline situations. I have not implicitly identified these deviations from the Across strategy. However, I can say that knowing them, whatever they are, will increase the expected return by 0.29% the amount of the Ante Down bet, or lower the house edge by 0.15%.

With four cards seen, there are thousands of possible situations in terms of a Middle bet strategy. However, a perfect decision can be made by averaging the win over all possible 46 cards left in the deck under both a small and large Middle bet. I can say that if the player made either 3x bet, then he shouldn't fold. I can also say that 4.5% of the time the player will make both a small Across and Down bet and then fold the Middle bet.

The following table presents the possible outcomes of the Five Card Bonus Bet. The lower right cell shows a house edge of 3.53%, which for a side bet isn't bad.

Full expected value table. This page shows the probability and return from all 974 possible outcomes.