Big Rollover Poker is a variant of Ultimate Texas Hold 'Em by PureRNG, a software company that provides games to Internet casinos. The rules are the same as Ultimate, except the large raise may be made for 3x the Ante only, as opposed to up to 4x. This rule changes increases the house edge from 2.18% to 9.86%.

There are 52 possible outcomes of each hand. The table below shows the probability of each and the contribution to the total return, assuming optimal strategy. A 3X raise is referred to as a "large raise," a 2X raise as "medium," and 1x as "small."

The following is my "Wizard Strategy" for Big Rollover Poker, which is the same as for Ultimate Texas Hold 'Em®.

Large Raise: The following table shows when to make the 3X raise. 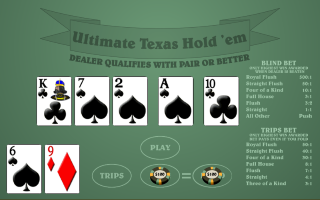 The following side bet is offered, which pays based on the poker-value of the player's hand only. The lower right cell shows a house edge of 6.18%.

Please do not play this game. As mentioned in the introduction, limiting the large raise to 3x increases the house edge from 2.18% to 9.86%. This is unforgivable and merits the Wizard's finger wagging of shame.