I visited Victoria, British Columbia, between July 8 and 12, 2011. I'll write about my other experiences in Victoria in a separate blog entry. For this one, I will focus on my visit to the View Royal casino.

The View Royal casino is one of only two casinos on Vancouver island. The other one is way up north, so the View Royal is pretty much the only gambling option close to Victoria. When I arrived in Victoria, all I knew about said casino was it was somewhere on the edge of town. I didn't plan to rent a car, so envisioned having to hire a cab to get there.

However, that turned out not to be necessary. The View Royal makes it easy to get there from downtown Victoria. The friendly staff at the visitor center at the Victoria inner harbor gave me a brochure for the casino and a schedule for the free shuttle. Said shuttle makes a loop every 90 minutes, making six stops in central Victoria, including the Royal Museum.

The shuttle ride takes about 20 minutes. Despite the name, the View Royal casino does not offer a royal view of anything except a used car lot across the street. The casino is small to medium in size, with about 500 slots and about 20 table games. All casinos, and there are several of them, in British Columbia are strictly overseen by the provincial government, although actual management is done by private companies. Based on answers given to me by the slot manager at the View Royal, all BC casinos are part of the same player reward program and inclined to offer the same game rules.

I quickly found there is little to do at the View Royal besides gamble. There is no smoking (yeah), no alcohol (boo), and no music (boo). The clientele seemed like locals, but it was hard to tell as most players just sat there and played without saying a word. Canadians I find in general to be more quiet and introverted than Americans, but the View Royal was quiet even by Canadian standards. If you prefer to be left alone while you play, you shouldn't have any problem at the View Royal. If you're looking for excitement apart from the actual gambling, you probably won't find it. The median player age was about 50.

I visited the casino from 7 PM to 9 PM on Sunday, July 10. About half the table games were manned, and of those the average number of players was about three. I would estimate about 25% of the machines were being played. Other than the casino, there is a snack bar in a separate room. In the penny slots room there is a small bar, where I was told you could order alcoholic beverages. You could not those beverages elsewhere in the casino, however. There was also a counter to buy lottery tickets. With the generalities out of the way, here are the games they offered and the rules.

Video poker does not seem to be very popular at the View Royal. I would estimate the ratio of reeled slots to VP to be about 20 to 1. What games I did find were multi-denom with the following games:

Compared to Las Vegas, these pay tables are pretty stingy.

The BC casinos web site says:

Generally, as part of the "house advantage," slots on average keep about 8% of all the wagers played over the entire life of the game.

It doesn't specifically say the BC slots are set to 92%, but I would agree that 92% is more or less an industry average, and comparable to what you would get in Vegas.

I wrote down the pay tables of 8-spot keno and analyzed it when I got back home, as follows.

Here are the blackjack rules.

The house edge is 0.55% with correct basic strategy.

They also offered the stingy version of the Lucky Ladies side bet. This is the one that pays 9 to 1 for a suited 20, for a house edge of 24.7%. 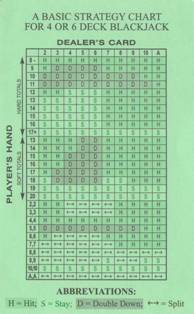 I might add that the tables had basic strategy cards available. However, said cards were based on a different set of rules. In particular, one where the dealer stands on a soft 17, no surrender, and no double after a split. Here are the costs of the errors made if the player were to use the card provided.

Sorry, no craps. Until about five years ago, dice games were completely illegal in Canada. I'm told the larger casinos in the mainland offer the game, but it isn't popular enough to be profitable in a small casino like the View Royal.

There was an electronic poker game that was shut down when I was there. 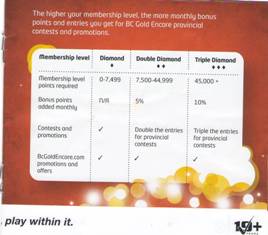 The player's club is useful for slot players only. Table games players do not get rated. Points are earned at the following rates:

Overall I found the staff to be helpful when I had a question. However, the dealers I encountered were otherwise as quiet as the players. Tipping barely generated a "thank you." You could sense the apathy that is common when dealers have to share tips. However, the floor supervisor was very helpful with my many questions.

The staff at the player club table by the door were much more friendly and helpful, although they were not used to some gaming terminology that is common knowledge in Vegas. When they couldn't answer a question they paged the slot manager who came down and tried his best.

I admit I can be somewhat of a pain when it comes to questions. Outside the casino I bothered every waitress I had about the difference between a shrimp and a prawn. Most incorrectly said the only difference is the size, but that is another story.

Overall I found the View Royal casino to be a nice place to do a little gambling, but nothing to go out of your way for. You find similar games and rules to what you would in any other small casino in North America.

I hear there is talk of building a larger casino close to the cruise ship terminal in Victoria. If I lived there I would vehemently oppose this. I think it would ruin the charm of Victoria, which is just about the most scenic and clean city I've ever seen.