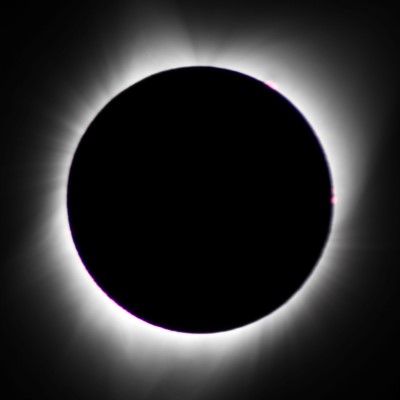 Members of my Wizard of Vegas forum can tell you I've been talking about the August 21, 2017 eclipse since July 22, 2009, or the date when I saw a total eclipse in China. You can read all about that experience in my blog entry Total Eclipse 2009. Since then, I've been counting the days until the first coast to coast total eclipse in the United States since 1918.

At first, my plan was to drive up from Las Vegas to eastern Idaho to take in the eclipse, roughly around the city of Rexburg. About six months before the big day, I decided it was time to get serious and start preparing. So I looked into booking a hotel room. By that time, everything in eastern Idaho was booked solid.

After being rebuffed in my plan to view the eclipse in Rexburg, I looked into rooms in Boise, which was about 60 miles from the total eclipse path. Fortunately, there were still a few places with availability at reasonable prices. Since Boise was a bit far to drive, I booked a flight along with my hotel room and continued to wait.

As the months passed, I conjured up a whole week-long vacation to go with the eclipse. One of the items on my bucket list is to climb every Cascade volcano that is both high enough to be a challenge and safe enough for someone of my skill set to climb (which excludes two or three). Since I was in the area, I decided to climb South Sister in Oregon and Mount Adams in Washington. A friend of mine got wind of my eclipse vacation and asked to come along, which I happily agreed to.

As I mentioned in my blog entry on the 2009 eclipse, my advice for a total eclipse virgin is to just enjoy your first total eclipse. Leave the photography to the experts. However, this was my second. This time I wanted to come away with more than just memories, so I lugged a lot of camera equipment with me in my luggage. This was in addition to all my mountaineering gear, so I pushed the limits with my two free 50-pound bags with Southwest.

When I got my rental car, the agent warned me to expect eight-hour traffic jams both before and after the eclipse. He handed me a piece of paper from the Idaho Office of Emergency Management suggesting a long list of things to bring for the eclipse, including a two-day supply of food and water, per person. That definitely got me freaked out. It was my original plan to leave about 5 AM for the path of totality. He convinced me to move that up to 2 AM.

As planned, around 2 AM, my friend and I departed Boise for Huntington, Oregon, which was near the center of the totality path. It was also just off Interstate 84. I had all kinds of back-up plans if I found that the 84 had turned into the Los Angeles 405 freeway in the middle of rush hour. Although I expected the worst, I sailed north with no issues at all. Other than warnings signs about not parking on the side of the highway for the eclipse and a huge presence of the Idaho Highway Patrol, nothing seemed out of the ordinary.

I made it to Huntington without a single issue. I had expected to pay some farmer extortion prices to park in his field but instead had the center of town almost to myself. I easily found a parking spot right in front of the general store, so I parked there and went back to sleep. 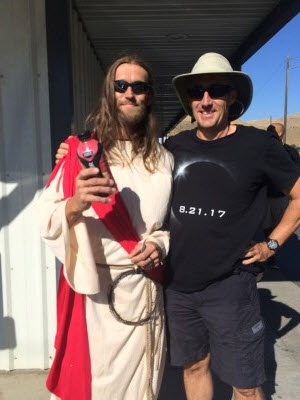 Little did I know, Jesus could change water to an energy drink too.

When I woke up about 6 AM, the town was starting to buzz with excitement. The main street was busy with cars, while the people who already found a parking spot were walking about killing time. Surprisingly, I easily got a seat with no waiting at the only restaurant in town. A single waitress seemed to be running the place. Service was very slow but I had plenty of time to kill. The partial eclipse wouldn't start until 9:10 AM.

After breakfast, I worked on my camera set-up, which included a telephoto lens the size of a small telescope and a solar filter. Said solar filter was from my father's telescope, which he sold to me when he became too old and weak to move it around. He has a note with it I never noticed before on the importance of using it when viewing the sun. Unfortunately, the filter, which was basically a circular piece of plastic with a thin piece of tinfoil in the middle, got damaged in my luggage. It looked like somebody punched a hole through it. 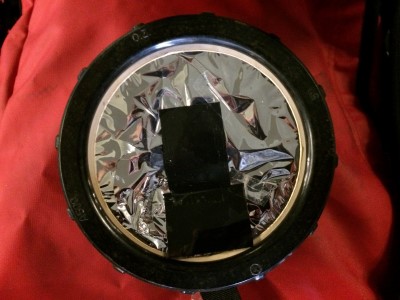 How not to photograph an eclipse.

Fortunately, the general store had a single and very overpriced roll of scotch tape for sale. Unfortunately, after my best taping efforts, there were still some holes where the sun could peek through. Fortunately, I had a pocket knife in my backpacking gear so took apart an extra set of eclipse glasses and taped the lens over the holes. Unfortunately, the image of the sun through all that tape and extra lenses was blurry and distorted. In addition, I took along a GoPro to record a movie of the whole experience. That I placed on the roof of a nearby car. The view from my own car was obstructed by a telephone pole. 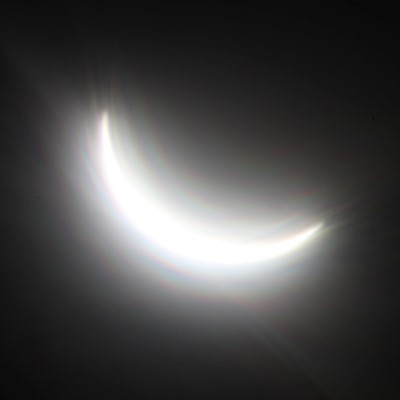 After fussing with the solar filter for the camera and finding the perfect spot for my GoPro, there was nothing left to do but wait. Exactly on cue, the partial eclipse started at 9:10 AM. I took pictures every few minutes. Later, I would learn that the devout eclipse chasers paid for camping spots at the local school. That left me as the only astronomy nerd in the town center with a heavy-duty tripod and a two-foot lens on his camera. For once in my 52 years, my interest in astronomy helped me a little with the ladies. Several seemed impressed with my setup. Of course, I kindly offered to let them view the partial eclipse through my camera. I had a nice chat with a cute Romanian woman who was there for her third total eclipse. Thank goodness the science nerds with bigger lens and telescopes were nowhere to be seen. 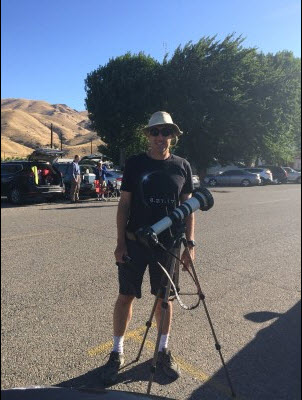 Mine is bigger than yours.

It wasn't just the ladies I enjoyed; I had a great time chatting with everyone. At this time and place everybody was there for the same reason. It was like the ideal world from the song Imagine -- there were no divisions by politics, race, or religion. Everyone was friendly and chatty. A single event united us all and at least we could share that in common.

As the minutes until totality drew closer, people took their places. The temperature dropped. The skies darkened. The crowd become more silent. My heart was racing.

At 10:24 AM the big moment had arrived. An awe-struck stir fell over the town as the sun was completely eclipsed by the moon. At this point, words and pictures cannot do justice to a total eclipse. You simply have to see one for yourself to understand it.

During my precious two minutes and nine second of totality, I took plenty of pictures sans my damaged solar filter. It was worth bringing my camera and all its accoutrements there just to be able to see the black hole in the sky magnified many times over. I also paused to appreciate it with the naked eye, as I had done seven years before in China.

129 seconds later, right on cue, the sun peeked out from between the mountains of the moon, first as a bright slice of light and then quickly becoming a thin crescent. At this moment, the crowd cheered and applauded. It was an event very worthy of applause.

On the downside, the stars and planets did not seem to be visible during totality. I would later learn there were forest fires in central Oregon, which I think left the skies in eastern Oregon hazy. Eclipse watchers in central Oregon had it much worse.

Also, my pictures and video turned out to be almost a complete bust. Everything with the solar filter was blurry. Pictures taken during totality were blurry, which I blame on an unstable tripod and me shaking the camera when pressing the shutter. As much as I like my GoPro, it did an awful job filming the eclipse. It captured the darkening of the sky and crowd reaction well, but totality itself was a dud -- just a dim spot of light in the sky. I had hoped to post it on YouTube, but it isn't worthy. You can see here some of my better shots, but I'm pretty disappointed with them. If there is any upside, it will be easier to improve on the photography and videography the next time.

In the week after the eclipse, I stayed in the Northwest to climb the two Cascade volcanoes I mentioned earlier. During this process, I had many conversations about the eclipse. Many people reported being just outside the totality zone. Several times I heard comments like, "Where I was, the sun was 99% eclipsed." I didn't want to rain on their parade, so bit my tongue, but I wanted to say that seeing a 100% eclipse is about 1000 times better than a 99% eclipse. There is nothing that can compare to seeing that big black hole in the sky. My advice is that if there is ever another total eclipse within 1,000 miles, then make every effort to get inside the totality zone, known as the umbra. If the best it gets is a partial eclipse, then you're in the penumbra. To get close, but not within the umbra, is like hitting a golf ball from the tee and having the ball land one centimeter from the hole -- impressive, but it isn't a hole in one.

In closing, consider joining me for the April 8, 2024 eclipse in or near Waco Texas. If that isn't convenient, then somewhere between Ely and Wendover, Nevada on August 12, 2045. Hopefully, I'll live to the age of 80 to make it. 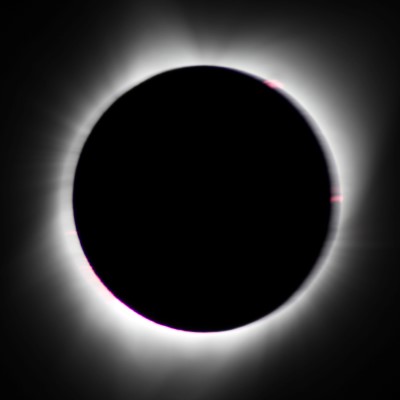 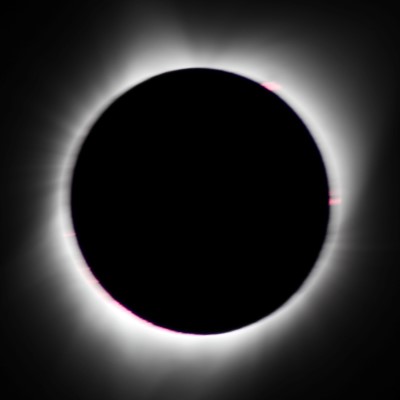 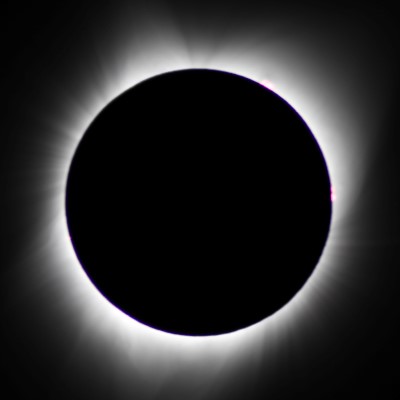