Lack of Freedom of Information Act

For the 15 years I have operated this site, I have tirelessly advocated for open and honest gambling. I strongly believe the player has the right to know the rules of any game offered to the public. In most games, the rules are stated and the odds are quantifiable. However, in the case of slot machines, the player has almost no information about the kind of value he is getting for his hard-earned dollar.

Here in Nevada, there is a law stating that any new game, slot or table, must be set to a return of at least 75%. In other words, the casino win percentage of money bet may not be greater than 25%. In addition, the Gaming Control Board, which I'll refer to as Gaming from this point forward, publishes the actual casino win by denomination over wide geographic areas. For example, this table shows the actual win for Clark County casinos for 2012. Keep in mind that in the gaming industry, the term "slot" includes all machines, including reels, video poker, video keno and electronic versions of table games. 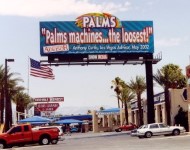 I strongly believe the player is entitled to more information than this. It was this belief that led me to spend three months surveying the slots of every casino in Las Vegas so I could publish my own survey in 2002 survey of the video slot machine return percentages, which was publicized for years by the winner.

I must admit, the survey is getting out of date. I am asked once in a while if I will ever repeat it, but I have no plans to. It would take months to complete, and I would earn exactly nothing for my efforts. However, an idea for an easier way to get even better information was born in 2011.

On August 8 of that year, I was wandering around downtown, as I often do, looking for new games or anything else to write about. Signage all over the Las Vegas Club caught my eye. It claimed they had the "loosest slots downtown." So, I sought proof of this claim, but my calls to Jack Budde, the slot machine supervisor at the LVC, were never returned. I write all about it in my forum titled, Vegas Club claims to have loosest slots downtown.


After three unsuccessful attempts with the Las Vegas Club directly, I wrote a letter of complaint to Gaming. On August 15, 2011, an agent, whose name I didn't think to remember, called me to state that the claim by the Las Vegas Club was indeed true. He added their claim was challenged the previous March as well. When I asked how he knew, he mentioned a spreadsheet showing the actual slot machine returns by casino downtown. When I asked for a copy of said spreadsheet, he told me to ask a particular person at the headquarters in Carson City. However, when I followed up with said person, she claimed to not know about it.

Regarding the Las Vegas Club, I don't know anything about the investigation conducted by the Gaming Control Board. However, the story ended with the casino taping over the word "loosest" with the word "best" on all the signage. That placated me about that issue, and my thanks to Gaming for a job well done. However, I still wanted that spreadsheet.

Over the next year, I broached the topic with various attorneys. Most said I could invoke the Freedom of Information Act (FOIA), but it would be an expensive fight, which I would probably lose. Once in a while I can get a kind-hearted attorney to help me on a pro-bono basis in my never-ending efforts to keep the casinos open and honest, but not this time.

However, in late 2012, I was discussing this topic with one of my many attorneys Brandon Phillips. He seemed to believe in my cause and was eager to take the case. We agreed on a friendly rate, and we were both off on our first experience with the Freedom of Information Act.

Step one was simply asking Gaming for the information we sought — slot machine return percentages, broken down by denomination and casino for every property in Clark County with gross gaming revenue over $1,000,000. Not surprisingly, we were turned down flat.

Step two was to officially request the courts for such information with a writ of mandamus. In layman's terms, a request to the court for something the requestor feels entitled to under the law. Here is a copy of the request (PDF). Our argument was basically that the information we sought was not specifically protected by Gaming, and thus, per the FOIA, we were entitled to it.


Step three to was to submit our opposition to the motion to dismiss (PDF - 8270K). Our argument that (1) we were not asking for specific information about gaming revenue and it would be impossible to infer revenue information from what we were asking for, (2) per my experience with the Las Vegas Club, Gaming did in fact have the information available in the form of a spreadsheet, and (3) slot return percentages are a commonly used metric in the industry and not some obscure statistic.

On March 18, 2013, I finally had my day in court before judge Mark Denton. Both sides were evidently ready to be heard. I even put on my suit, which I hadn't worn since my last days at the Venetian, seven months before. However, the court evidently was confused about whether the issue was the request to dismiss the case or to hear the case itself. So, the judge said he was denying the request to dismiss, but he was not prepared to hear arguments at that time. Evidently, in an effort to familiarize himself with the case, he asked both sides to prepare an additional brief stating their position.

Click image to watch video.
Finally, on April 11 at 9 AM, we truly had our day in court. It is even captured on video, for which I paid for a copy of and uploaded to YouTube. As you can see, both sides made the same arguments we had been making for months. Then, after 12 minutes, without any give or take like you see at the Supreme Court, the judge denied my request without explanation other than I failed to meet the burden showing that Nevada’s Open Information Act applied to Gaming in the present situation.

So, I fought the law, and the law won. No big surprise there. Before the big day, I made a wager with my attorney: my $100 to win $5 that the outcome would go as it did. It would have been nice if the judge at least appeared to consider the pros and cons of the case. Most of my knowledge of the legal system comes from Judge Wapner, who always had the decency to explain the law and reasons behind his verdicts. Personally, I think there were bigger powers at play, and the outcome was predestined. Anyway, at least I won $5, to offset the roughly $3,000 I spent on the case, which I consider a very fair price, I might add.

So, after all that money, meetings, phone calls and emails, I lost. Nevertheless, I would like to thank my attorney Brandon Phillips for his hard work and excellent service. If you ever need an attorney, for just about any reason, in Las Vegas, please contact Brandon through abetterlegalpractice.com.