Home › newsletter › Casino Scene in For Your Eyes Only

Casino Scene in For Your Eyes Only


This is the third in a series of newsletters examining the casino scenes across the “official” James Bond movies. In the previous two newsletters I broke down the casino scenes in Dr. No and Thunderball. This week we skip ahead eight movies, 16 years, and two Bond actors to the 12th Eon-made Bond file, For Your Eyes Only. I plan to go cover all the chemin de fer/baccarat scenes first, in chronological order, and then go through every other game Bond played, again in chronological order.

The movie we see Bond playing in Dr. No, Thunderball, For Your Eyes Only, and Goldeneye is chemin de fer, although it is referred to as baccarat in Goldeneye. More about that next week. I don’t want to go through the rules of chemin de fer again. For that, please refer to my page at Wizard of Odds on the game. Suffice it to say it is a player-banked version of baccarat with some free will in strategy.

This newsletter shall refer to the scene as seen on YouTube . It takes place at the Achilleion Palace in the city and island of Corfu in Greece. The scene opens with the croupier saying, if my French is correct, that the banker (Bond) has wagered one million, in what I must assume are Greek drachmas. The only player to go against him is Bunky for 500,000. The other players at the table could have bet, since nobody bet the full million, but nobody does.

At the 0:12 point the cards are dealt. Bunky, with the Player Hand, reveals a natural 8. At the 0:27 point we see Bond reveal a five of diamonds and the queens of spades, for a total of five point. However, what follows is the croupier announcing a total of neuf (nine) for the Banker hand, Bond being paid and a clearly unhappy Bunky amidst an “unfriendly shoe.” This can only be explained as a horrible editing error. What must have happened, based on context and the croupier’s remark, is Bond had a natural 9, beating Bunky’s 8. Whoever edited the movie obviously used footage from the next hand, which I shall soon explain further.

What happens next is some banter in which Bunky is goaded into increasing his bet to the maximum one million drachma wager. This gives him the right to go against Bond alone. Meanwhile, another character, Kristatos comes along, who Bond came to Corfu to meet with.

At the 1:15 point, we see Bunky drawing a third card. Then, per the rules of chemin de fer, Bond reveals his two-card total of five. Note it is the exact same five of diamonds and queen of spades seen in the first hand, further evidence of an editing error in that hand. Bunky and his companion Contessa seem happy with the third card. The card is not shown, but for reasons I shall get into, must have been a four. This would seem foolish to convey such information to the banker, who still has the free will to draw or not. It would be like a dog playing poker wagging his tail after hitting a four of a kind on the river, including a pocket pair.

At the 1:27 point, Bond has yet to decide whether to draw or stand. Kristatos, standing behind Bond, says “The odds favor standing pat.” Pause. What is going on here? Let’s review the rules of chemin de fer, according to how the game would have been played in the late 20th century. There are only two situations where the banker has free will, as follows: 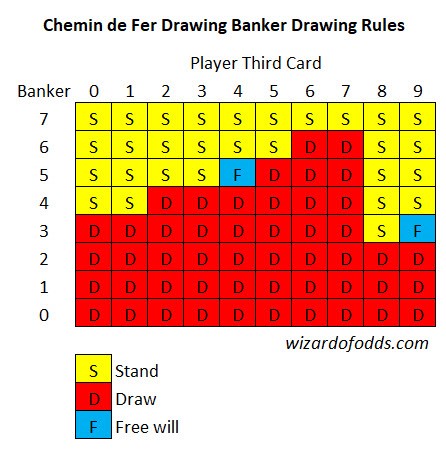 We already see that Bond has a total of five, so Bunky must have drawn a 4. What should Bond do in this situation? We see Kristatos say “The odds favor standing pat.” To which Bond says, “If you play the odds.” Bond then draws a third card.

Before going further in the scene, let’s see what the odds really do favor. While the player acting on the Player Hand has free will to draw on a total of five, the odds strongly favor doing so. It is easy to assume that is what Bunky would do. That said, here are the probabilities for Bond if he stands:

The following are the odds if the banker hits five against a four.

So, Kristatos was wrong, the odds favor drawing, by 0.61%. This analysis doesn’t consider the fact that Bunky has a good hand, which a five wouldn’t beat, unless Bunky was giving off a false tell. Whether you look at math or psychology, Bond is correct in drawing a third card. We then see Bond respond to Kristatos with, “That is, if you play the odds.”

We then see Bond drawing a four, giving him a winning total of 9. We never see Bunky’s cards in this second hand, but he probably had a total of eight, much like in the first hand.

The scene ends there, Bunky further depressed with the “unfriendly shoe,” Contessa leaving Bunky without so much as a good-bye, and Bond walking away a winner and tipping the croupier, of course.

Next week we will move ahead to Goldeneye. Until then, may the odds be with you!