Except for Casino Royale, which I’m saving for last, we have looked at every casino scene in official (meaning made by Eon Productions) James Bond movies in recent newsletters. This week we’ll look at the golf scene in Goldfinger, which had some serious betting. You can find the scene on YouTube. I will refer to this clip in this article.

The scene starts where Bond and Goldfinger finally meet at the golf course and agree to play for a shilling a hole. If I’m not mistaken, a shilling is to the pound what a nickel is to the dollar. Even considering inflation, I find this to be a very small bet for the two of them, especially Goldfinger, who owns the golf course. Then again, I wouldn’t bet very much against a golfer whose skill level I didn’t know much about. 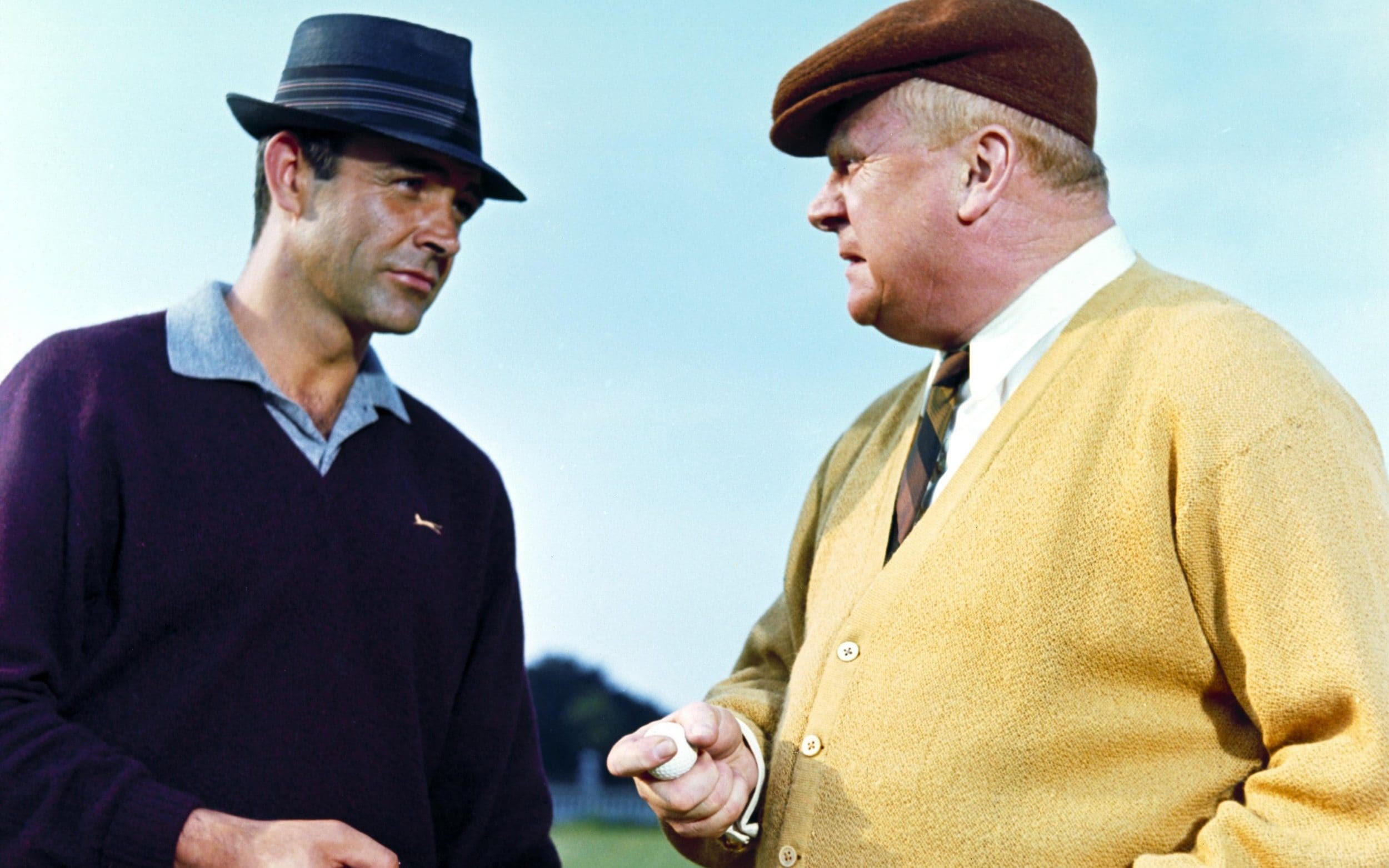 At the 0:54 point, we see Bond making an outstanding putt at what looks to be about nine feet. I wonder how many outtakes were left on the cutting room floor.

At the 1:23 point, we see Goldfinger’s putt strangely curve towards a bar of gold, as if it were magnetically attracted. Also note he doesn’t putt from the new location. I could see Bond saying it’s a “gimme,” but he doesn’t. Remember, they agreed to play “strict rules of golf” when they met, which I would think entails having to make even a one-inch putt. After all, Hale Irwin once missed a two-inch putt in the 1983 British Open, which I believe cost him the match.

At the 1:50 point, they are about to tee off on the 17th hole, where they are “all square.” As Bond is about to tee off, they discuss a wager – Bond’s gold bar vs. £5000 pounds. By the way, I estimate that bar to be worth today about £130,000, based on a weight of 100 ounces. Let me say that in my opinion this wager was never properly confirmed. Goldfinger offers the wager and Bond just says “naturally” and hits the ball. Maybe I’m overly pedantic over such things, but I have had several arguments about whether a bet was properly confirmed or not that I am very careful to state the terms of a bet and ask the other party to say, “I confirm the bet.” If they say anything else, I will stand there and demand they say the word “confirm.” This happened to me recently, over a bet on the Dallas vs. Tampa Bay game. It is a common trick of douches with no character to use vague language in making a bet, so they can weasel out of it if they lose, freerolling the bet. If you haven’t fallen for this trick already, then please remember this warning.

At the 2:40 point, we see Goldfinger make a lousy drive on the 17th hole into the rough. If I’m not mistaken, the rules of golf at the time would say he gets five minutes to find his ball. Otherwise, he must hit again from the tee with a stroke penalty. I believe this five-minute rule has been since lowered to three minutes.

What happens next is both players cheat. We see Goldfinger’s caddy dropping an identical ball through his pants, falsely claiming to have found the original ball. We also see Bond standing on the true original ball. Going back to the 2:40 point, it looked like Goldfinger hit the ball close to the trees, but where Bond was standing on Goldfinger’s ball was close to the fairway, but let’s not get too critical.

At the 4:15 point, we see Bond having to make a three-inch putt, which I find appropriate. However, it goes to my point that Goldfinger should have had to make the earlier putt, after the ball curved by the bar of gold. At the 4:32 point, we see a critical scene where Bond switches balls on Goldfinger, a Slazenger 1 to a Slazenger 7.

At the 4:52 point, we see Goldfinger go out of turn. I think Bond quietly lets him go first to give him less time to notice the ball switch. If I’m not mistaken, the rules of golf say that if you go out of turn, your opponent can insist you re-hit the ball. While there is no penalty, it gives the opponent a strong edge in making the player going out of turn re-hit a good shot, but let a bad shot remain. While Goldfinger hit a good shot, Bond cleverly kept his mouth shut. The alternative would have given Goldfinger more time to notice the switched ball.

At the 5:29 point, we see another strange ball-curving putt.

At the 5:37 point, Bond confronts Goldfinger about playing the wrong ball, losing the hole and the match. Pause. It is my understanding that players are allowed to change balls between holes. Professional golfers often switch balls every few holes, because the slightest damage to the ball will harm the aerodynamics. While it was a very dramatic ending to the game, I think it’s not consistent with the rules of golf.

Even if we assume they made a deal to use the same ball the entire match, Goldfinger, who has already been shown to cheat at both gin rummy and golf, could have denied the switch. It would have been up to Bond to prove the switch, which he wouldn’t have been able to. However, Goldfinger may have been caught off guard, so I can see him falling for the trick.

Despite my nit-picking the scene, I love it! Goldfinger is high on my list of favorite Bond movies and this scene is one of my favorites in the movie. We don’t see patient scenes like this in Bond movies any longer. No, these days it’s a roller coaster ride of chases and explosions from beginning to end.

Next week, I hope to look at Casino Royale. When it comes to gambling, poker is not my strong suit so we may have a special guest author writing the article.