In this part four of my series of casino scenes in James Bond movies, I will analyze the casino scene in Goldeneye.

Here we find Bond at the Monte Carlo Casino. As usual, he is playing chemin de fer, but this time it is referred to as baccarat for the first time. I am not sure whether to file this under a character error, a matter of French vs. English, or the name of the game simply mutated through the years. Once on Jeopardy there was a clue along the lines of “This is James Bond’s favorite casino game.” A contestant answered, “What is baccarat?” and it was scored as a correct answer. I assume they also would have accepted chemin de fer, which is what I blurted out. Whatever the name of the game, let’s talk how it was played in Goldeneye.

I shall refer to a clip of the movie found at YouTube. Bond arrives to the table at the 1:11 point and says “banco,” meaning he wishes to wager the maximum bet one-on-one against Xenia Onatopp who is already at the table, acting as the banker. After the usual banter, we see Bond lose with a seven against Onatopp’s natural 8. This is a rare time, in any James Bond movie, we see Bond lose a hand. Spoiler to next week’s newsletter, he also loses a hand in On Her Majesty’s Secret Service.

Next, Onatopp invokes her privilege as banker to double the bet, to what I assume is two million French francs. Bond rises to the occasion and says “suivre,” which literally means follow. In terms of the game, it means he wishes to bet the full amount, again, by himself. At the 2:10 point, Bond says “carte,” meaning he wishes to draw a third card. Onatopp reveals her two-card total of five and deals Bond a 6.

What happens next doesn’t make sense, either in terms of the rules or strategy. In modern baccarat, with forced drawing rules, the Banker Hand would draw with a six or less if the Player Hand drew a six. In the version of chemin de fer that would have been played at that time, there is some room for free will, but this situation is not one of them. Instead, the Banker Hand would be forced to hit.

However, as I understand it, in the early 20th century, both sides had free will in every situation, as long as neither side had a natural 8 or 9, which froze both hands at two cards. Assuming they were playing this older version where Onatopp would have had free will, she made a bad play. It is easy to Assume that Bond had a total of 0 to 5, given that he drew a third card. Here is the probability he had each of those totals:

After the six, here the probability at each of Bond’s new score:

The only possible final scores Onatopp’s five will beat are a 0 or 1. The chances Bond started with a 4 or 5, resulting a 0 or 1 after the six, is 30.5%. According to my math, here are the possible outcomes if the Banker Hand draws in this situation:

It comes down to Onatopp having a 39.0% chance of winning by drawing and 30.5% by standing. The odds obviously favor drawing.

At the 2:34 point, we see Bond revealing a two-card total of zero. With the six, that gave Bond a final score of six, beating Onatopp’s five. 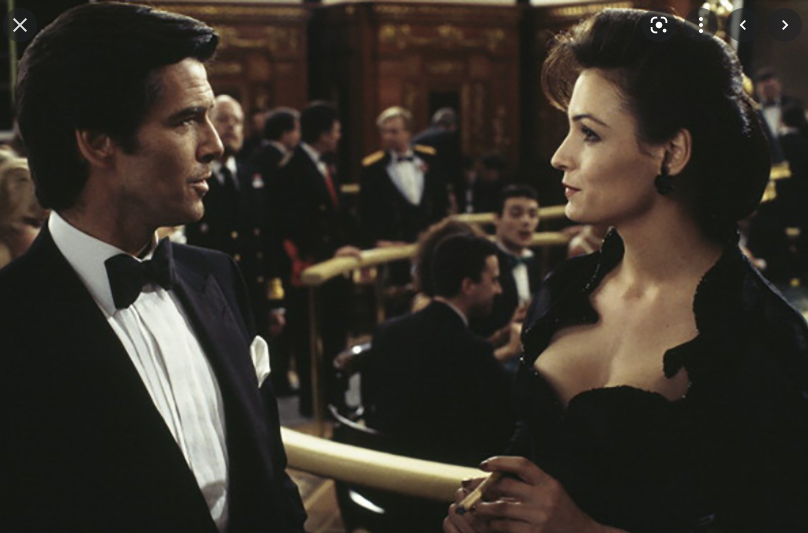 I can’t help but mention that at the 3:52 point Bond reveals his expertise in another area of my own expertise – license plates. Here Bond explains that French license plates for the current year begin with the letter L. Earlier, at the 0:32 point, Bond spots a counterfeit license plate on a Ferrari in the casino parking valet lot beginning with a 4. Perhaps he didn’t mean the very first character, but the first letter. It looks to me like the letter on the license plate is an N. As much as I try to dislike the Pierce Brosnan Bond, this show of license plate knowledge makes it hard. Fair warning, unless you want to avoid being bored silly for at least half an hour, never ask me a question about license plates.

In closing, this is not one of my favorite James Bond casino scenes. It has some good banter, but the card play is not conveyed well to the viewer and shows a player making a terrible decision she was not allowed to make in the first place. It’s not as bad as the awful scene in For Your Eyes Only, which I covered last week, but not as good as the scenes in Dr. No and Thunderball.

Next week, we will have a final look at Bond playing chemin de fer in the movie On Her Majesty’s Secret Service.