In my last newsletter I said this would be my final James Bond newsletter, analyzing the poker scenes in Casino Royale. However, a reader reminded me that I never once mentioned the blackjack scene in License to Kill. He was right. Forgive me forgetting that movie as it is one of my least favorite Bond movies and I find the casino scene stiff and unrealistic. 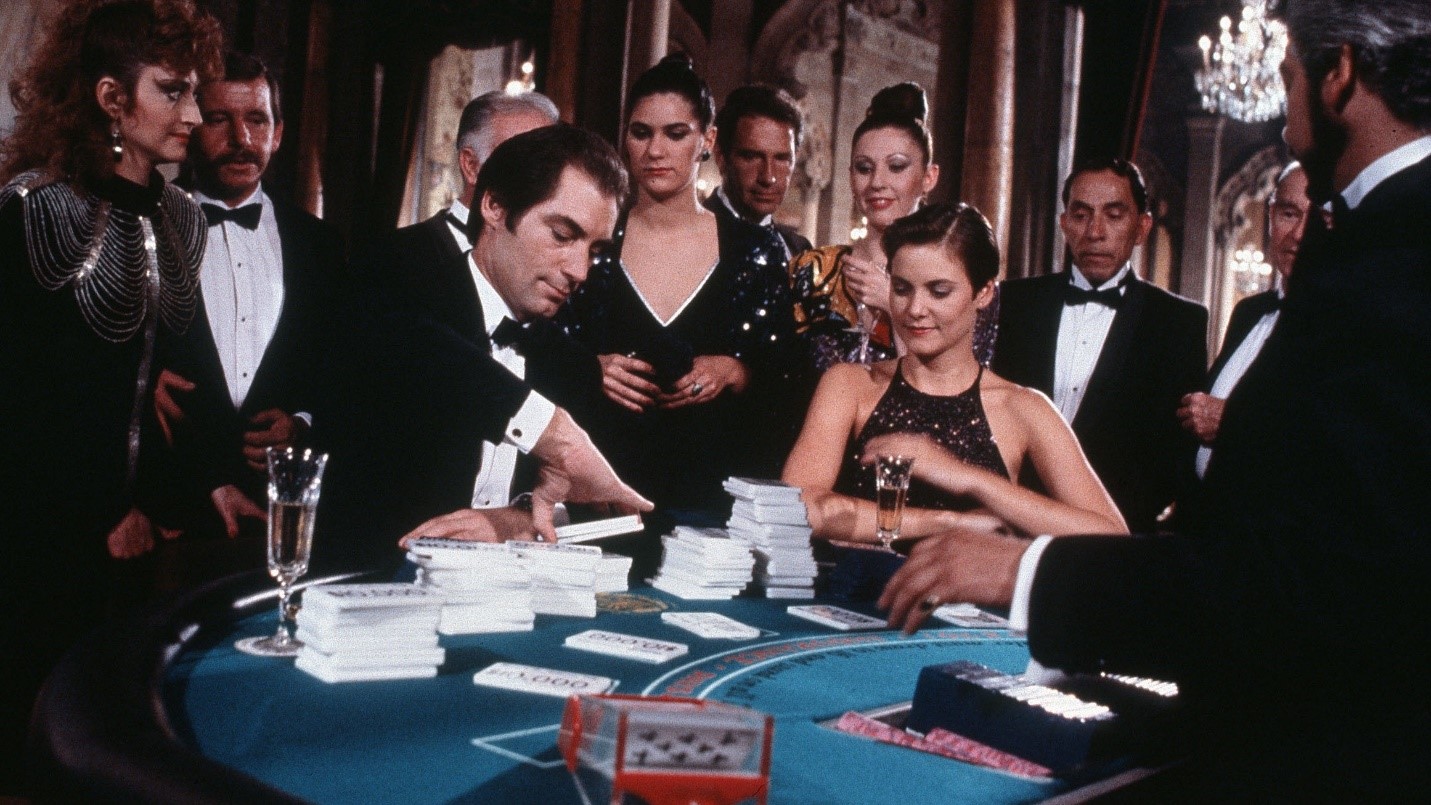 For purposes of this newsletter, I’ll refer to a clip of the scene found on YouTube. It takes place at the fictional Casino de Isthmus City. Two things I find annoying already.

Second, pick a language and stick with it! I find it annoying when business names and products mix up two languages, usually English and Spanish. Here we the casino using the Spanish “de” in place of the English “of” but they stick with English for “city” and “isthmus.” I think they should have used Spanish, in which case I would have with “Casino de la Ciudad de Istmo.” By the way, if you search for new casino chips on Ebay, for some reason chips from this fictional casino always populate the list of search results. Don’t be tricked into paying a lot of money, there is a surfeit of them out there.

Thank you for letting me rant. Now, let’s get back to the casino scene. We seen Bond playing blackjack by himself, playing five hands at a time. The first two hands seen he is playing against a shoe and the third hand against a single deck. We’ll get to that mystery later. Here are some other rules we can figure out:

Hand #3 begins about the 3:33 point where a new dealer suddenly appears. Not only that, but the game changes from using blue cards in a shoe to a single deck of red cards. Bond obviously senses something fishy and asks, “Am I going to win or lose?” She kindly says “lose.” We then see her flip over a blackjack, beating five pat hands Bond stood on. I can only clearly make out a 19, 19, and 18.

What strikes me as very unrealistic is a shortage of small cards. We never see a 2, 3, or 4 in all three hands played. The following table shows a count of every rank I could clearly make out between the three hands.

A chi-squared test of this distribution has a p value of 0.7654%. In other words, a random selection of 35 cards, dealt with replacement, would have a 1 in 131 chance of the distribution being this lopsided or more.

I could mention that 29 of the 35 cards are in the range of 8 to king. That chances of that, assuming replacement, is 1 in 138,255. However, that seems like I’m taking to much liberty designing my test to make the results look bad.

How about the fact that in 15 hands played, Bond never once hits as his first action? Assuming basic strategy, six decks, the dealer stands on soft 17, and the dealer does not have blackjack, here are the probabilities of all possible plays as a first action.

The probability of not hitting is 60.22%. The probability of not hitting 15 out of 15 hands is 0.6022^15 = 1 in 2015. You could nitpick this figure, saying this assumes a fresh deck for each hand and Bond should have hit 16 vs. 10. I could come back and say playing five hands at a time makes it even more unlikely to get five pat hands at the same time, given the effect of replacement. I am not saying my 1 in 2015 figure is exactly right, but it should be very close. Never mind Bond didn’t hit either of his hands after splitting either.

Unless I remember another Bond casino scene I forgot about, next week we’ll look at Casino Royale. Until then, may the odds be in your favor.