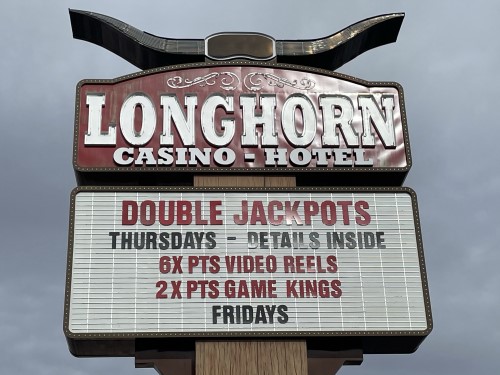 I have not done much gambling in the last year. For the most part, the casinos were either closed or any perceived advantage was outweighed by the danger of catching the coronavirus. However, a play last Thursday merited an exception. The following sign on all the machines explains the basic rules in Spanish. 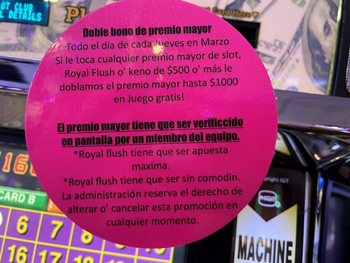 Here is my translation:

Double Voucher for the Top Prize

All day each Thursday in March.

The top prize has to be verified on the screen by a team member.

*Royal flush has to be at the maximum bet.

Management reserve the right to alter or cancel this promotion at any moment.

A Wizard of Vegas forum member and I made a deal for information about the play. Several other forum members were there as well. The promotion started at midnight and I arrived early to secure a machine. Every good machine in the casino was taken and I was probably fortunate to get the one I had.

As the rules mention, free play vouchers were given for the doubled portion of any qualifying win. Much of my time was spent waiting for said vouchers. The entire casino, which is small, I think had only two employees writing them for a lot of players hitting wins the requisite $500 to $1000 range. They worked hard and I never felt they were slow paying winners or showing favoritism to anybody.

At 5:30 AM, somebody came over the public address system to say that the promotion was cancelled per management decision. The Longhorn's sister property, the Bighorn, also ran the same promotion. I hear they cancelled it earlier, around 3:00 AM.

Yesterday, on Tuesday, I returned to redeem my free play vouchers. My first order of business was to attempt to spend my points on Longhorn swag. I heard other players who did the promotion were informally 86'd, so I wanted to spend my points while I still could. When I presented my card at the player club desk, the woman working there said, "The manager would like to speak with you."

Immediately said manager came out to see me. He shook my hand and was very friendly. In his office, he acknowledged that in retrospect the promotion was too generous and a costly lesson for them to learn. He added that he fully intended to honor all vouchers redeemed within a week of the promotion. The vouchers did not state an expiration date, but he said there was one in the official rules, which I still have never seen, and they had the right to alter them. Fortunately, I redeemed them in time, per the advice of the forum member who told me about the play.

When it was all said and done, my net profit was $7,454. I have been asked to not write about what game I played and how. Axel has requested that there not be any posts regarding the strategy for promotions such as this.

As far as I know, the promotion is still good, but only for slots. I don't perceive any value playing that game for this promotion, but maybe I'm wrong.

This topic is discussed in the thread Long Horn Double Jackpot Promotion at Wizard of Vegas.