Get the Dunce Cap Ready (Again)


In 2009, 60 Minutes did a piece on Mensa, a well-renowned international organization and community for highly intelligent people — to be specific, individuals who qualify to join must score within the top 2% of the total population on a select list of professionally administered tests. Varying with each accepted test, the minimum IQ score is 130. Am I that intelligent? I do not know. I’d like to think that I am near the borderline and within the margin of error of IQ tests (15 points).

I can’t find the original story online, but there is a condensed version of it on the CBS Sunday Morning show. Ever since then, I have wanted to join. I seem to draw highly intelligent yet quirky people into my life like a magnet. Meanwhile, normal people seem to view me as being socially awkward and honest to the point of rudeness. I have always thought it would be a good thing for such square pegs like me to have a place to their own. Is Mensa such a utopian little society? I do not know as I am not a member. However, based on the 60 Minutes piece, I am optimistic it would be.

After that 60 Minutes piece, I inquired of the Las Vegas chapter of Mensa about being tested for admission. I was invited to come down to their Henderson office to sit for it. For what I recall was a modest fee, a Mensa member proctored me through the exam. As my lousy memory has it, the entire test was multiple choice.

After I finished, the proctor, a nice and talkative lady, explained that she could only give me a pass/fail grade. She explained that Mensa used to give the exact IQ matching one’s performance, but in the recent past somebody’s self-esteem was damaged by said measurement and then sued Mensa for the subsequent mental anguish.

After the Mensa proctor graded the test, which did not take long, she returned to the room I was waiting in. It was a thumbs down. While she couldn’t provide a numerical score, she strongly urged me to try again and suggested other tests that Mensa would accept. After spending some time licking my wounds, I did not make an effort to take a qualifying test again until very recently. It was not a conscious decision; but I probably did not want to face the humiliation of failing again and paying to do so, at that.

Fast forward 11 years and somehow this topic came up with a friend. She seemed to know a lot about IQ tests and she had her daughter tested, who scored somewhere in the genius range. To make a long story short, we challenged each other to take it. In my case, re-take it. She kindly made an appointment for me with an independent psychologist licensed to administer the test.

Fast forward again to today, where I just finished taking said test. I took the Wechsler Adult Intelligence Scale (WAIS-IV) which consisted of ten parts, took around 90 minutes and cost $250. This time, it was only a Psychologist and I in his office near the Summerlin Costco.

I arrived with a pencil holder chock full of sharpened number twos. However, they would not be needed. Most of the test was verbal. I think only two parts involved writing anything. He explained that some parts of the test would be timed and others would not. Most of the questions would start out rather easy and gradually get harder.

The experience is somewhat of a blur, but here is what I recall in no particular order:

After the test, the proctor asked if I had any questions. I had two only, which I am sure everybody asks. The first was what would happen next. He said he would evaluate my results this week and send me (by choice of Email or postal mail) the results. The results will not solely be a single IQ number; it will also detail my strengths and weaknesses in each area of testing.

I then braced myself and asked: “How did you think I did?” The proctor said I did well in some areas and “average to high average” in others. He also said that the application he uses to compile the results of the testing responses sometimes surprises him with the final scores. Through this he kept a poker face and did a good job at being vague – erring on not getting my hopes up. Or perhaps, I totally blew it and he was giving me a little false hope.

After leaving, I went to the bathroom and was washing my hands when the proctor came in. At the time I was trying to recall who wrote Alice in Wonderland, which I am embarrassed to not know cold, as the book has a lot of logic puzzles and jokes in it. I find intelligent people use analogies from Alice in Wonderland often. Unfortunately, by the time he asked this question (almost at the end of the test) my brain was fried. All I could think of was “Lewis Clark,” which probably was in my head from my long-winded answer about Sacagawea. Anyway, in the bathroom, it came to me and I blurted out as the proctor was taking a piss, “Lewis Caroll!” The proctor laughed and said “Correct!”.

When I got home, I told my friend who initiated this whole thing that I was humbled and not confident I did very well. She has more confidence in me than I do. As usual, when faced with a disagreement, I offered a bet and she accepted. My side of the bet is $100 that my results will NOT qualify me for Mensa.

Now, it is a matter of waiting until I get the results. My hopes are not high, and I am preparing myself for another intellectual humiliation. I am used to it, as I take the Jeopardy test on an annual basis and have never even made it to the second level of screening. When I applied to be on Survivor, I didn’t even get the courtesy of a rejection. I’ve also applied to be on The Weakest Link and Tic Tac Dough and didn’t meet their qualifications either.

Whatever happens, I will be okay. Next week I will share my results with you. 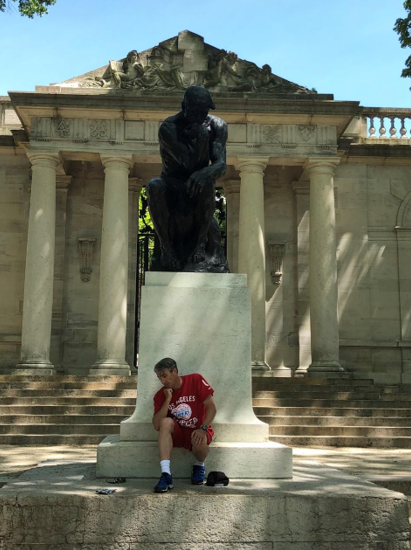 Me thinks I’m going to fail my IQ test